What If the Big Rip Happened Tomorrow?

Would you live in complete darkness? When does a total solar eclipse occur? What would happen to the Moon?

A dragon devouring the sun, a giant puma demon, a pair of sky wolves. Throughout history and across cultures, an eclipse has been interpreted as a perplexing or fearful event.

Even the 2017 total eclipse raised claims of impending apocalypse by evangelist groups in the U.S. But what if the next eclipse didn’t end?

This rare planetary alignment would suddenly become a normal occurrence. But don’t worry, you wouldn’t live in the Moon’s shadow all the time.

There are two parts of the Moon’s shadow. The umbra is the dark center, and the penumbra is the outside edge, where only part of the Sun is blocked by the Moon.

The umbra has a diameter of 267 km (166 miles), which is about the size of the state of West Virginia in the U.S.
Because of the Earth’s axis, this large shadow would sweep across different parts of the globe during different seasons.

The rest of the planet would be in the penumbra. You’d still get sunlight, just not as much as you used to, and life would certainly be a little dimmer. Existence on Earth is closely tied to the transition of day to night. A total solar eclipse would disrupt this pattern and wreak havoc on other natural cycles.

Under the umbra, the temperature would drop about 5 degrees Celsius (10 F). Even minimal fluctuations have significant impact.

Temperature changes and lack of sunshine are not great for agriculture, so we would have to get creative with growing our crops in this new cycle of light and dark. We would also see an increase in seasonal affective disorder, or SAD. This subtype of depression occurs during long winter months in high latitudes with lack of sunshine.

You’d probably feel some of the same hopelessness and loss of energy under the Moon’s shadow. Though we’d have to come up with a new diagnosis, maybe eclipse affective disorder?

In a typical total solar eclipse, the umbra moves across the globe from west to east, lasting only about 7.5 minutes. This is because the Moon rotates around the Earth, making a static eclipse impossible.

So the only way we could see a permanent solar eclipse is if the Moon stopped rotating around the Earth. Without its own trajectory, the Moon wouldn’t be able to resist the gravitational pull from Earth, and would eventually destroy us.

If that were the case, then a total eclipse really would be a doomsday warning! Observing a total solar eclipse is a once in a lifetime opportunity. Let’s hope it stays the marvel it is.

Life on Earth relies on the predictable pattern of the Sun and Moon, and we would be in big trouble if our orderly cosmos changed. 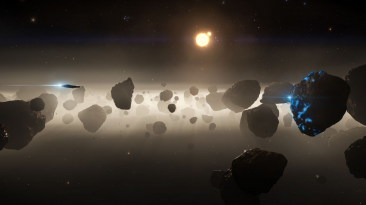 Space is full of treasures. Literally. If we were able to extract the resources from the rocks in the asteroid belt alone, we could give $100 billion to every...

If time travel is possible, why haven’t we met a single time traveler yet? And if we did meet one, how would we know they weren’t faking it? What would their...

Life on Mars might be like this. You’d live in giant glass domes, and grow small portions of food inside. And if you happen to go outside, it would be in your big...