How to Survive a Haunted House 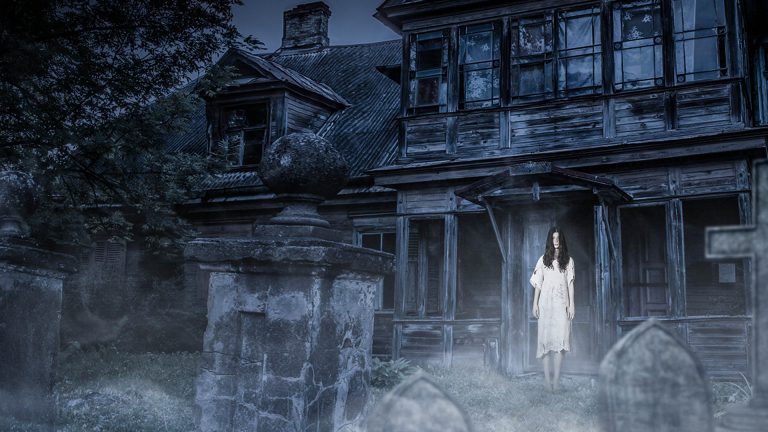 Your great aunt left you the house of your dreams, or so you thought. Now, as you listen to the sounds of scratching on the walls, you realize this is the house of your nightmares. And since you’ve seen your fair share of horror movies, you know living in a haunted house will not end well for you.

Yes, we know there’s no scientific proof of ghosts, but there are countless reports of hauntings all over the world. According to a 2019 YouGov poll, 45% of Americans believe that ghosts “definitely” or “probably” exist. And the other 55% have obviously never stayed in a haunted house.

People in a haunted house may see visual signs including “full-bodied apparitions,” or items that have moved without anyone touching them. So if you walk into the living room and find everything rearranged, maybe it’s time to call the Ghostbusters. Or someone else.

When should you call a medium? What should you do to the mirrors? And how could your spice rack save your home?

The idea of ghosts has persisted for millennia. It’s based on our interest in death and the possibility of an afterlife. And ghosts need somewhere to live, which is why haunted houses have been around for centuries too. Incidents of haunted houses in Europe and the U.S. increased significantly from 1848 to the late 1920s.

With the increase in hauntings also came the increase in people who said they could speak to ghosts and get rid of them. These people were known as mediums, but they’ve also evolved into other forms, such as ghost hunters over the years.

Greg Newkirk is one such ghost hunter, and anxious homeowners have called him to many haunted houses to determine why they are haunted. According to Newkirk, there are three types of hauntings.

An intelligent haunting, also known as the “classic haunting,” happens when a ghost notices or acknowledges the people living in the house and interacts with them. Think of Casper, or for something really dark, The Haunting.

A residual haunting is when the spirit or ghost does not acknowledge or notice the people living in the house. It may happen due to a terrible event that happened in the house. And finally, there’s the intentional haunting.

This is not a haunting by a spirit, but a belief that’s so strong it manifests a haunting. These places attract attention from people such as kids or paranormal bloggers. Whichever type of haunting you’re experiencing, here are some tips to help you survive.

If you believe your house is haunted, contacting a medium may not be the worst idea. A medium can visit and assess the home and see how strongly the ghost is attached to it. The medium may decide that your home needs a sage cleanse, which is one of the oldest methods for getting rid of bad energy and unwanted spirits.

Burning sage is scientifically proven to remove 94% of bacteria from the air and release negative ions that put people in a better mood. And if it gets rid of spirits along with that, then you should probably open some windows and doors, so they have somewhere to go.

Mediums often recommend that you keep a sense of control and “make a firm statement” towards the intruding spirit. This can include saying out loud that you want the ghost to stop or leave.

Remember, people who mock the supernatural are generally the first to be harmed by a ghost. This is not the time to clown around. And if you believe the movies, don’t keep dolls around. Especially clown dolls or anything resembling Annabelle.

The phrase “the mirror is your enemy” takes on a new meaning when your home has a ghost. According to some cultures, spirits can become trapped in mirrors. So cover all the mirrors.

Step 4: Stay With Others

We’ve seen this countless times in haunted house movies. There’s always a person who goes to check on the noise and never comes back. If something is going bump in the night, have friends or family stay with you in the haunted house. This will help assert your presence. And you’ll be less likely to feel anxious and jumpy.

If you do encounter something floating near you, you may want to be able to run away. So wearing high heels may not be helpful.

Whether you do or don’t believe in paranormal, you must get your home checked for carbon monoxide leaks. Carbon monoxide poisoning can cause memory loss, confusion, emotional instability, disorientation, and hallucination.

If your home has a faulty or abnormally functioning furnace, it could produce carbon monoxide fumes, and they could poison you. Often, after the carbon monoxide leaks are fixed in “haunted” houses, the hauntings stop.

Top 3 Worst Places to Swim in

What If a Megalodon Shark Fought the Kraken?