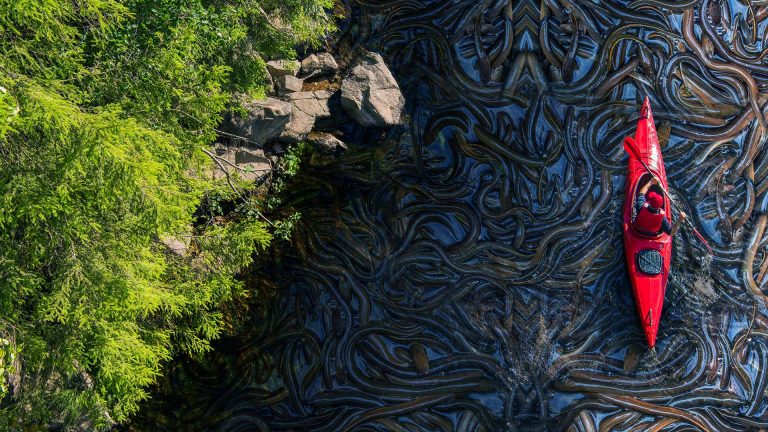 Snakes on your left. Snakes on your right. Giant cockroaches behind you. And in front of you, the open sea. It’s difficult to get to this island in the first place. But it’s almost impossible to get out alive.

About 33 km (20 mi) off the coast of Brazil, near the state of Sao Paulo, there’s a place so dangerous that it’s uninhabited and closed to visitors or tours. Ilha da Queimada Grande, also known as Snake Island, is only 430,000 m2 (106 acres). But it is home to a lot of danger.

It’s estimated that there is at least one snake per m2 (1.2 sq yard), and about 4,000 of them are golden lancehead pit vipers. They’re one of the deadliest snakes in the world. This place is feared even by local residents, who tell stories of people going to the island but never coming back.

How deadly is a golden lancehead’s venom? What other creatures are on the island? And why could pirates be a problem too?

Unless you’re in charge of fixing this lonely lighthouse, there’s no reason for you to go to Snake Island. But if you arrive there by accident, how could you survive?

If you go sailing or fishing near the Island, you’d better keep your distance. Snake Island is surrounded by rocks. So it is dangerous to swim near it, and it could break your boat.

In late February of 2019, a small fishing boat with six men got caught in a storm. It began sinking near Snake Island. Knowing exactly which island they were near, four of the men decided to swim to shore. The other two remained in the boat, choosing to die on their own terms.

Then they spotted a boat going near the island and quickly swam to it. The boat picked them up and delivered them to the nearest emergency room on the coast.

Step 2. Watch out for cockroaches

Lethal vipers are not the only threat on Snake Island. There are many nonvenomous snakes, giant cockroaches and locusts that cover the island. If you’re anywhere on Snake Island, you should regularly check for these not-so-little critters. And try to avoid them the best you can.

On the other hand, if you have a strong stomach, they could save you from starving. Cockroaches are safe to eat and a good source of protein and essential amino acids. Bon appetite!

Step 3. Deal with the snakes

If you’re stuck on this island, you will have to face the snakes. Try to find a stick. It will help you fight the snakes off and prevent them from biting you. If you get bitten, prepare to suffer.

Since the golden lancehead pit vipers on the island evolved naturally, they developed a venom up to five times stronger than a regular lancehead viper’s. This powerful venom causes severe physical complications, including kidney failure, brain hemorrhaging and intestinal bleeding.

It also can cause muscle tissue to die. So you’re going to feel as if your skin is melting. Take off any rings, watches and bracelets, as they could become really hard to remove if an arm begins swelling.

If you have an EpiPen, use it to treat symptoms of anaphylaxis, like swelling of the face, mouth or throat, hives or difficulty breathing. The only way to increase your chance of surviving is with medical help, which takes us to our next step.

Only biologists and researchers visit the island. They study the golden lancehead pit vipers. And the Brazilian navy visits once a year to maintain the lighthouse, which has been automated since the 1920s.

The government requires that every team that visits the island includes a doctor. If a golden lancehead bites you, you have a 7% chance of dying. Being treated by a doctor can reduce those chances to 3%.

Despite the island’s dangerous snakes, wildlife smugglers, also known as biopirates, have made frequent stops to trap and sell the snakes. A single golden lancehead pit viper is worth about $10,000-$30,000 on illegal markets.

And since this is the only place where they exist, the golden lanceheads are listed as endangered on the International Union for Conservation of Nature’s Red List. You escaped Snake Island alive, but it’s not the only dangerous place around South America.

What If We Could Reheat the Earth’s Core?