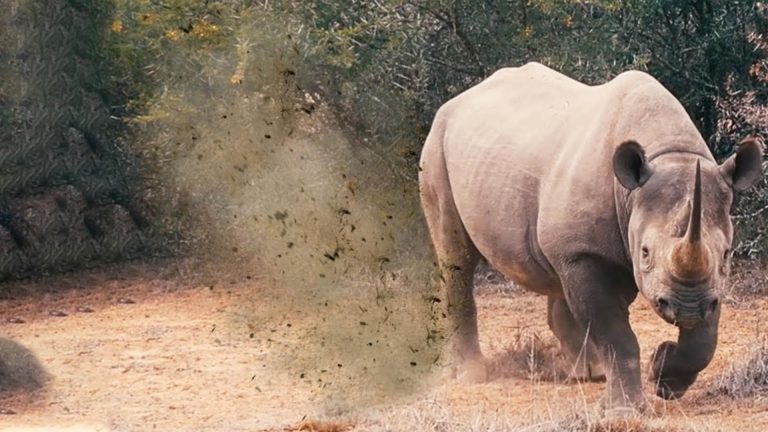 Though they’re powerful and fast, black rhinos could not outrun the black market demand for their horns. Nature parks, like the Serengeti Park in Germany, allow endangered species like this thrive in peace under human supervision. But in 2019, this zookeeper found out that a rhino’s temperament can change in an instant, and barely escaped with his life while trapped inside a car. If you were driving through a park, could you outrun a rhino? Are rhinos blind? And how powerful is that horn?

With their population hovering around 5,000, rhino attacks on humans may be infrequent, but it some cases maybe not unprovoked. From 1970 to 1992, almost 96% of the black rhino population was wiped off the face of the planet due to an increased demand for their horns on the black market.

Averaging 50 cm (20 in) long and made from keratin, the horns are made into a powder and sold as a status symbol. While this animal may be coveted by poachers, if a rhino charges at you full speed, chances are you’re the trophy now. So keep an eye on that horn, and follow these steps if you want to come back home alive.

A study of animal attacks in Chitwan National Park, in Nepal, found that between 2003 and 2013, 38% of the people killed by animals were killed by rhinos. Weighing over 1.4 tons (3,087 lbs), this mammal has enough power and mass to derail a train. So if you’re thinking of snapping a photo up close with that adorable rhino calf, beware of its protective mother lurking around.

Since their eyes are positioned so far away from each other, rhinos don’t possess binocular vision. Instead, these behemoths sense movement. Stay out of their field of vision by hiding behind trees or rocks, and you might remain undetected. While it’s not a natural predator, if a rhino senses a threat, it won’t back down until that threat has been removed. Remain out of sight, and the rhino could lose interest.

With their keen sense of smell, rhinos don’t need eyes to detect your position. Move in the direction of the wind, where a rhino has less of a chance of noticing your scent. If the rhino approaches too close, toss an item of yours in the their direction. Following your scent could distract the rhino long enough for you to escape.

Step 4: Use obstacles to escape.

Reaching speeds up to 55 km/h (34 mph), this heavily armored mammal won’t stop charging until you’re no longer a threat. Climb a tree if you need to, but unless the roots are sturdy, they’ll trample it to the ground. With its ability to change direction quickly, you won’t outrun this beast. But if you dart behind trees, bushes, or rocks you might break the charge or disorientate the rhino enough to end the chase.

If the rhino starts snorting loudly, it’s preparing to charge. And if the rhino bows its head, it’s preparing to use its horn. With the sheer force behind this 1.5 m (5 ft) tall animal, a rhino can can build enough momentum to put its horn right through you. And if all else fails, as the rhino closes the gap between you both, dive to the ground and with your feet toward the rhino. This maneuver will keep you close enough to the ground to avoid being gored by that horn.

Time it right, and maybe you’ll be able to roll over again to avoid being crushed. One study reported the fatality rate of rhino attacks is almost 33 percent. Even if you survive this encounter, rhino attacks can leave you with internal injuries, so keep your organs and your head covered.

While this situation is highly avoidable, if you’re in a stand-off with this herbivore, follow these steps and you might live to have another story to tell. You may have out maneuvered that rhino, but your tour group has lost control and are running your way.How are you going to survive this human stampede? Cover your head and learn right here on the next How to Survive.