It can swallow entire gazelles, turtles, and even lions. This is the Nile crocodile, the most dangerous crocodile in the world. It normally preys on after animals found in Africa, but now, it’s coming for you.

How easy would it be for this crocodile to swallow you? What secrets lie in the crocodile’s stomach? And how would its heart help digest you?

If you think something like this is impossible, think again. Crocodile attacks are more common than shark attacks. And these attacks are responsible for nearly 1,000 fatalities a year.

So what would happen if you were one of these 1,000 attacks? Would you be able to survive?”

First, let’s get to know a little bit more about this creature who’s coming after you. The Nile crocodile is typically found in Africa, but has also been seen in Florida as well.

These crocodiles are incredibly aggressive, and are responsible for over 300 attacks on people every year. What might make it so aggressive is its size.

The Nile Crocodile can grow up 6 meters (20 ft) long and weigh up to 550 kg (1212 lbs). All this combined makes it the most dangerous crocodile on Earth.

And now, it’s coming to swallow you whole. You’d first get attacked by the crocodile somewhere along a river. And it’s likely this would happen between December and May, since that’s the crocodiles’ breeding season.

As you’re walking along the river, the crocodile would stalk you, waiting for the perfect opportunity to attack. You probably wouldn’t notice the croc. And even if you did, it might be hard to get away from it as the Nile croc can run up to 18 kph km/h (11mph) on land.

And as it caught up to you, it would strike at your leg with it’s massive jaw, applying 3,500 kgs (5,000 lbs) of pressure. This would break your leg, preventing you from getting away. And now the crocodile could drag you into the river, where it likes to do the rest of it’s eating.

Now that you’re in the water with the crocodile biting onto your leg, it would begin to roll you around the water. This is it attempting to disorient and drown you. And at this point, you’d be passed out.

And now that you’re not moving, the Nile croc would swallow your body whole. You would pass through the crocodile’s
esophagus, and into its stomach.

But wait, this is a lot of food. And not every animal would be able to eat something like this, so why can the crocodile?

Well, the crocodile’s stomach is unique. That’s because these creatures swallow rocks to help break up their
food. And that’s why the crocodile didn’t need to chew you.

While you’re inside the crocodile’s stomach, you’d be smushed through all these rocks. And with that, your body would be broken up into smaller chunks.

And that’s not the only thing that would help the croc digest you. Inside the crocodile’s body is a heart valve that they control with their nerves. Instead of this valve going to the crocodile’s lungs, it goes to the stomach. This allows the crocodile to produce 10x more gastric acid compared to other animals.

Over the course of a week, your body would be getting crushed up by all these rocks, and you’d be quickly dissolved by the stomach acid. Skin, bones, hair, and all. The crocodile would then poop out your remains, and go hunting for its next victim.

So the next time you’re near a swampy river, watch out for crocodiles. If you’re not careful, they can be pretty dangerous.

It’s delicious, it’s packed with protein and fat… and a driver of global climate change? That’s right, this is beef. But what if we all just stopped eating it? ...

How many times have you heard this classic tale? Some sort of apocalypse wreaks havoc on our planet, and before you know it, all the people are gone. Except for one: the...

You can do anything! Paint a masterpiece in a minute, learn every language in an hour, build a multi-billion dollar company overnight, and rule the world by... 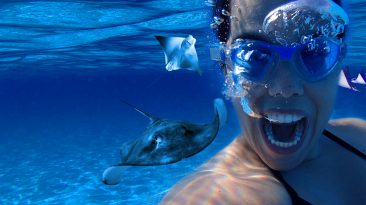 What’s the first thing you should do if you ever fall into a pool full of stingrays? They may look super cute, but don’t let their friendliness fool you...