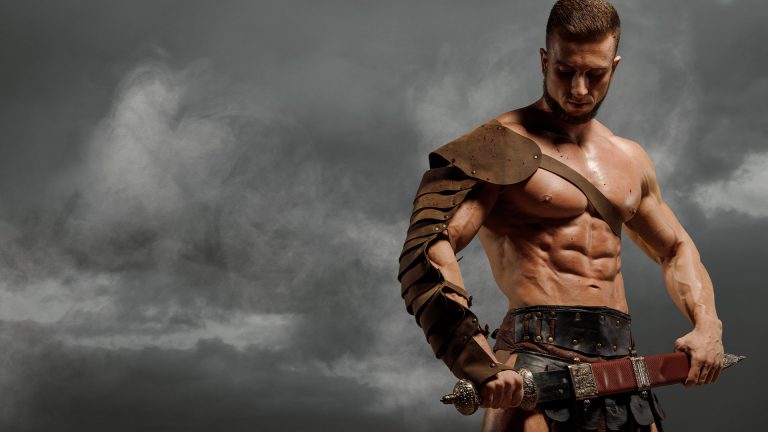 It’s year 80 of the Common Era, and the games in the Roman Coliseum are about to start. But you’re not in the audience. You’re a gladiator. You have to fight for your life against wild beasts, or other gladiators who are as eager to survive as you are. And 50,000 bloodthirsty people will watch, and decide if you live or die. Has your time come, my friend? Well…

The word gladiator comes from the Latin gladius, and means “swordsman.” The first gladiatorial games took place in 264 BCE , during a private funeral. But due to its success, Roman politicians started sponsoring these games to raise their popularity.

Prisoners from territories conquered by the Roman army were forced to fight each other, and wild animals, for the audience’s entertainment. But the fame some gladiators won enticed free people to become gladiators too. And though most gladiators were men, there were some female gladiators.

More than 300 years after the first combat, the Coliseum opened its doors to these incredible combats. This sport lasted for four centuries more. On average, 5,000 gladiators died in this arena every year. You’d better take notes if you don’t want to be one of them.

How would you learn to fight? Would you be a gladiator by choice? Could you escape from being a gladiator?

A new study of gladiators’ bones, conducted by Austrian and Swiss universities, found that the gladiators’ diet was mainly beans, barley, and wheat. So, if you want to survive, you’ll have to give up eating meat. Pass the beans, please!

Step 2: Get that workout done

At state and private schools, gladiators trained and worked out. They learned to fight like Roman soldiers. Many gladiators were deserters or defeated soldiers, and others were criminals. But around 1 CE, some freemen became gladiators by choice, like Marcus Attilius. His first rookie battle was against Hilarus, a famous, experienced gladiator.

You might think that Marcus Attilius didn’t have a chance, but he was well prepared, and won the battle. So, get those workouts done if you want to leave the arena on your feet.

In addition to being a skilled fighter, it will help if you’re well connected socially. The famous gladiator Spiculus, for example, was very close to Emperor Nero. The Emperor admired Spiculus so much that he gave Spiculus palaces, slaves, and riches.

Some gladiators were the celebrities of their time. They were admired, as fighters, sex symbols, and athletes. Some women wore pieces of jewelry dipped in gladiator blood. Their sweat was considered to be an aphrodisiac. Portraits of famous gladiators hung in public places. If a gladiator provided a good spectacle, people would love them. That could be useful, considering that if a gladiator was seriously wounded, or surrendered in battle, the audience decided his fate. So, put on a great show, and conquer people’s hearts

All that advice can be useful. But most gladiators didn’t live more than six months after their first fight. And who wants to spend all their life being forced to fight to death? You may have a better chance of surviving if you fight for your freedom, as the most famous gladiator of all time did.

Spartacus used to be a Roman soldier, but he deserted, was captured, and then sold as a gladiator. He organized 73 other rebels and escaped. Large numbers of escaped slaves joined them, and formed a rebel army of more than 100,000 men.

They defeated the Roman army in many battles, and used techniques known today as guerrilla warfare. Finally, in 71 BCE, Spartacus died fighting the Roman Army after two years on the run.

It’s true. There was not much chance of surviving as Roman gladiator, even by escaping. But if you stay healthy, skilled, and the audience loves you, you might live a bit longer. But do you know another age that was tough to survive? The Jurassic Period. Could you slay this handsome Tyrannosaurus rex? Find out now, on How to Survive.

What If Earthquakes Lasted a Year?

What If There Were Life After Death?

What If You Drained the World’s Largest Atoll?