Millions of years ago, the megalodon shark was one of the scariest creatures to ever lurk in our seas. And even before that, the mosasaurs reigned supreme, terrorizing every ocean creature in sight.

Both these creatures were the apex predators in their separate eras. But what would happen if they had lived during the same time and fought? How would this battle play out? Which creature would have had the most advantages? And who would win?

The megalodon begins by hunting for its prey. Since it never had any foes, it will be the initial aggressor in this battle. The megalodon’s hunting style relies on sneaking up beneath its prey and quickly attacking.

The shark spots the mosasaur near the top of the water, since that’s where it mostly hunts its prey. The mosasaur, as a reptile, also comes up for air every hour. The megalodon approaches the mosasaur, but as it begins to open its mouth, the mosasaur is able to dodge it.

This is because, unlike the megalodon, the mosasaur has defensive traits. Although it was the apex predator in its time, mosasaurs would also hunt each other. This means the mosasaur knows how to fight.

As the mosasaur stays in hiding, it waits for the megalodon to get close enough. Finally, it strikes.

The megalodon opens its mouth and quickly chomps down on the mosasaur. And oh! The mosasaur is down for the count. 1.2.3. And the New Champion of the Seas is the megalodon!

Unfortunately, the megaladon won’t be able to comment for its post-fight interview. That’s because this win wasn’t without consequences. The megalodon took quite a beating, more than it ever experienced before. Depending on how bad the bite is, the shark may bleed out. But if it manages to survive, it will continue on, being the one true apex predator of the ocean.

Now that the megalodon shark has won this battle, I wonder how it would fare against humans? 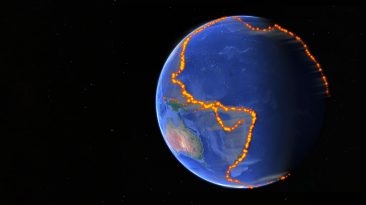 What If You Wore 100 Layers of Makeup?

What If You Cut the Moon in Half?

What If You Drank Only Water for the Rest of Your Life?

What If You Survived the End of the Solar System?