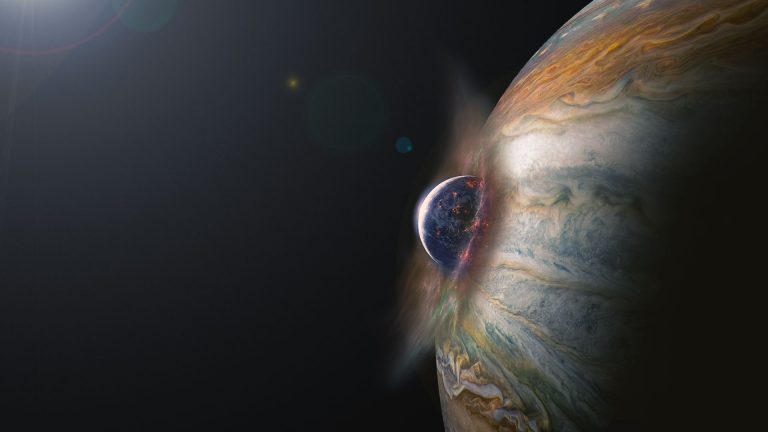 Scroll to the bottom to watch our video.

The Earth has been hurtling towards Jupiter for the past 242 days, and now it’s about to make impact. Now we’re so close to the giant planet that it’s the only thing that fills our sky.

Ground temperatures on Earth are rising uncontrollably, our atmosphere is igniting into flames, and the scientific community is scrambling to provide answers. What will happen when the two planets collide?

Is there any chance that we could pass right through the gas planet? And how would this collision transform Jupiter forever?

One way that scientists could find answers would be by looking into the past, because this wouldn’t be the first time that Jupiter has collided with another planet. Nearly 4.5 billion years ago, Jupiter was involved in a violent collision with a planet ten times the mass of the Earth.

In that case, the collision completely transformed Jupiter’s core. But what happened to the other planet? And what can that tell us about our own planet’s chances of surviving a crash against the gas giant?

To get some answers, let’s travel back to 4.5 billion years ago, when Jupiter was just a young planet trying to find its place in the Universe. Back then, Jupiter’s gravitational pull became 30 times more powerful in just a fraction of a million years.

This destabilized the orbits of nearby infant planets, and caused some of them to crash into Jupiter. It’s believed that one such planet was 10 times the mass of the Earth, and it was mainly a silicate ice core.

This planet hit Jupiter with an impact speed of 46 km/s (29 mi/s). Jupiter only lost a small amount of mass from the collision, but its original core was completely changed.
Before the impact, Jupiter had a dense central core of heavy elements, and the rest of the planet was made up of hydrogen and helium.

After the impact, the infant planet’s silicate ice core merged with Jupiter’s, causing Jupiter’s core to become diluted. The heavy elements spread out and mixed with the outer layers of Jupiter. While the collision was a defining moment for Jupiter, it meant the end of the road for the other planet.

So what are the odds that Earth’s fate would be any different? Let’s find out.

The Earth orbits around the Sun at an average velocity of 29.78 km/s (18.5 mi/s). At this speed, if the Earth were to just leave its orbit around the Sun and head straight for Jupiter, it would take about 242 days to get there.

Throughout our journey, Jupiter would shine like a bright star, growing bigger day by day, hour by hour. By day 6, Jupiter would appear as bright as our moon. Soon we would start to notice our daylight becoming dimmer. We’ll only get about 50 percent of our normal sunlight when we reach Mars’ orbit.

Luckily for us, Earth’s atmosphere would act as a buffer, so we wouldn’t experience the cold right away. But that will only last a while, so you’ll need to invest in some heavy-duty winter gear.

To put it in perspective, Mars has a surface temperature of -63°C (-145°F), so that’s basically what we’d have to look forward to. Once we speed through Mars’s orbit we’ll pass through the asteroid belt.

We’ll get to see beautiful meteorite showers lighting up the sky, but we’ll also be at risk of colliding with some of the meteors, so let’s keep moving. After 242 days of traveling through our Solar System, we would finally reach our destination: Jupiter.

As the Earth is pulled into Jupiter, our planet’s velocity could increase until it reaches 60 km/s (37 mi/s). That’s 250 times faster than an airplane flies, so you’ll want to hold on tight.

Oh, and did we mention that Jupiter has 79 confirmed moons orbiting it at all times? So there’s a serious risk that we could collide with any of them as the Earth is pulled in closer.

And if we do happen to avoid all those moons, things would only get worse anyway. As we crash into Jupiter, both planets’ atmospheres will be compressed, rapidly increasing the temperature, and essentially setting the air on fire.

But at least we won’t have to worry about colliding with Jupiter’s core, because we’ll never make it there. Our planet is too small and would burn up in the atmosphere before that ever happens. This would have a huge impact on Jupiter, as the Earth’s remains would completely mix into its atmosphere.

So if you ever notice our planet going off course and heading towards Jupiter, you might want to jump off along the way. Maybe right as we pass over Mars. And if you want any pointers on how to make the red planet your new home, check out our new show, “How To Survive.”

What If the Earth Stopped Spinning for 5 Seconds?

What If Starbucks Dumped Its Waste in the Amazon?