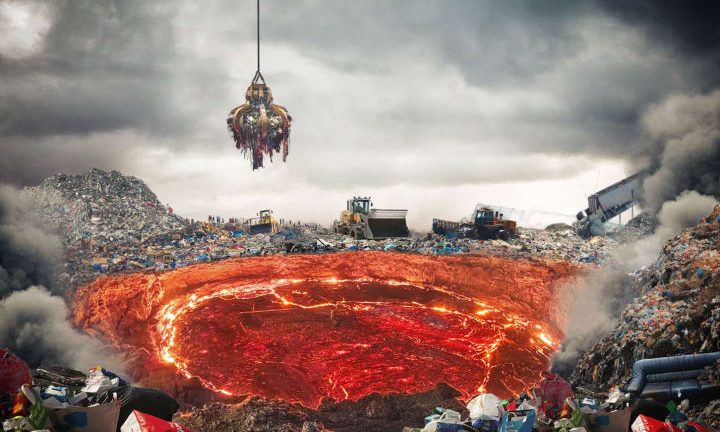 Scroll to the bottom to watch our video.

We love our convenience — single-use plastic utensils, paper plates, disposable cups, plastic wrap, wrapping paper for presents, myriad types of plastic bags, etc. If there’s a way to create something to throw out after use, we’ll find it and run with it.

As a result, the world is literally covered in litter, as evidenced by trash mountains all over the world. An estimated 37% of the world’s waste is buried in a landfill; 31% of waste is just openly dumped without any kind of covering or maintenance, while 19% is recovered through recycling or composting and 11% is just flat-out burned. Countries with generally lower income are more likely to rely on open dumping (93%), as well as the Middle East, North and Sub-Saharan Africa and South Asia. Countries and regions where people have more money for infrastructure and maintenance systems can divert trash through recycling, reuse and composting projects, with 36% of waste diverted to recycling and 22% to incineration.

Here’s a list of options, all of which would make Oscar the Grouch a little depressed. Hey, it ain’t easy being green.

1. What if we shot all our trash into the Sun? 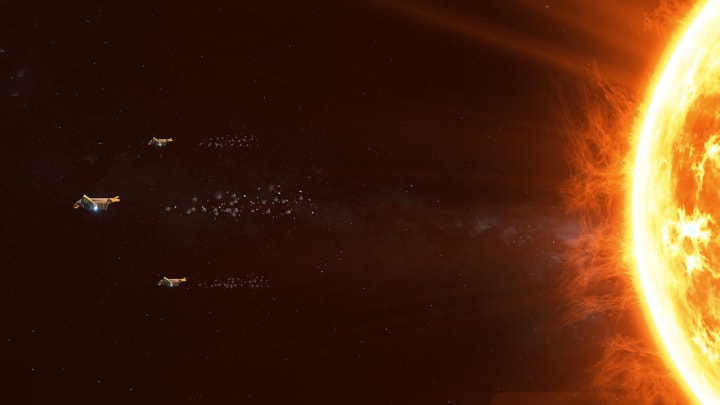 We make tons upon tons of trash every year: We’ve made 8.3 billion metric tons of plastic since it was first mass-produced 60 years ago. We also produce, globally, more than 3 million metric tons of solid waste daily, which the World Bank expects will nearly double by 2025, up to 5,443,108 metric tons DAILY.

So let’s shoot it into the Sun, that massive burning ball of gas that helps keep us Earthlings alive and warm and in the light. The biggest problem here is cost: Launching an Ariane V rocket, with a payload capacity of 7,000 kilograms (15,432 pounds), costs $200 million. It would take 168 million rockets to rid the Earth of plastics alone, for a grand total of $33 quadrillion. Who’s going to pay that trash fee?

Let’s also consider that rocket launches sometimes, sadly, fail. If a rocket with a garbage payload were to explode? Best case scenario, some of the trash would be gone but there’d be a huge mess to clean up. Worst case scenario? There would now be a long and costly decontamination process to clean up the explosion of toxic waste meant for the Sun but now sprayed all over the launch site and for several miles in every direction.

Ok, let’s consider a broader and closer option: The vast nothingness of space itself. We’re still struggling with the $33 quadrillion problem of launching material into space at the rate we’d need to clear Earth’s trash.

But relying on space travel and rocket launches also poses the problem of creating more waste, in terms of pollution from launches. We’re already dealing with climate change issues; adding exhaust fumes from a regular stream of rocket launches won’t do anything to help carbon levels.

There’s also the question of where we’d put the trash in space. A NASA scientist posited, in 1978, that if the world turned to space as a dumpster, the accumulation of debris over time could eventually interfere with our ability to launch, use and rely on satellites. It could also create a kind of traffic jam, prohibiting space exploration for fear of running into garbage on the way to the Moon, Mars or anything beyond low Earth orbit.

Plus, we’re already facing a trash problem in space — and it’s one we humans created thanks to space flight. From rocket bodies and now-defunct satellites to personal items, like gloves or cameras, astronauts have left things behind since humans have been going into space. Every launch seems to leave something behind, and we don’t really know how this affects space, space travel or even Earth’s atmosphere. Odds are pretty good it’s not a beneficial situation.

3. What if we turned plastic trash into fuel? 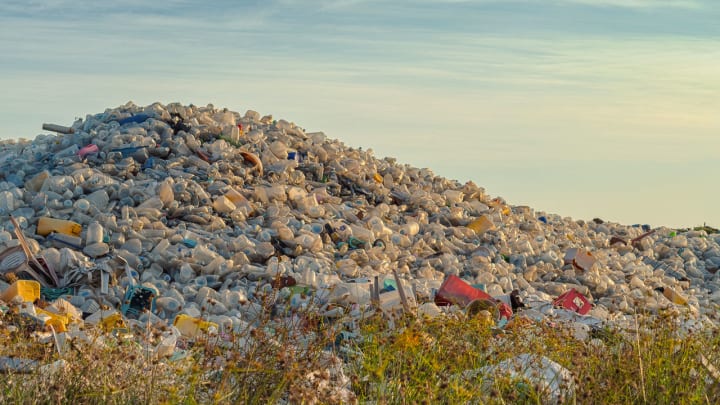 Plastics are a huge environmental crisis: They can be found in 60% of all seabirds and nearly 100% of all sea turtles. If that weren’t bad enough, even properly disposed of plastics can take nearly 450 years to biodegrade. No one has time for that — and we’re making more of it all the time.

Some scientists, looking at this data, are seriously working to find ways to turn plastics into fuel. A 2018 study looked at cold plasma pyrolysis being used on plastic bags along with milk and bleach bottles. The study found that using cold plasma pyrolysis can provide up to 55 times more ethylene from high-density polyethylene when compared to conventional pyrolysis. Researchers at Swansea University in Wales have discovered a way to convert plastic waste into hydrogen fuel. If this can be used on a large scale, it could help provide hydrogen fuel for more environmentally-friendly vehicles.

And researchers at Washington State University are looking to build on effective ways to eliminate biomass — leftover products from agriculture like stubby corn leaves and stalks and pulp from logging — and utilize a similar process of breaking down carbon bonds to create fuel.

4. What about the Bermuda Triangle? 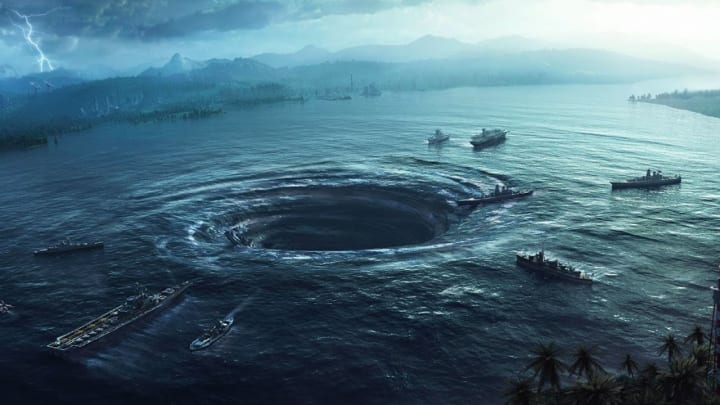 We don’t hear much about it anymore — WHY NOT?!?! — but the mythical, mystical Bermuda Triangle might be a great solution. After all, if it’s powerful enough to disappear planes and people and ships, why not just send our mountains of trash there?

Essentially, this solution entails dumping literal tons of garbage into the ocean. So long, sealife! We’re already sending 14 billion tons of trash into the ocean every year. If the mysterious forces that allegedly took Amelia Erhart aren’t still in play, we’ve added trash into the Earth’s water supply, on top of the 5.25 trillion pieces of plastic floating in the water, of which 269,0000 tons are still bobbing along on the surface.

There’s also the question of how we’d get the trash there — remember, there’d have to be a pilot or ship’s captain navigating the trash vessel into the 1.3 million square kilometer (500,000 square mile) area, stretching from Florida to Puerto Rico and over to Bermuda. How do you convince the person to do that, explaining that the goal is to make trash disappear while they come back safe and sound? How would that work? Or would they need to understand they might not make it back — at that point, do the powers that be look for volunteers? Possibly look at commuting a prison sentence for someone with zero chance of otherwise getting freed and offer them this deal?

5. Could we just use volcanoes as incinerators? 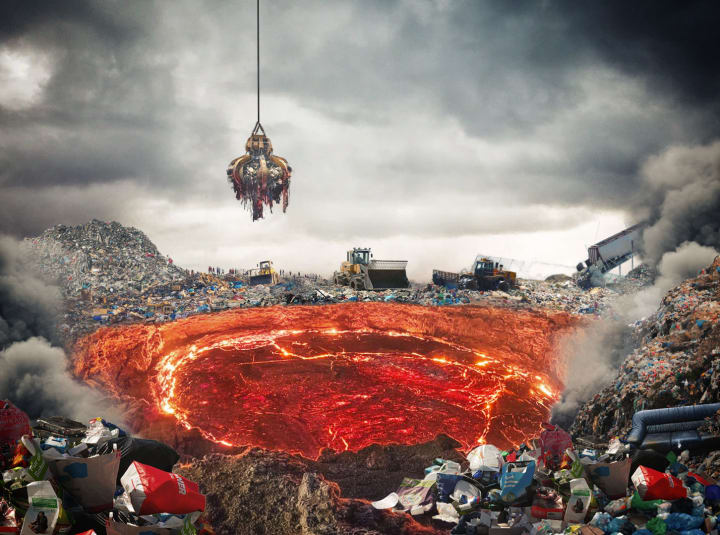 Here’s a solution! We can fly, or bulldoze, trash into a volcano, and once it erupts, BOOM, bye bye trash! Done!

Except, not so much. There would need to be a predictable and steady supply of volcanoes about to burst in order to make this a long-term solution. Of the 1,500 potentially active volcanoes around the world, most aren’t close enough to people to make this a reasonable option, or at least a cost-effective one. Plus, this has been tried — a group of Ethiopian researchers, in 2002, threw a small, 30 kilogram (66 pound) bag of trash into an active volcano, setting off a chain reaction of exploding pressurized and acidic steam. Sending tons of trash into volcanoes, at once or over time, would create chaos.

Plus, the lake of lava near the surface, producing all that steam and ash and soot and those nifty burbles of fire that indicate it’s about to erupt, are not all that deep. Toss in something without too much weight or density and it’s likely to come flying right back out, possibly on fire, and now you’ve got that to deal with.

Then there’s the air pollution and, if we’re talking about tossing nuclear or radioactive waste into volcanoes, possibly very damaging and dangerous fallout that can get up into the atmosphere and do even more damage to the environment.

Yes, we admit these are some pretty extreme measures to take (or imagine taking) for keeping garbage out of landfills. Here’s the thing, though: despite ever-developing and experimental efforts on the sustainable garbage processing front that include privately built smart cities sucking waste through complex networks of underground pipes linked to processing facilities to be recycled or converted into energy, a 2018 World Bank report still estimates the amount of junk we need to get rid of across the planet will increase by 70% as we approach 2050. Currently, upwards of 40% of global waste isn’t being managed properly, which then leads to us presenting ideas like hurtling it all towards a giant fireball in the sky with our fingers crossed. Everyone already knows what needs to be done, and luck has nothing to do with it.

What If Our Oceans Froze?