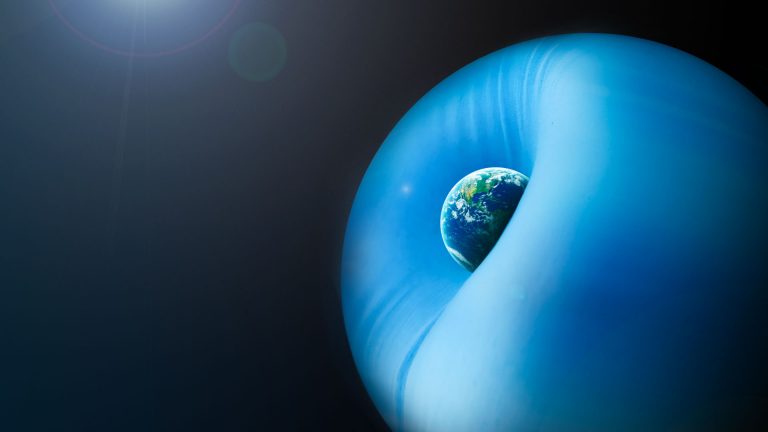 It’s been 30 days since Uranus first appeared in the sky. At first, it looked like our Moon had found itself a stellar partner. But then, we understood something much, much bigger was headed our way.

What caused Uranus to become so unstable? How could this epic collision change the ice giant? And what’s with this horrific stink? Ugh.

Let’s roll back 30 days, when things were still normal. Uranus lived a quiet life on the outskirts of our Solar System, about 3 billion kilometers (1.9 billion miles) away from us. And then suddenly, it began to move closer.

Astronomers would be the first to push the panic button. By their calculations, it would take Uranus 13 years to reach the collision point. We’d be short on time, but at least we’d have a slight chance to evacuate the Earth. But the cold blue giant had other plans in mind.

This would be no standard planetary drill. Planets don’t just take off from their orbits for no reason at all. But somehow, Uranus did.

Now it would be hurtling through the Solar System, ramping up to a speed of around 1,000 kilometers per second (600 mi/s). Because of this unexpectedly fast speed, we’d only have about 30 days left on this planet.

Uranus would shine like a bright blue star in the sky, and every day it would appear bigger and brighter. Our sky would look gorgeous. Not only because of the ice giant shining down on us, but also thanks to many shooting stars. Only those wouldn’t be stars at all.

To get to the Earth’s orbit, Uranus would have to pass an asteroid belt between Jupiter and Mars. This would disrupt the stable orbits of many asteroids, and throw some of them our way.

These asteroids can get as big as 240 km (150 mi) in diameter. That’s a few times larger than the one responsible for wiping dinosaurs off the face of the Earth about 65 million years ago.

We’d have nowhere to go. We’d just be left here, watching the end of times unfold in front of our eyes. Might as well enjoy the view.

By the time the first asteroids appeared as shooting stars, Uranus would look about the same size as the Moon. But it would be growing rapidly as it moved ever closer. While you’d be here, awaiting humanity’s doom, Uranus would start shaking things up.

Because Uranus is about 15 times more massive than the Earth, its gravitational pull would start massively affecting our planet. Volcanoes would begin erupting uncontrollably, and tremendous earthquakes would get in on the act, destroying Earth from the inside.

And the stink. You’d drop unconscious from even one whiff of it. Because, well, (khm) Uranus smells like farts. The ice giant’s upper atmosphere is mostly composed of hydrogen sulfide. It’s the same stuff that makes rotten eggs reek so bad. Imagine an entire planet of rotten eggs engulfing the Earth. Ugh. The thought of it makes me nauseous.

But Uranus wouldn’t come alone. It would bring all of its 27 moons along for the ride. And those moons would be hitting the Earth from all sides.

As a fart-filled finale, Uranus would compress what was left of our atmosphere, and the rapidly rising temperatures would ignite it. Just like that, our beautiful blue planet would fall in line and start circling the ice giant, eventually becoming one of its many moons.

Uranus wouldn’t get away with this assault so easily, however. Last time it collided with another planetary object, twice the size of Earth, it tipped over. Yep, Uranus is the only planet in our neighborhood that spins on its side. This impact featuring our earthly home could help tilt it back to how it once was.

But for the Earth we know, that would be it. If, by some unexplained mystery, life on Earth’s stinking leftovers emerged once again, we would see the blue of Uranus on the horizon.

Peter you probably don’t realize but it’s been a while and there have been a ton of Uranus jokes in the comments.

Is is true that Uranus will reach at the collision point with earth in 13 years?