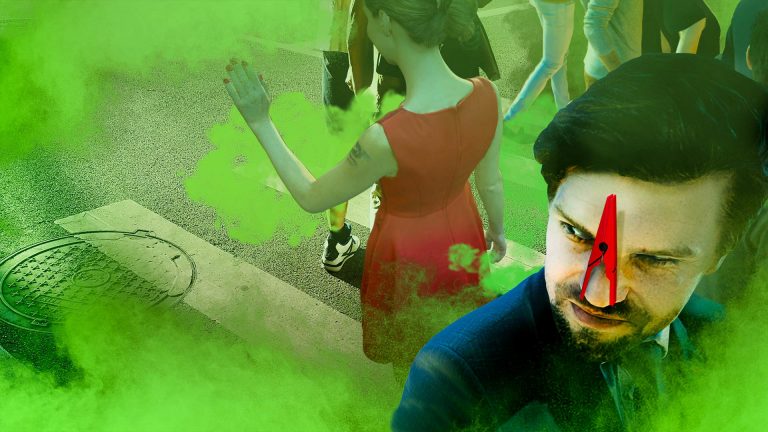 Everybody farts. And it’s no secret that they’re smelly, gross, and embaressing at times. But what if, instead of trying to hide our flatulence, we all just let it out?

What if everyone on Earth decided to fart at the exact same time? What areas would be affected the most? What would lighting a match do? And how bad would it smell?

People fart, on average, 12 to 25 times a day. Producing a daily total of just over one liter of gas. Some people make close to 2 liters. Luckily, the majority of them don’t smell, but the rest of them definitely do. So what would happen if the world decided not to fart for a single day, and 7.8 billion people released a massive trouser trumpet at the exact same time?

But before we get to that, we should probably understand what our toots are made of. Your fart is made up of six different gases. The majority of it is nitrogen, then we have some hydrogen, carbon dioxide, and who could forget, oxygen.

But there are two other gases that aren’t as common in your everyday stinker. Depending on your diet, you might have methane in your farts. This is the chemical that makes your fart flammable. And next, there’s sulfur. This is what produces a fart’s vile smell.

All these gases being released into the air at the same time can’t be good. Can it?

If we all knew something like this was going to happen, we could prepare for it. Everyone on the planet could position themselves so they’re not smelling too many gross farts. You could hide out in a field, or on a balcony, hoping to avoid the main stink of the gas. And some people could prepare by by eating lots of dairy or beans to help them produce the loudest and smelliest fart they’ve ever had.

But what if we didn’t know this was going to happen, and suddenly everyone’s bodies let out their daily farts all in one go? Well, that’s where things could potentially get dangerous.

If you were in your bedroom and let one out, or in a park, away from other people, then you’d be perfectly fine. But if you were in a densely packed area, then things would be very different.

Imagine standing on a hot, crowded subway, where suddenly the hundreds of passengers onboard let out a giant stinker. You’d have hundreds of liters of nitrogen, hydrogen, methane, and sulfur, all crowding the subway.

It would be incredibly loud, and inhaling the smell would be enough to make you pass out if you’re not careful. And densely populated cities like New York and Hong Kong would experience a similar effect. The millions of people tightly packed into the area would all fart, and produce millions of liters of gases.

The sounds coming from everyone’s butt cheeks would make your ears ring, but being outside would definitely help to keep them from being shattered. Places like Italy and the Middle East might be especially stinky, as their typical diets can produce a smellier booty burp.

The world would become the ultimate Dutch oven. Oh god, that is so gross. Why did I even say that? Okay, let’s switch gears for a minute.

At this point in the video, you’re probably expecting everyone to die, or the world to end, but with everyone farting at the same time, that wouldn’t be the case. Sure there might be some deaths and injuries from the gases and volume of the farts, but the vast majority of people would be OK.

Eventually, the gases would dissipate, and everything would get back to normal. Not to mention a lot of them might not even stink as just 1% of our daily farts have any sulfur in them. And all the gases we let loose wouldn’t harm the planet either.

Think about it. Everyone farts multiple times a day anyway. So even though we all did it at the same time, it wouldn’t make much of a difference. We already expell these gases into the air every day. But what about all the methane our farts produce?

Well, don’t worry about that either, as 50% of farts don’t produce any methane. So lighting a match wouldn’t produce an epic fireball explosion out of nowhere. All in all, this would be a smelly, loud, and gross event, but that’s about it.