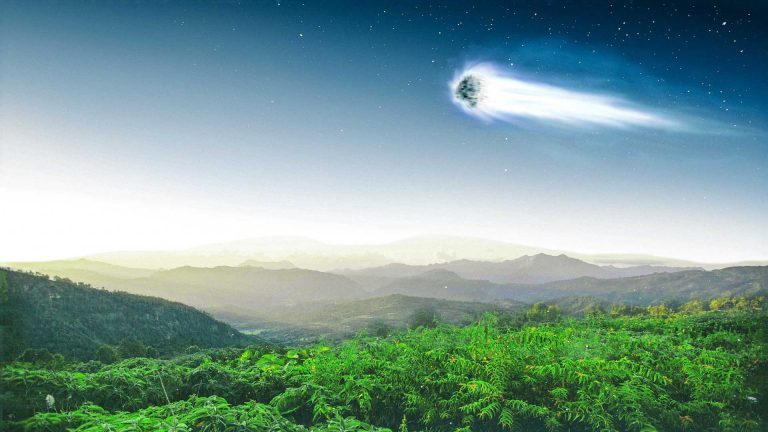 In 7.5 billion years, the Sun will expand and engulf our planet, destroying all life as we know it. Of course, a mass extinction on Earth could happen much sooner than that.

It might even be our fault. Sooner or later, humans might have to leave Earth to find a new home. But while that might sound scary, not to mention impossible, some say it’s already been done before … millions of years ago … by organisms much smaller than us, and not nearly as smart.

Imagine that millions of years ago, a comet sailed through the outer atmosphere of Earth. The comet flew high enough to avoid burning up in the atmosphere, but just low enough to pick up some extremely determined microbes.

The stowaway microbes embedded themselves deep within the pores of the speeding comet, sheltering themselves from the radiation of deep space. Eons later, the comet crashed onto a planet in another solar system. And the surviving microbes began to grow in their new home.

According to two astrophysicists at Harvard University, this might actually have happened. But if Earthly microbes did succeed in trading our planet for a new one, does that mean that we could one day do the same?

Microbes are small in size, but huge in numbers. The most recent estimates say there are roughly one trillion different microbe species living on Earth. And while we have yet to discover 99.999% of them, the microbes we do know are vital to our survival.

At least 50% of the oxygen on Earth is produced by photosynthetic microorganisms like algae and cyanobacteria. And before the evolution of plants, microbes were the only oxygen producers on Earth.

So, with that in mind, and assuming humans would continue to rely on oxygen to survive, we might actually need microbes in space to support our lives on other planets! If the “Earthly microbes hitchhiking on a comet millions of years ago” theory is correct, then there could be another planet out there with a habitat that’s similar to ours on Earth!

Unfortunately, this “alternate Earth” would be in another solar system… and humans have only traveled as far as the Moon. The best way to test this theory would be to send microbes to Mars, or other nearby “new Earth” candidates, with the hope that they’d be able to foster an atmosphere we could live in.

If the microbes we sent from Earth succeeded in creating an atmosphere like ours and laying the foundations of a food chain, we’d have a much better chance of building a new future for ourselves. Unfortunately, it’s hard to predict how microorganisms will respond to being in space. In some cases, bacteria can become less harmful, but in other cases, they can grow faster and become much more dangerous.

We don’t know how our microbes could affect any existing eco-systems on other planets. They could become an invasive species that would drive the native life on other planets to the brink of extinction.

And it’s hard to say how the microbes we sent would evolve on a new planet. Sure, we might get some plants on a new planet, but… what kinds of plants? There’s also the fear that if microbes can successfully planet-hop through space, then Earth is equally at risk of being hurt by them.

If alien microbes infected Earth, it could lead to the development of new diseases that we couldn’t cure, not to mention that the newly-introduced microbes could have other unpredictable effects. And without a cure to some unknown, untreatable alien epidemic that might suddenly appear on our planet, we might be forced to leave our home world after all!

But before you start aggressively searching for a place to buy NASA-approved space suits, you should know that we’re far from having a fully-developed theory on space-traveling microbes. After all, we’re still learning new things about the biology of our atmosphere, which makes understanding how it might’ve been hundreds of millions of years ago even more challenging!

We also don’t know just how long even the most dedicated microbes could survive. We know that tardigrades, for example, can live for decades, and they’re able to survive the harsh environment of space.
But can tardigrades or anything else live long enough to make it to an entirely different solar system? That remains to be seen. Or, maybe not. We don’t know exactly when humans might actually have to leave Earth, but what if we knew the exact time Earth was going die?

What If the Earth Stopped Spinning for 5 Seconds?