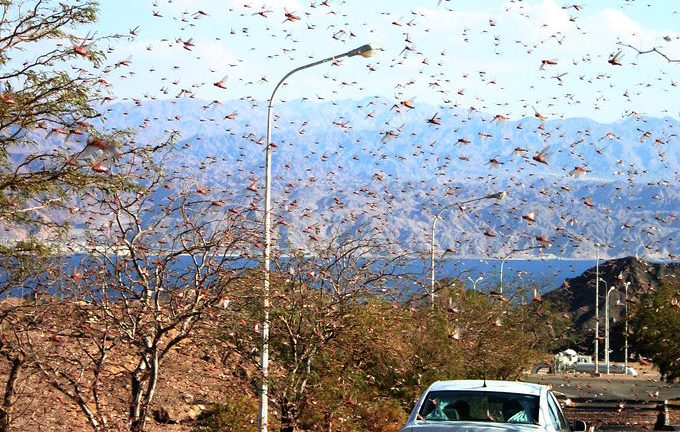 It’s about to get Old Testament here. What if the creepiest, crawliest, most catastrophic member of the Plagues of Egypt made an unexpected housecall?

And decided your city was next on the dinner menu? That’s right. A locust swarm has arrived. How much damage would it do? And is there any way to stop it?

I hope you’re not squeamish, as this might get a little gross. Imagine a massive cloud of shadows coming over the hill, covering an area of 40 by 60 km (24 by 37 mi) with darkness.

Each square kilometer of that monstrosity is packed with 150 million locusts. Ugh, I’m going to feel them crawling on me this whole video.

It’s estimated that a small swarm of locusts can eat as much food every day as 35,000 people. Big shots in the locust community, such as the desert locust, have figured out the whole strength in numbers thing.

They realized that “the more buddies you have around, the less likely you are to be eaten. What this means is those locusts are laying 1,000 eggs in every square meter of ground, allowing the newborns to join in on the feast, and moving together as a massive, hungry unit.

And it’s next stop is your hometown. The first thing to go would be the green areas.

Any gardeners in the audience can say goodbye to their plants, flowers, fruit, and vegetables. It’s all locust food now. As for everyone else, I hope you’re not hungry.

Parks would no longer be green as the locusts would consume all the leaves, flowers, and fruits. They even eat bark. Imagine taking a stroll down the barren husk that used to be Central Park.

And if your city has a lot of nice nature areas, I’ve got some bad news for you. The swarm can last for months if nothing is done to stop them. Outdoor food markets would become a thing of the past, as the swarm would begin a hostile takeover.

You wouldn’t want to leave your home, as the streets would be covered wall-to-wall with these little beasties. But what if they try to break in? You’d have to lock down your place, sealing all the cracks the swarm could get through.

And just because a swarm of locusts can’t eat up a living human being, doesn’t mean you’re out of danger. Locusts, grasshoppers, and cockroaches are common causes of allergies. When it comes to locusts, their hormones and pheromones, the scales that come off their wings and cuticle, and increased amounts of dust can cause a spike in allergies.

So, is there any chance we could prepare for a plague of locusts? Well, if a locust swarm came to a big city in the United States or Europe, it’s hard to say whether we would be prepared for it or not.

If we did catch a lucky break and were warned of the oncoming swarm, we could begin a mass spraying of chemicals and pesticides over green spaces. That would kill the locusts when they arrive.

A biological control for locusts is a fungus called Metarhizium. It acts like a nautral pesticide and kills the locusts from the inside. It’s not a sure thing though, as the fungus is specific to the insect and doesn’t have a guaranteed kill rate.

So what the heck are we supposed to do? Is there anything that can save us? Well, maybe ducks. Yeah, you heard me. Ducks.

Releasing ducks is one way that people are suggesting we curb locust swarms. Locusts are a delicious treat to waterbirds, and they will eat more than 200 locusts each day. But then we would have a huge amount of ducks running around. Oh well, they saved the city. I guess we’ll erect statues of them now.You brave, valiant ducks.

While this scenario isn’t really that plausible, experts think that as global warming continues, locust swarms will migrate to more urban areas in search of food. In 2020, locusts have been seen in urban areas of Rajasthan, India, which is extremely unusual, to say the least. They were also reported in April, which is months ahead of their usual arrival time.

We probably didn’t need another problem to show us why climate change is bad, but here it is. Locust swarms will continue, and they’ll get worse as the climate continues to heat up. The locusts will expand their range, and the increased droughts will bring them together and spark an insatiable appetite that leads to swarms.