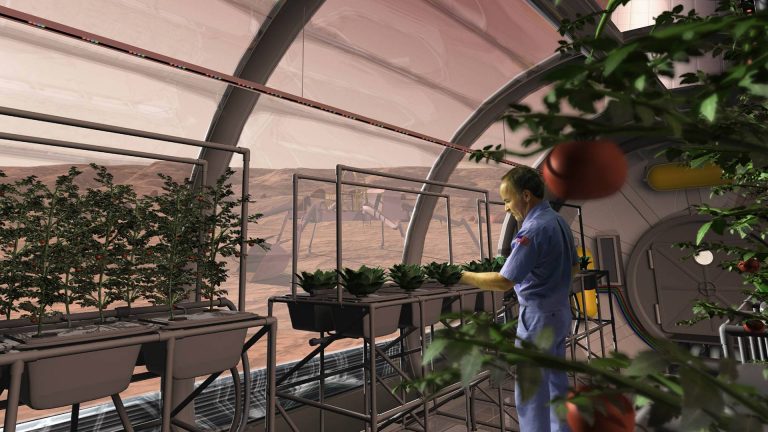 What if we took everything that sustains life on this planet, and shrunk it down to one small bubble? Earth’s biosphere stretches about 20 km (12 mi). From the deep-sea vents in the ocean into the atmosphere. This is where almost all life exists.

If we ever want to live in space, or settle Mars, we will have to recreate this extremely complex system. What would you eat? Would you have garbage? What would be the biggest threat to your health?

We’ve tried this once before, with disastrous results. In 1991, eight scientists enclosed themselves in a huge research facility called Biosphere 2. This building was completely shut off from the outside world. All the food, air, and water had to be produced and recycled within its walls.

But the experiment quickly began to fail. There was not enough food or oxygen, the pollinators died, and roaches infested this mini-Earth. But could we do it again, and this time, succeed?

The Earth’s biosphere is technically a closed system. The only thing that enters the biosphere is a continuous flow of energy from the Sun. But creating an earthlike biome is not as easy as it sounds.

Within Earth’s biosphere are biomes, communities of flora and fauna that occupy major types of habitats. You’d need a collection of biomes to create a successful, life-supporting mini world.

Like Biosphere 2, you’d be living in a 12,700 square meter (3.14 acre) facility, which would contain a rainforest, an ocean with a coral reef, mangrove wetlands, savannah grassland, and a fog desert. You would also need agricultural land, and a place where you lived and performed laboratory work.

As for your daily routine, it would be rough. Keeping yourself alive would be a lot of work. You’d spend almost 35% of your time on agriculture.

Then there’s all the maintenance, lab work, and household chores. Your diet would be mainly vegetarian. It takes at least 25% more water to produce 1 kg (2.2 lbs) of meat than 1 kg of wheat.

Because animals require a lot of resources, you’d carefully select which ones to bring into your biosphere. I suggest the African pygmy goat, the most productive domestic animal in Biosphere 2. Its milk would be a welcome break from all the vegetables you’d be eating.

The crew of Biosphere 2 survived mostly on sweet potatoes and beets. But you’d do a better job and successfully grow a hundred different crops, including papaya and rice. Even with all your agricultural work, starvation would be a real threat. Because your biome is so small, the slightest problem can ruin your food crop.

You could have unbalanced soil composition from adding waste, pollinators dying off, pests increasing, disease. Whole fields of food could be ruined, leaving you very hungry.

In the 1991 experiment, working relentless hours and facing constant hunger created rifts within the small community. To avoid this, you’d need the perfect number of people to balance the other work and food production.

Too few people, and you’d be overworked. Too many people, and there would not be enough food to go around. While crops would be a major focus of your attention, you’d still need to tend to the rest of the biomes.

Plants wouldn’t just be for eating, after all. They’d also produce oxygen. And much like the Amazon rainforest, you’d need areas that are full of plant life so you could breathe.

Too little carbon dioxide, or oxygen, and you could be in trouble. It’s tricky to balance them, and in Biosphere 2, oxygen depletion became a huge issue. Why?

They mixed too much organic matter into the soil. This caused an explosion of oxygen eating microbes, which decreased the amount of oxygen. And the carbon dioxide produced by these microbes reacted to a chemical in the biosphere’s concrete. So the plants couldn’t use the extra carbon dioxide during photosynthesis.

Luckily, we learned from that mistake. You’d make your biosphere so it wouldn’t react to carbon dioxide. So you have enough food and oxygen. That’s good. But what about waste? It has to go somewhere, and there’s no room for landfills in your mini world.

You’d have to compost all human and animal waste. And remember, this compost would increase the number of oxygen eating microbes, so you’d need to plan for that while maintaining your biosphere. Everything you use would be reusable, and it would all have to be compostable.

You’d mend your clothing, made out of cotton, silk, and wool, many times. Then you’d use it for rags, then stuffing, and finally you’d throw it on the compost heap. You’d rely on technology to circulate air, pump water, and constantly measure everything in the biosphere.

This takes power. And your only options would be solar, nuclear, or both. Earth is a vast, complex system, where every living organism, including you and me, are connected. Recreating that on any scale is a gargantuan task.

What If the Big Bang Wasn’t the Beginning of the Universe?

What If You Cut the Moon in Half?

What If Everyone Was Albino?