What If Russia Turned Into the Next North Korea? 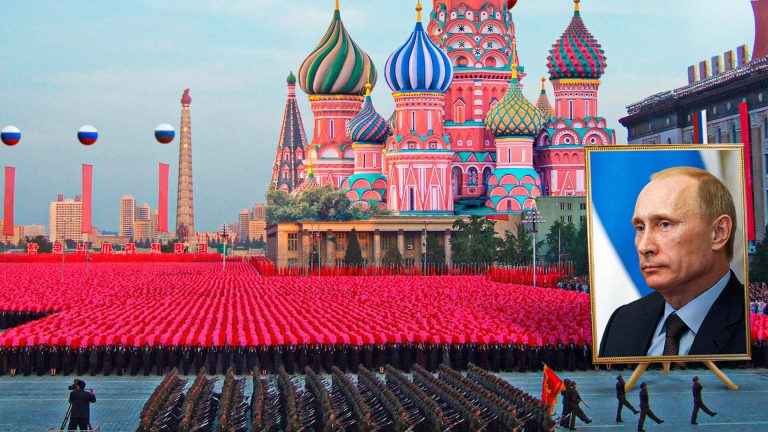 What if in a stunning move, Russia, one of the largest energy producers on Earth, decided to cut itself off from the world? This heavily armed dictatorship has declared itself free from the global economy. From now on, their motto is Russia First. So what if Russia isolated itself like North Korea? How would this bold move change Vladimir Putin’s rule? What would happen to food prices? And really, would this country look any different for its people?

North Korea is one of the most secretive and isolated countries around. But why is that? Well, sanctions and Juche, the philosophy of self-reliance, grabbed hold of North Korea and never let go. But the truth is that North Korea depends on the world for help. Countries donate millions of dollars to produce food every year to feed 10 million malnourished people.

Yeah, 40% of an entire nation goes without proper nutrition under their leader, Kim Jong Un. And don’t expect him to be voted out. Kim Jong Un is just the latest in line from the Kim dynasty of dictators who have ruled North Korea since 1948. Every person within North Korea faces intense scrutiny in an environment made to test their loyalty.

But if Russia, a country with way more resources and people, isolated itself from the world, could it become an economic powerhouse? In a country being run into the ground by a failing economy and warmongers, the Russian people surprisingly support their president, Vladimir Putin. But how far would the people be willing to go as the walls around their nation close in around them?

If Russia wanted to tighten its grip on its economic infrastructure like its ally, North Korea, it would have to crack down on every industry and business within its borders. No job, trade or product would exist without the state’s approval. Control would come straight from the top, the dictator-for-life, Vladimir Putin. But who would rule Russia after him to enforce these policies?

The next in the line could be one of his two daughters. But if sexist politicians argued against having a woman in charge, then maybe control would go to his grandson once he’s old enough. Either way, elections could end forever if the Putins held on to the presidency by just passing down the title. Like in North Korea, leadership could become a family business. And never go against the family. So what if you weren’t born into this elite class?

Right now, a small group of billionaires called the oligarchs control the Russian economy and the industries that run it. But under this new order, their private companies would become assets of the state. They would lose control over their corporations and their profits. And the foreign businesses in Russia? Gone. Companies that exported to the U.S. and Europe? Too bad.

You’re only working for Mother Russia now. Workers would get assigned jobs by the government, just like in North Korea. The job you’re given would be the job you keep until the day you die. In North Korea, sanctions and border restrictions sent prices soaring for everyday goods during the pandemic. A package of coffee went for as much as $100.

Unless it could be made or produced within Russia, the country could experience the same type of price gouging. Less competition on the shelves would mean higher prices. And with money worth less than it once was, you would have to hoard wealth to buy anything. And those without money could miss out on more than their favorite brands.

With the government now in complete control of all media, the internet would be restricted to state-approved websites. Television would be nonstop propaganda in support of the Putin family. I mean, things wouldn’t be that different, considering Putin controls all media now, but other choices are available. Without the funds to access technology or other forms of communication, you would have to see his face everywhere.

North Koreans build statues, sing songs and keep photos of Kim Jong-un in their homes. From birth, every child is taught to honor and revere the man they call The Great Successor. Russia could do the same, replacing their past heroes with Putin’s image. You couldn’t escape this face whether you were on a bus or just walking down your hallway.

Imagine seeing that everywhere. If you’re at the top of the social food chain, maybe you could take a luxury trip to forget this struggle. Not so fast. With tight sanctions and restrictions, many Russian commercial planes owned and produced by other foreign nations could be confiscated. Would anyone be allowed to leave? It’s hard to say.

Anyone who needs a visa to study abroad or work wouldn’t be approved. Anyone behind Russian borders might be stuck there for the rest of their life. Fighting back might have severe consequences. North Korea keeps forced labor camps that hold criminals and rebels. And for Kim Jong Un, rebellion could mean copying that signature haircut.

Yeah, getting this stylish hair-do could land you and everyone you love in prison. Families are even kept in jail for three generations. That means tens of thousands of people will never know freedom because of your trip to the barber. Russia has already cracked down on protesters. So imprisoning entire families over lifetimes might sound intriguing to corrupt officials and Putin.

Kim Jong Un is also famous for murdering his own uncle. Considering Putin’s bloodthirsty reputation, no one would be safe from this relentless oppression. Murder, assassination and imprisonment would be the tools of Putin and whoever inherits his throne. This regime could continue to rule Russia with an iron fist for decades to come.