Human beings have existed for 300,000 years and have managed to live in many unstable environments. We’ve survived ice ages, devastating pandemics and world wars.

But how would we fare even further back in time? What about 400 million years ago, when deadly marine life dominated our oceans and creatures on land were practically non-existent?

Let’s imagine your What If time machine happened to break down right at this moment, trapping you in the Devonian Period. What would life be like? Where would you live? How long could you last?

Stroke of luck, our time machine drops you on land. At this point in time, 85% of the Earth was comprised of ocean. Only two supercontinents existed 600 million years ago, Gondwana and Laurussia. Gondwana had a massive mountain range similar to the Himalayas, which slowly eroded, washing sediments into the ocean. These sediments provided nutrients that allowed marine life to flourish, giving rise to the Devonian Period.

Okay, enough background. Our first step for survival is to seek shelter. In the early Devonian Period, trees and plants had not evolved yet. But there was lots of moss! The land was barren, Mars-like and surrounded by water. You might need to get a little creative to build a shelter.

If humans actually evolved in this period, they would likely be naked with little material to make clothes. Or maybe we would develop a new fashion line made of moss, seashells and fish bones! Ooh la la, how Devonian chic!

Speaking of fish bones, you’d want to be very careful about fishing. Many scary sea creatures would be happy to eat you. Like Placoderms, a species of armored fish with huge sharp jaws that could easily make you bite-sized. In the early Devonian Period, Placoderms were the apex predator and would grow up to 10 meters (33 feet).

Let’s say you got lucky and actually caught a fish, without being eaten yourself in the process. How would you cook it? With no trees for fuel, you’d have to find some very dry moss and start rubbing some rocks together. Luckily, the climate was pretty warm, meaning you wouldn’t freeze at night.

But with very little kindling available, you might be better off sticking to a raw diet of mollusks and other early arthropods. You’d also have to move around a lot to keep finding these critters, so be prepared to do a lot of walking.

Hmmm, I can see you’re getting a little tired and bored existing out there. Let’s fast forward another 40 million years toward the Late Devonian Period.

This period is also known as the Devonian extinction. But don’t worry! It could actually be a really good time for you, fearless traveller! Since by this point, almost 79% to 87% of all existing species were wiped out.

What could cause such a catastrophe? Scientists believe it was the evolution of plants. Vascular plants began dominating the environment, including trees, ferns and flowering plants. Their roots broke up the rocky ground and released nutrients and minerals in the water. These nutrients fed algae, which multiplied rapidly and produced greedy bacteria that fed on oxygen.

Many regions of the ocean became ‘anoxic zones,’ and much of the marine life died off due to the lack of oxygen. With more air in the atmosphere, some sea creatures slowly adapted and made their way to shore. So, you can breathe easier knowing there are less predators in the water, but look out for your new neighbors on land!

These land dwellers, known as lobefins, were the early ancestors of amphibians and all four-legged land vertebrates. In fact, the Devonian Period got its name from the fossils of lobefins found in Devon, England. In 2004, a lobefin fossil was found in the Canadian Arctic known as the Tiktaalik, which is considered to be the species between fish and land-dwelling tetrapods.

It had a crocodile-like head, bony fins, sharp teeth, and a flat body almost 3 meters (9 feet) long. Its fins had partial wrists allowing it to crawl on land. So, if I were you, I would quickly hide if I saw a Tiktaalik heading my way.

The other dominant species were Cartilaginous fish with skeletons covered in cartilage. These are the ancestors of sharks and rays. But you don’t have to worry about sharks. Oh no, there’s something far bigger, and scarier!

I’d keep my distance if you happen to see a Dunkleosteus swimming around. These were the deadliest predators of the Devonian age, with thick, bony plates covering their skulls and razor sharp jaws. Some would grow up to 10 meters (32 feet) in length.

Their jaws were strong enough to chomp right through another Dunkleosteus. With few fish left because of plants hogging the oxygen, these placoderms were starving and desperate enough to eat each other. So, be very careful where you bathe!

With more trees and plant life emerging in your environment, you could finally create some helpful tools, like spears, fishing hooks, and rope! You could improve your diet and maybe become a vegetarian! And you could fashion some new clothes that aren’t so irritatingly itchy! By the late Devonian, you might even be able to build yourself a treehouse in the Archaeopteris, the first tree on earth which grew up to 30 meters (90 feet) tall with a trunk 3 meters (10 feet) wide!

This may be nice for a while, but if you think the Devonian Period is easy, you might want to plan a hasty exit before the Cretaceous Period rolls around. Who knows, maybe ancient life actually found a way to escape our planet? 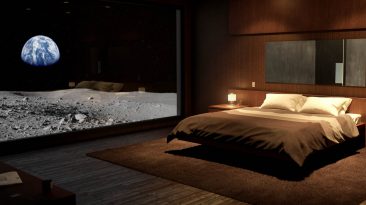 Imagine living on the Moon. You’d have the best view of Earth, enjoy bouncing around in zero gravity and living your life as an astronaut explorer. Ah...