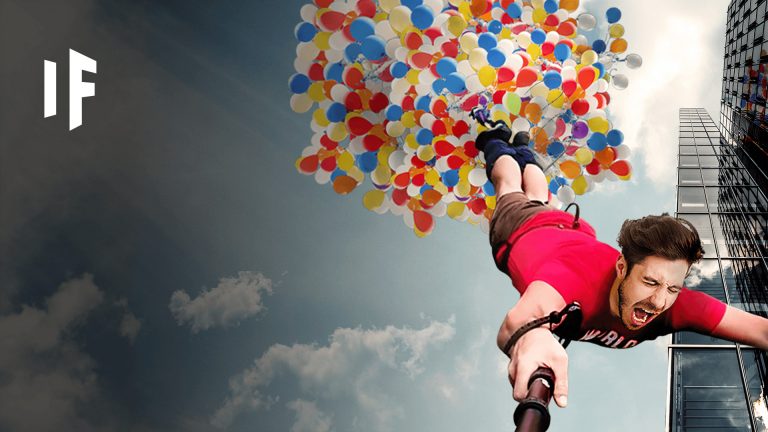 Long after the invention of airplanes, we still dream of being able to fly on our own. But without wings, our options are kind of limited.

But what about a deck chair with some helium balloons attached to it? That … might just work!

Helium is the second lightest, and the second most abundant element in the universe. Ranking just above it is hydrogen, but there’s a reason why we don’t use that for air travel anymore …

Helium is lighter than air, which is what makes some balloons float. And helium doesn’t catch fire, which makes it a safe choice for parties!

But what if you wanted to use helium for something else? Like, for a nice little weekend getaway? How many balloons would it take?

How high could you go? And how would you get back down safely?

A regular birthday party balloon, measuring about 30 cm (1 ft) in diameter, is capable of lifting about 14 grams (0.5 oz) of weight, if the balloon itself and the string tied to it aren’t too heavy. So if you weighed 50 kgs (110 lbs), you’d need about 4,000 balloons to really get floating.

The average latex balloon filled with helium normally costs somewhere between 50 cents and $1, which means that your balloon chair adventure could cost you as much as $4,000. For that price, you could also fly first class to Europe or Asia! But if you’re still committed to using helium-filled balloons to get around, you’d be better off using weather balloons.

In 1982, aspiring Air Force pilot Larry Walters had a similar idea. He and his girlfriend bought 42 2.4-meter (8 foot) balloons, along with some helium, and some strong line.

Walters filled up his balloons with helium, tied them to a deck chair, and then sat down with a beer, some sandwhiches, a CB radio, and a pellet gun. But if Larry Walters was expecting a nice little breezy picnic in the sky, he was sorely mistaken.

Walters shot upwards at a speed of 1,000 feet per minute. He suddenly found himself nearly 5 km (16,000 feet) above his home town of San Pedro, which, coincidentally was in a flight path to Los Angeles International airport.
After being spotted by two airline pilots, and realizing that he was still climbing at a remarkable rate, Larry Walters decided it was time to come back down. He shot out some of the balloons above him, and was back on the ground 90 minutes later.

Since Larry Walters’ maiden voyage by balloon, lots other people have succeeded in performing similar stunts. So while it is possible to create your own little personal aircraft with just a deck chair and some helium-filled balloons, does that make it a good idea?

We don’t recommend it. Your success in helium flying depends on having the right equipment, the right amount of balloons, and optimal weather conditions.

You wouldn’t want a gust of wind to push you into a flight path, or to blow you into some nearby power lines. Not to mention the legal trouble you’d find yourself in for dangerously operating an unauthorized aircraft.

Either way, getting your hands on enough helium for your flight might be harder than you think. That’s because there’s a serious helium shortage right now.

While helium remains the second-most abundant element in our Universe, most of the helium that comes from Earth ends up leaking into space because it’s lighter than any of the gases in our atmosphere. But the helium shortage doesn’t just put the balloon industry at risk.

We use helium to cool the magnets in the MRI machines that provide us with incredibly detailed and accurate images inside our bodies. You should also know that the fiber optic cables that bring internet and cable TV to your home are made in a pure helium atmosphere.

Helium is in our airbags, and in our hard drives, and it’s also used to clean rocket engines. So yeah, even if you can’t see it, or smell it, your life would be very different without it! Then again, any dramatic change in our planet’s atmospheric makeup is going to seriously impact our lives.