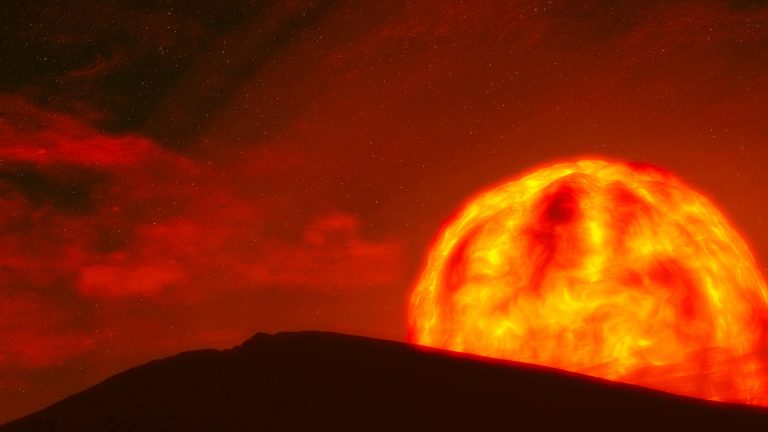 It’s the largest star that we’ve ever discovered: UY Scuti.

And if it were to replace our Sun, it would change a lot more than just the amount of sunscreen you’d have to put on. Like, how long would it take for our planet to orbit this massive star?

What would that do to our seasons? And would we even survive a single orbit?

To say that UY Scuti is huge would be an understatement. It’s one of the largest things that the human race has ever discovered.

To put it in perspective, it’s about 1,700 times larger than our Sun. If you were to fly a Boeing 777 airplane around UY Scuti, it would take over 1,200 years to make the trip. So would a star this gigantic even fit into the center of our Solar System?

Before we can answer that, we need to get to know UY Scuti a little better. Discovered by German astronomers in 1860, UY Scuti is located in the Scutum constellation, about 9,500 light-years from Earth.

It’s a pulsating star that swells and shrinks periodically, usually shining about 400,000 times brighter than our Sun. If UY Scuti took our Sun’s place at the center of our solar system, it would engulf everything as far out as the orbit of Saturn. That includes all of us here on Earth, so maybe it’s best to leave that huge star where it is.

Instead, we could just move the Earth to the orbit of UY Scuti. But we’d have to be careful how close we place our planet to this gigantic star.

To be habitable, we’d have to put our planet in orbit about 1.5 trillion km away from UY Scuti. At this distance, it would take about 10,000 years for the Earth to complete just one orbit around the celestial body. That would change our entire concept of life as we know it.

Each season would last 2,500 years. That means that entire civilizations could rise and fall without ever seeing more than one season. For most people, summer might be something that they’ve only heard about through legends.

In case a perpetual winter isn’t bad enough, don’t forget that the orbit around UY Scuti would be located right in the middle of the Milky Way, where cosmic rays and light from other stars would shine bright enough to keep our sky blue all day and night. On top of that, UY Scuti would be pulsing out extra heavy radiation about every 740 days. And things would only get worse the longer we stay there.

You see, UY Scuti is a red giant, which means it’s a lot closer to its death than our Sun is — about 40 times closer to be precise. When it does die, it’s expected to explode with the force of more than 100 supernovas. A supernova is the explosion of a star, and it’s the largest explosion that takes place in space.

So the force of 100 stars exploding would obliterate everything nearby. Even if Earth was far enough away to survive the blast, without the star, there would be no heat and no light, and life could not survive on Earth without them.

So, once again, What If has killed off the entire human race. Maybe it’s a better idea to leave the Earth where it is, and appreciate how lucky we are to orbit our Sun. Well, until it explodes, that is.

What background music you used at the start of this video?…its quite interesting I liked it…

What If Starbucks Dumped Its Waste in the Amazon?

What If You Didn’t Blink for a Week?