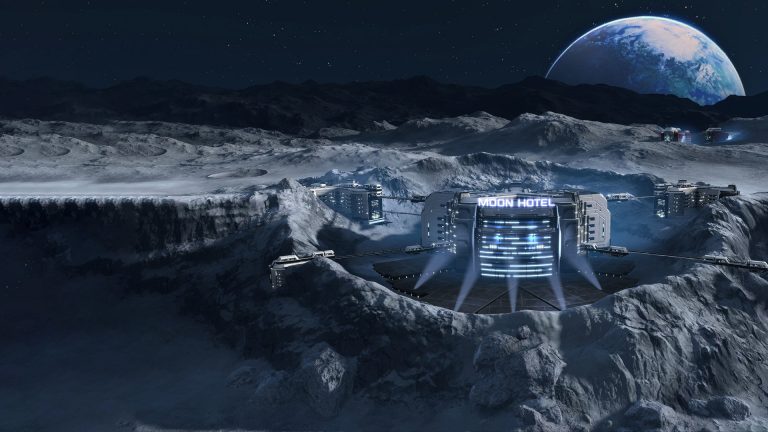 If you could, would you live on the Moon? Not as one of the courageous early settlers, but as a citizen of a fully-functioning Moon city. What would they be built out of?

How different would your everyday life be? Why would they be important?

In 2005, a design called the Shackleton Dome caused a thrill in the aerospace industry. This 40 kilometer (25 miles) in diameter and 1,524 meter (5,000 feet) high glass dome would arch over the Shackleton Crater on the Moon, housing the first Moon city.

How viable was this design? Domes are the strongest structural object and the most efficient shape to hold air pressure, so building domes to protect people from the hazards of space is a good idea.

But smaller interconnected domes, based off the Shackleton Dome, would be quicker and cheaper to build. They would be made of glass and titanium and anchored to bedrock, allowing Moon cities to thrive inside.

The cities themselves would look ultra modern. And not because of any stylistic taste, but because aluminium and silicon, the main component of glass, are the elements found in anorthite.

Anorthite is a mineral found on the Moon and would be an important local resource for construction. With so much of it in the surrounding landscape, it would be foolish not to use it liberally.

Another popular construction material used in this futuristic city would be a concrete-like geopolymer created from two additional, readily available materials. Moon dirt and your pee. Yes, your Moon house would be made from urine.

Surely there’s a stellar potty joke to be made here, but let’s just carry on. What would life be like in these futuristic cities?

Well, you wouldn’t experience normal days and nights anymore. One lunar day is 29 Earth days, which means there are two weeks of darkness and two weeks of light.

But because cities would be built around the Moon’s poles, you would only have to experience four consecutive Earth days of darkness at a time. Your diet would also change. Due to finite resources and limited space, Moon cities wouldn’t raise animals for food production, so your diet would be mainly plant-based.

You might have the option of eating fish, but any other meat would have to come frozen from Earth, so that wouldn’t be very practical. The Moon’s major industry would be mining and exporting helium-3, a renewable source of energy, and other materials.

You’d probably have a career as a scientist, engineer, or miner. As the Earth continues to use up its precious resources, the demand for helium-3 would grow.

Helium-3 is an efficient fuel source in fusion reactors and sells for roughly $40,000 U.S. dollars per ounce. Just 22700 kilograms (25 tons) of it would power the entire United States for a year. While rare on Earth, it’s found in abundance on the Moon.

This export, combined with space exploration and Moon tourism, would bring a lot of wealth to Moon cities and help repay the expensive price tag of initial settlement and construction. NASA estimates it would take $10 billion to build a settlement on the Moon, with an extra $2 billion per year in ongoing costs.

Building cities on the Moon would have to be an international combination of corporate and government partnerships. Currently, treaties prevent any one country from owning the Moon.

If a single country built a metropolis on the Moon, it could be seen as a violation of those treaties. With no single country or nation, the citizens of Moon cities would probably try and form their own self-governing nation once they became self-sufficient.

While domed Moon centers sound like science fiction, they are realistically in our distant future. Settling the Moon would open up opportunities for science, engineering, new ways of thinking, and further space exploration. It would be a necessity to create a viable space base to branch out to other parts of our Universe.

But before we could construct immense cities on the Moon, we would first have to build initial, smaller colonies, which involve their own galactic hurdles.

Hey there What If! This video is just amazing! I love it! Do make more like these!

What If You Were Born on Mars?