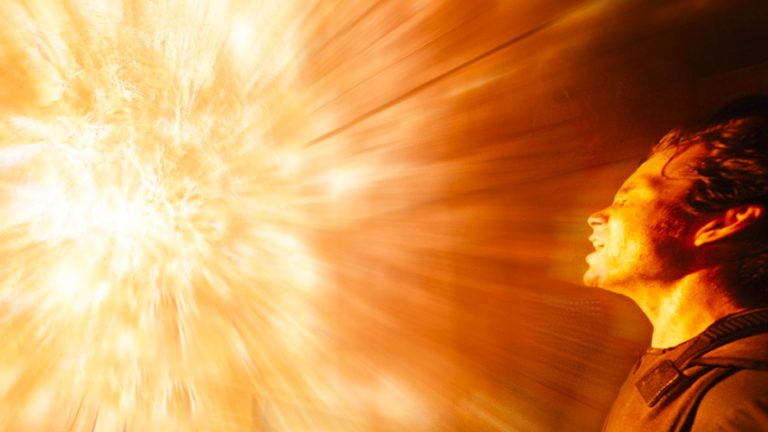 That star at the center of our Solar System, that superhot ball of plasma that gives us heat and energy, and amazing complexions… well, it’s a ticking time bomb.

After that, the Sun will expand, becoming a red giant. Then it will shrink to become a white dwarf, a dying star, cooling for the next several billion years.

Of course, we’ll all be long gone before any of that happens. But still, can you imagine what it would be like to watch the Sun blow up before your very eyes?

With a name like ‘Supernova,’ you’d think that a solar explosion would be the most magnificent fireworks show the world has ever seen. But in reality, you likely wouldn’t see anything!

The Sun is 150 million km (93 million miles) away from Earth, and it takes 8 minutes for light from the Sun to reach us. And while that may seem super far away, in supernova terms, well, we don’t stand a chance.

For Earth to be completely safe from a supernova, we’d need to be at least 50 to 100 light-years away! But the good news is that, if the Sun were to explode tomorrow, the resulting shockwave wouldn’t be strong enough to destroy the whole Earth. Only the side facing the Sun would boil away instantly.

The lucky other half would experience a rise in temperature that would be 15 times hotter than the Sun’s current surface temperature, and permanent darkness. And without the Sun’s mass keeping us in orbit, Earth would likely start floating off into in space while its remaining inhabitants desperately struggle to stay alive.

There’s a chance that our planet could lock into orbit around another star that might provide the same light and heat as our Sun. But by the time that happened, we’d all be long gone.

If we knew in advance the day that the Sun would explode, then we could buy ourselves as many as 1,000 years of time, provided we had the resources to sustain ourselves for that long. Just a few meters below the ground you walk on, the Earth is maintaining a temperature of about 17°C (62°F).

So, if we had enough time to prepare, civilization could continue to live by moving underground into a huge network of fortified bunkers. Within a week after the explosion, the surface temperature on Earth would drop to -18°C (0°F). Within a year, temperatures would plummet to about -73°C (-100°F). At this point, the oceans would begin to freeze from the top down.

Within 1,000 years, Earth’s atmosphere would freeze and collapse, leaving anything left on the surface exposed to cosmic radiation and meteor impacts. But hopefully, by that point, we’d have found ourselves a new home.

The good news is that if the Sun were to explode – and it will eventually happen – it wouldn’t happen overnight. When the Sun does die, it will be a long, slow, arduous process taking place over billions of years.

The Sun will get hotter and brighter, and it will start to expand. During this process, it will lose its outer layers to the cosmos, leading to the creation of other stars and planets in the same way that the violent burst of the Big Bang created Earth.

Who knows? Maybe new life could form. Can you imagine another Earth? A new humanoid species?

It’s hard to predict how our galaxy might look billions of years from now, and it’s especially hard to imagine our solar system without its great, golden anchor that keeps it all together. But one day, in the very, very distant future, the Sun will expand, and then it will shrink, perhaps leaving room for a new star to take its place. And if, by some miracle, humanity still exists at that point, where might we be living?

What If Jupiter and Saturn Collided?