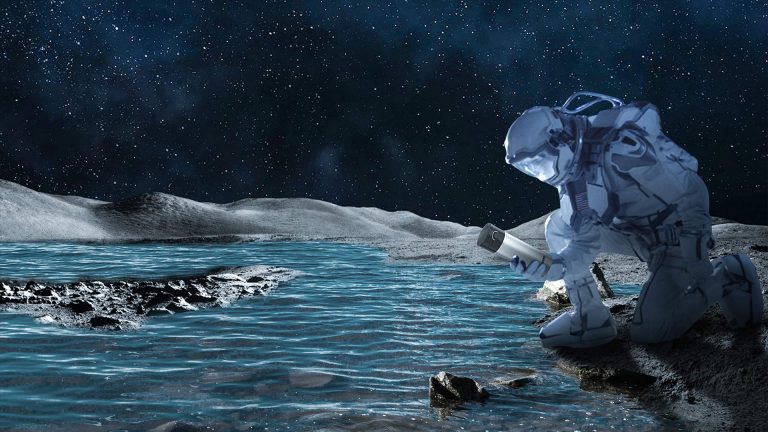 Would you drink water that was extracted from the Moon? With NASA’s recent discovery of water on the Moon’s surface, it might become a more common practice. And even though it won’t look as cool as this, it would still be a lot different than what you’re used to drinking.

How would it taste? What effects would it have on your body? And why is it so crucial for the future of space exploration?

I know that you might be thinking, “Wait, didn’t we already find water on the moon?” And you’re right, we did. But, before we only knew that it was hiding in the shadowy craters at the Moon’s poles.

Now we’ve discovered that there’s even more water distributed across the Moon’s surface. This water is very important, because it could one day form the basis of a lunar settlement and economy.

So now the question is, how do we get this water out of the Moon? And is it safe to drink?

It shouldn’t come as a big surprise that the Moon has significantly less water than the Earth. One cubic meter of soil spread across the lunar surface contains only about 0.1-0.4 L (3.5-18 fl oz) of water. That’s about the same as a 330 ml (12 fl oz) water bottle.

Even the Sahara desert has about 100 times more water than this. The good news is this moon water should be relatively easy to extract. You don’t need to drill deep into the surface for that type of water.

But the bad news is that it would be very expensive. It’s estimated that water could be mined and processed on the Moon for around $0.5 million per tonne.

That means the amount of water needed for a shower would cost $39,000. And the cost of drinking water for one person for a day would be about $2,000. As expensive as this all sounds, it would cost about 20 times more to ship water up from Earth.

So if you’re ever lucky enough to be up on a lunar base, moon water is likely what you’d be drinking. A glass of moon water would probably taste like salty hard water that we have here on Earth, because of what’s inside of it.

Moon water may contain metallic elements like mercury, magnesium, and sodium. And each of these elements could cause some serious issues for you.

First off, there’s mercury. Smaller amounts of mercury can be found in several food sources and may not affect your health, but consistently larger doses can be dangerous. Mercury poisoning is linked to cognitive issues, with symptoms closely resembling those of Alzheimer’s and dementia.

Then there’s magnesium. It’s often a prime ingredient in laxatives, which might give you some idea of where this could lead. It’s up to the kidneys to flush out the magnesium your body doesn’t need. Still, if your system is flooded with it, you could experience symptoms such as vomiting, diarrhea, and in extreme cases, cardiac arrest.

And just in case that doesn’t sound enticing enough, the moon water could also contain high sodium levels. That could lead to high blood pressure and cardiovascular issues since you’d be drinking this water every day.

But let’s be real here. If we have the technology to get ourselves to the Moon and mine water from it, then surely we can develop technology to filter that water too.

What If Earth Went Rogue?