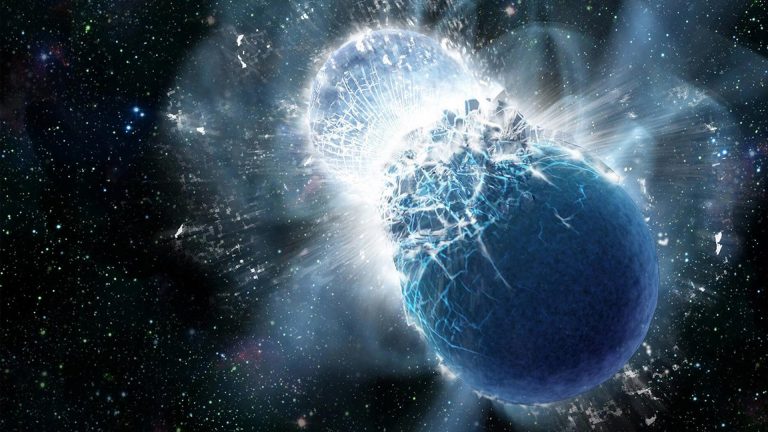 Nearly 800 million light-years away, something has been forming. Scientists aren’t exactly sure what it is but have dubbed it ‘the black neutron star.’ And now, it’s headed for Earth.

What is this strange object? How would it change our planet? And what makes this new discovery so dangerous?

What is a black neutron star, exactly? Well, scientists aren’t entirely sure just yet, but they do have some theories. It all has to do with this mass gap that’s found in space.

But what exactly happens when a star is too small to become a black hole, and too big to become a neutron star?

That’s where our new space object comes in. Scientists from the Laser Interferometer Gravitational-Wave Observatory and the European Virgo detector have discovered an object 2.6 times the mass of our Sun.

Scientists think there’s a chance this object is either the heaviest neutron star ever, or the smallest black hole. Regardless of what it might be, scientists also discovered that this mysterious space object merged with a black hole of 23 solar masses.

This happened 800 million light-years away, but the gravitational waves that it created were detected here on Earth. This could have created the most massive black hole to ever exist. But let’s say this object, which is 2.6 times the mass of our Sun didn’t merge with a black hole. Instead which if it came towards our Solar System?

Instead it came toward our Solar System? What would happen then?

As the black neutron star entered, gravitational disturbances would disrupt nearly every object within the Solar System. All the planets, comets, asteroids, and everything else in space would be thrown into chaos.

There’s a good chance that this would throw Earth out of the habitable zone. Our planet could end up wandering in the far corners of space. And with the planet being so far from the Sun, Earth’s temperature would drop significantly.

Luckily, this wouldn’t happen right away, due to all the greenhouse gases in our atmosphere. But soon enough, Earth would become a frozen wasteland. And since we’re not entirely sure what this object is, the results could be very different.

If the black neutron star were a kind of magnetar, then we would experience intense solar flares as well. A magnetar can release as much energy as our Sun has emitted in
100,000 years, in less than one second. As Earth is completely frozen, it would then be quickly heated up as the black neutron star gets closer, vaporizing nearly everything on the planet.

Not to mention, it would also cause tidal heating. The strong gravitational pull coming from this massive space object would deform Earth by heating our planet’s core. This would also give rise to massive earthquakes and volcanic eruptions.

And what if the black neutron star were just a really small black hole? Well, the results of it entering our Solar System wouldn’t be any less destructive. The black hole would slowly suck up everything in our Solar System. It would grow larger and larger, making its way toward Earth. And once it gets to us, its enormous tidal force would pull Earth apart. And there’s nothing we could do to stop it.

There’s also a chance that this black neutron star could be a regular neutron star that then becomes a black hole. This would result in Earth being quickly destroyed by all those consequences from before. And of course, we’d… all… die…

So yeah, sorry we killed you a bunch. But it just goes to show that we definitely wouldn’t want those objects coming anywhere near us. But what if, instead of a black neutron star entering our Solar System, just a spoonfull of neutron star suddenly appeared on Earth?

What If Mars Was Half Land and Half Water?

What If You Traveled Through a Black Hole?