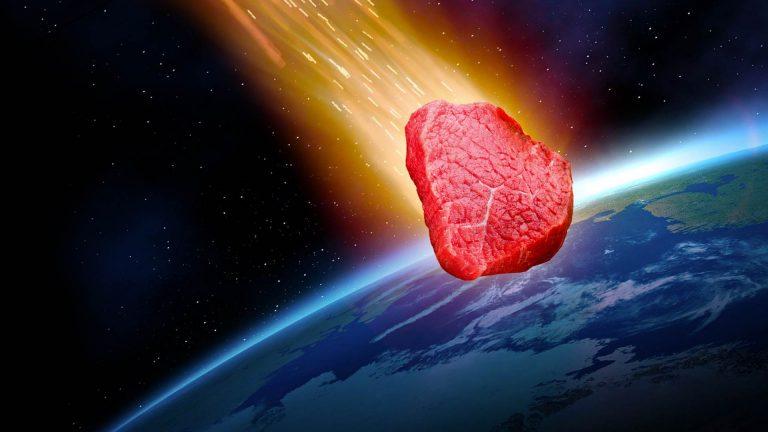 Ever had a freshly cooked steak, delivered straight from the International Space Station? Let me tell you — it’s not going to be what you might expect.

You must be having so many questions right now. Is it possible to fry a steak in space?

How long would it take to give it that perfect crust? And what side dish should you go with? Salad or mashed potatoes?

It’s not every day that a chunk of meat falls from the sky. Astronauts on the International Space Station have precautions in place to keep anything from dropping down to Earth.

But at the same time, they have to deal with spacesuit gloves that only allow about 20% of their gloveless range of motion. And sometimes, things do slip away.

Astronauts have dropped everything from a camera to a spatula. They used that thing for space shuttle repairs and not for cooking, in case you’re wondering.

So, what if, you got to go the ISS, and on your final spacewalk, a perfect cut of rib eye steak slipped through your hands, completely by accident?

Before we get to the part where you’re spacewalking with a piece of raw meat in your hands, we need to figure out how to get that meat there in the first place. The International Space Station has been continuously occupied since the end of 2000. But none of its visitors have been chefs.

Astronauts have all their food precooked here on Earth. Their meals either come ready to eat, or can be easily prepared by adding water or by heating.

Anything that hadn’t been approved six months before your launch would be prohibited. You would break about 20 food regulations by sneaking raw meat aboard the ISS, let alone by dropping that meat from orbit.

There is a reason why dropping objects from the Space Station is a no-go, and requires astronauts to report to such incidents immediately. But let me go back to it in a moment.

The ISS is orbiting 400 km (248 mi) above the Earth. What do you say, we start the experiment with some closer-to-Earth cooking? As a side note, I’ll eliminate some of the orbital effects from the story, for now. Let’s imagine that the steak you dropped would head straight down to the ground. What would make it cook?

When an item, like a steak, is plummeting to Earth from space, it moves really fast. And because of that high speed, the air in front of it can’t get out of the way fast enough. It gets compressed.

And when air is compressed, its molecules move faster, releasing kinetic energy. Things get hotter. But would it get hot enough to fry the steak?

If you’ve ever cooked steak, you’d know that this time and temperature isn’t quite enough to cook the meat through. When the steak hits the ground, it would still be far from well-done.

At 100 km (62 mi) up, your rib eye would be falling at twice the speed of sound for 90 seconds. That’s enough to add a little cooked crispness to its surface.

Unfortunately, you’d still be eating raw steak, thanks to the sub-zero temperatures of the Earth’s stratosphere.
Dropping a steak down from 250 km (155 mi) above Earth would get it that lovely seared surface. The falling meat would travel at six times the speed of sound, although it would still end up raw on the inside.

If the steak fell from even higher above the atmosphere, its front shockwave would have temperatures reaching thousands of degrees. The meat’s surface layer would start to burn off, looking more like flakes of carbon rather than a nice, medium-rare steak.

But even dropping the steak from the ISS wouldn’t give it enough time to cook through. You’d be eating a burned lump of protein that is raw red in the center.

On Earth, it actually takes some degree of talent to cook a steak like that, if you take away the burning part. Space makes for a horrible barbecue unless you prefer your steak raw with an ashy aftertaste.

In reality, if we turn the orbital forces back on, your steak wouldn’t actually make it to Earth. Your potential dinner would go into orbit first.

Red meat can be bad enough for you on Earth, but in space, it has the potential to wipe out an entire crew. If you’re still up for the experiment, at least remember to sterilize the meat before you seal it in a pouch.

And don’t take cabbage, beans or broccoli for a side dish. Those foods make astronauts fart. And that’s never a good thing in close quarters.

What If You Spent a Day on Every Planet in Our Solar System?