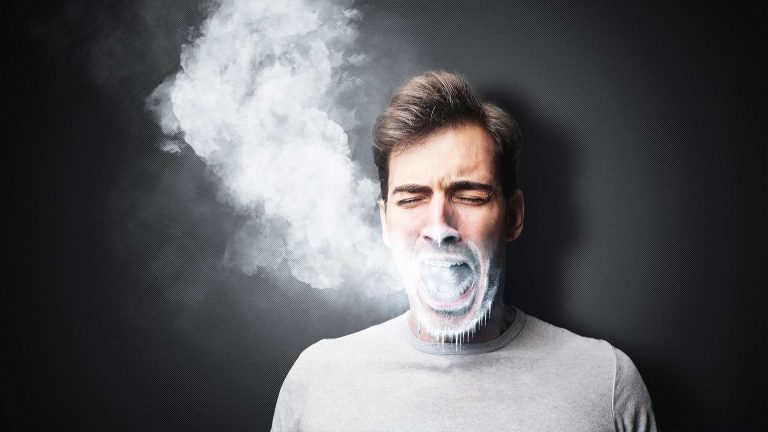 Dry ice is one of the coldest substances on Earth. Now, what would happen if you swallowed dry ice? What would it do to your skin? How much could you eat before it hurts you And how would it affect your stomach?

Dry ice is a solid form of carbon dioxide. And it’s as cold as -78°C (-109°F). And sometimes people eat this stuff. It’s an ingredient that’s occasionally used in cocktails and ice creams.

But it’s only safe in tiny doses. So now, instead of having it mixed with other foods, what would happen if you ate an entire brick of dry ice?

But first, how would you get it? Well, you could just buy it, but let’s try making some on our own. Dry ice comes from carbon dioxide gas. This gas can be as cold as -56°C. But for it to become dry ice, it needs to be even colder.

And to do that, it needs to be pressurized and cooled. When it’s released from the mold back to normal atmospheric pressure, it forms liquid CO2. And now that we have our liquid, it’s injected into a block press, which converts the liquid into a solid. And now we have our dry ice. What happens now?

Well, now that you have your brick of dry ice, before you put it in your mouth, you’d first want to touch it. If you were to just poke the dry ice with your finger, it would come back red with a slight prickling sensation to it. That wasn’t so bad.

So why don’t you try picking it up with your hands? Well, because after just a few seconds of having the dry ice in your hands, your skin cells would start to freeze and then die. If you kept it in your hands any longer, your skin would begin to turn blue and grey.

And eventually, you’d lose all sensation in your hands. And now, after learning about how damaging this can be to your body, you’re still curious enough to see what would happen if you ate this brick of dry ice. Are you serious? OK, fine.

So as soon as you ingested the dry ice, you’d immediately feel the same sensation you did on your hand, but in your mouth. Your tongue and mouth tissue would begin to sting, and feel incredibly numb. And don’t forget about your teeth. You know how bad it feels when you chew ice cream? Yeah. Imagine that, but much, much worse.

Your entire mouth would be frozen in a matter of seconds. And the longer you kept the dry ice in your mouth, it would only get worse. You’d eventually get frostbite, and eventually, you’d lose feeling in your mouth forever. But we’re not even close to being finished with the dry ice yet. You’d still need to swallow it.

As the dry ice went down your esophagus, you’d feel a little tingling there, and then it would travel down to your stomach. As it’s in your stomach, the dry ice would heat up and form gaseous carbon dioxide.

This is because, as dry ice heats up, it doesn’t become a liquid but rather a gas. Hence the name, dry ice.

And with this gas in your stomach, you’d start to feel bloated and then a sharp pain. And don’t forget about the frostbite on your stomach lining. Luckily, you could burp some of this gas out of you, relieving some of the pressure you’d be feeling.

But if you continued to eat dry ice, the pressure from the gas would continue to build. Your stomach would expand and get harder.

As the pressure continued, your stomach would rupture. At this point, you’d experience severe pain and vomiting. If you didn’t get to the hospital immediately, you’d die. So please don’t try this at home.

Let’s just keep dry ice to cool party tricks and something you’d occasionally see in your ice cream. Dry ice is definitely something you don’t want to eat. But what about something like gallium?