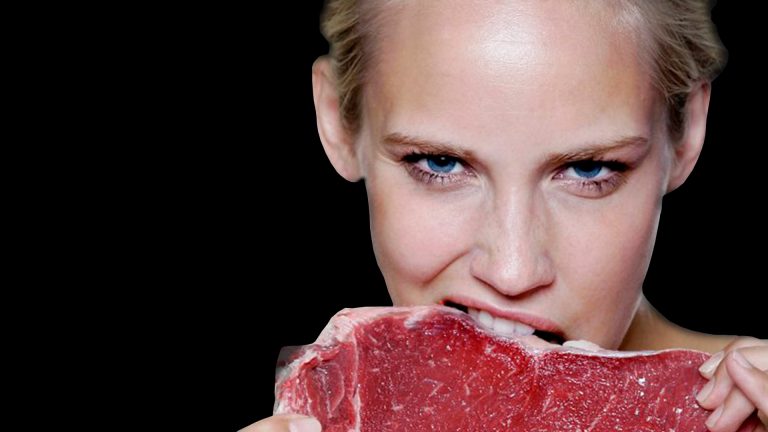 Have you ever heard of the raw meat diet? That’s right, a diet that consists of eating raw meat all day, every day. Most of us have been taught to avoid raw meat like it’s the plague, but is it really that bad for you? These people seem to be doing all right, I guess. What would be the best way to eat raw meat? How would it affect your body? And what are the benefits of this diet?

People on the raw meat diet say that they eat it for health reasons because it’s more nutritious. After all, some studies suggest that the process of cooking meat may reduce the content of certain vitamins and minerals. Other raw meat enthusiasts report having more energy and a boost in sex drive. But none of this is supported by overwhelming evidence. And even if it were, would the good effects outweigh all the bad ones?

Before we get into the effects that an all raw meat diet would have on your body, let’s look at how you would eat it in the first place. You would have to cut up the raw meat into small bite-sized pieces. Human teeth struggle to break down raw meat. They’re almost useless.

We don’t have the sharp canine teeth to chop and slice through raw meat. Our teeth are meant for grinding food. If you were to bite a piece of raw game, you would struggle to chew it. It would be like gum, and you’d just be chewing forever. And it doesn’t get any better once you swallow it, because eating raw meat can do long-term damage to your body. I don’t know about you, but I could sure go for some cooked meat right about now.

Ah, I could talk about the BBQ all day, but that’s not what’s on the menu today. Instead, we have this: raw meat. Not only does it not look as appealing as cooked meat, but it can also cause you a lot of trouble. Undercooked or raw meat and poultry can be contaminated with harmful bacteria, such as E.coli, salmonella, and Yersinia. If there are bacteria in the meat, it can make you really sick. Usually, this includes diarrhea, stomach cramps, vomiting, and a fever.

And if you feel fine after eating your first raw meat dish, just wait a little bit before passing judgment. After you’ve eaten the bacteria, it can take up to 24 hours to experience symptoms. And they can last for many days, depending on the type of bacteria. If you still want to proceed with the diet, you’ll need to be careful of what kind of meat you’ll be putting in your body. You might want to stay away from chicken, because it tends to contain more harmful bacteria like salmonella.

Since chicken has a more porous structure, it’s easier for bacteria to penetrate deeply into the meat. That’s the reason why, when you’re cooking chicken, you can’t just sear the surface to kill all the pathogens. Also, to reduce your chances of eating bacteria-filled meat, you should only eat locally-sourced and organic meats that have not been overly processed. And that would quickly start to get really expensive.

But according to raw meat enthusiasts, it would all be worth it. They say that once your body gets used to eating raw meat, you’ll get a lot more nutrients and protein than you would from the cooked alternatives. In a serving (100 g (3.5 oz)) of raw ground beef, you get a whole 17.2 g (0.6 oz) of protein!

However, there is such a thing as too much protein. Research shows that eating more than 2 g (0.07 oz) of protein per kg of body weight daily can cause symptoms of dehydration, nausea, irritability, headache, and indigestion. It can also increase your risk of severe health problems such as cardiovascular disease, liver and kidney injuries, and even death. So maybe spending your days eating raw meat isn’t the best idea.

If you’re going to go for a raw diet, it’s best to also include raw vegetables, and get nutrients from other foods instead of just raw meat. It is also important to note that just because our ancestors did something a certain way doesn’t mean that we need to.

What If We Had No Hair?

What If There Were Life After Death?