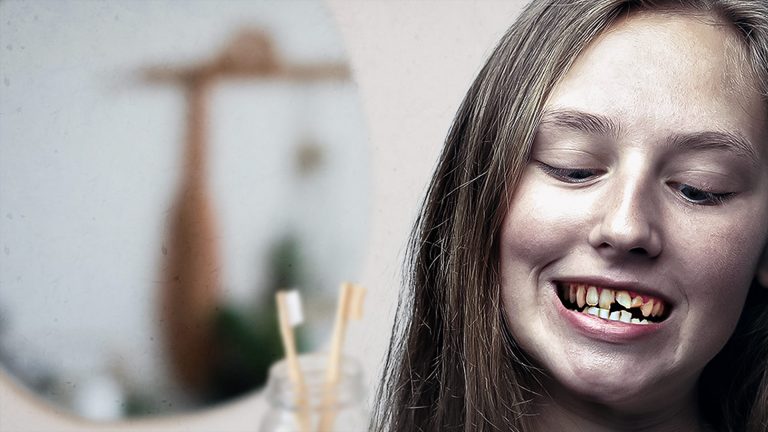 This man didn’t brush his teeth for over two years. And unfortunately, he had to get a lot of his teeth removed due to them decaying. This is what would happen if you stopped brushing your teeth for two years, but what would happen if you stopped forever? How much bacteria lives inside your mouth? How could this affect your overall health? How long could you last before your teeth fell out?

But before we get to that, what lives inside your mouth on an average day? Over 6 million bacteria, from 700 different species, live inside your mouth. Now, not all of these are bad for you, in fact, a lot of them promote good health. But some bacteria living in your mouth are harmful to you. That’s why you brush your teeth since it helps get rid of that harmful bacteria.

And now, you’ve suddenly decided to stop brushing. A week has gone by, and you’re starting to notice some serious bad breath. People
stay a little bit further away from you when you try to talk to them. But bad breath would be the last thing on your mind. After just a
week of not brushing your teeth, the plaque on your mouth would begin to harden and form tartar. This is like a really hard plaque that discolors your teeth, and at this point, only a dentist would be able to get rid of this.

And on top of all that, your enamel would begin to be damaged as bacteria continues to increase in your mouth. Now that’s one week of not brushing. Let’s fast forward to one month in this crazy experiment.

And as time goes on, these cavities in your teeth would get worse and worse. You’d also start to develop gingivitis which would inflame the gums around your teeth. And good luck trying to eat anything because, at this point, your gums would be incredibly sensitive.

And this would continue for about a year. And after that, you not brushing your teeth would lead to periodontitis. This is when the inner layer of your gums starts to pull away from your teeth and form pockets that would collect food and bacteria. With all this extra bacteria in your mouth, your immune system would start to destroy your gums. And after your gums start to go away, you’d lose your teeth as they fall out of your mouth and decayed.

And now that you don’t have any teeth, you could start to have health issues outside of your mouth. A study in Caifornia found that people who didn’t brush their teeth daily had a 20 – 65% greater chance of getting dementia than those who brushed multiple times a day. And for all the guys out there who decide to stop brushing your teeth? Well, that could lead to erectile disfunction. In a 2012
study, it was found that 53% of the patients with erectile dysfunction also had severe periodontitis.

I’ve been brushing my teeth twice a year for the last 15 years and never had a cavity or filling explain this?

This isn’t true, I have gone as long as 6 months without brushing my teeth, even now I only brush one every few weeks and I’ve never had any of the issues mentioned in this video, unless I’m just built different, this video must be false.

What if Earth Dropped to Absolute Zero for 5 Seconds?

What If We Woke Up Volcanoes to Fight Climate Change?