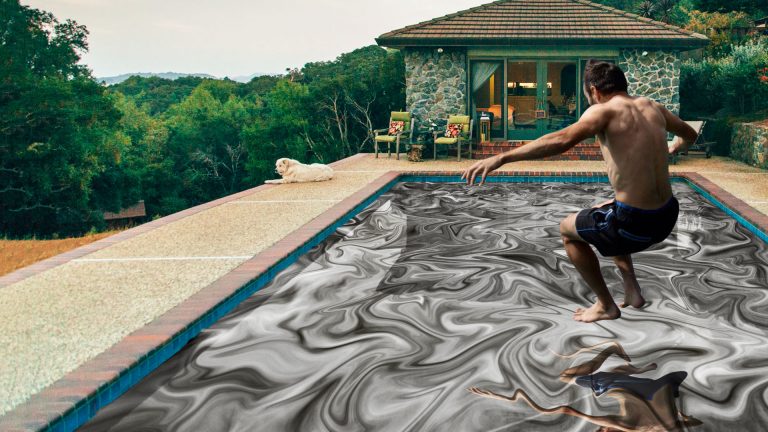 This shiny metal is constantly in a liquid state. This is mercury. We normally see this metal in tiny quantities. But what would happen if we took thousands of liters (quarts) of it and filled a pool entirely with liquid mercury? And then, what if you jumped into it?

What would liquid mercury do to your skin? How would it affect your brain? And could you swim in it?

Mercury is more than 13 times denser than water, and substantially heavier. It’s also much thicker, with greater surface tension than water as
well. So what would it feel like if you jumped into a pool of this liquid metal?

Before we fill up our pool with liquid mercury, we’re going to need to find a lot of it. Mercury is a rare metal found in the Earth’s crust. And due to it being so rare, it’s also quite expensive. Filling an entire pool full of liquid mercury would cost thousands, if not millions of dollars.

Once you’ve acquired all your liquid mercury, you could now fill up your pool. But due to liquid mercury being so much heavier than water, you’d need to make sure that your pool is reinforced to handle such a heavy weight.

OK, that was very time consuming and expensive, but we finally have our pool full of liquid mercury. And now, it’s time to jump in. And as soon as you jump in, you’d be met with a thud rather than a satisfying splash.

Due to the density of the liquid mercury, you wouldn’t sink down into the pool. Instead, your feet would be submerged, and that’s about it.

If you were to dive headfirst into the pool from a 3 m (10 ft) ladder, then you’d probably get knocked out from the impact of hitting the liquid mercury. But assuming you jumped in from a smaller height, the impact wouldn’t do much damage to you.

But although the damage wouldn’t come from the jump itself, that doesn’t mean you’d be safe. Assuming you jumped into the pool with standard swim attire, you wouldn’t be wearing any shoes.

This means, at first, your feet would be making direct contact with the liquid mercury. This would cause severe burns and irritation. And this would only worsen, as you’d most likely lose balance from just standing on your feet.

It would be like standing on watery Jell-O and would be incredibly difficult to balance on. So you’d most likely fall on your back or stomach. You still wouldn’t sink in, but now, your whole body would be covered with the liquid mercury.

And the longer it stays on your skin, the worse it would get. Prolonged exposure to liquid mercury would lead to it getting absorbed by your skin. And once that happens, the mercury would make its way to your organs, and then your brain.

This is where mercury poisoning would come in. And if you think you could avoid this by wearing a wet suit, and avoid mercury touching your skin at all, think again. That’s because just inhaling the liquid mercury fumes would lead to you getting poisoned by it. Sometimes even faster than just touching it.

The longer you stay in the pool, the worse it would get. You would start with a headache and feel woozy. At this point, you should probably get out of the pool. But even if you managed to survive this long, this much exposure to liquid mercury would stay with you for a long time, if not forever.

Over time, the symptoms of mercury poisoning would include speech difficulties, lack of coordination, and even vision loss. And if you didn’t manage to get out of the pool, you would surely pass out and die from metal’s fumes.

What If You Only Drank Coffee?

What If a New Continent Formed Tomorrow?

What If We Nuked the Sun?