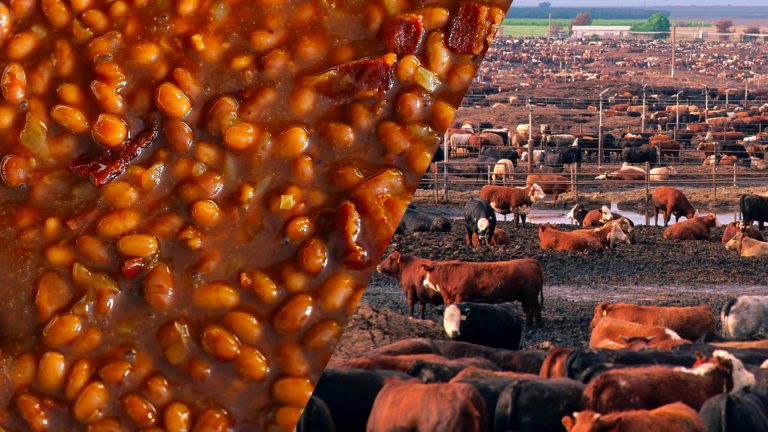 It’s delicious, it’s packed with protein and fat… and a driver of global climate change? That’s right, this is beef.

But what if we all just stopped eating it?  How would it affect your health?  And would not eating beef have global consequences?

Not only is it a huge part of regional diet and culture, it is also a large part of the United States economy, contributing around $165 billion dollars to the US according to a 2014 economic analysis. It’s a growing industry with nearly 13 billion kilograms (28 billion lbs) of US beef production annually, the largest of any country in the world.

Seems great for business, except for the fact beef releases 37% of all human-induced atmospheric methane (CH4) in the US alone. Human-induced methane is defined as methane brought about by our human behaviors and activities.

And beef, along with other livestock production, is responsible for more greenhouse gas emissions than all the world’s cars, planes, and trains.  There’s definitely a lot tied into the beef production industry, so how would a switch from beef to beans affect the US? How would it affect the rest of the world?

Beans don’t often get the spotlight, but maybe they should.  These seeds, yeah, they’re seeds, are loaded with protein and fiber, but way lower in fat, saturated fat, and cholesterol than animal products.

Fiber, which 97% of Americans don’t get enough of, can help control weight, blood glucose and cholesterol. Beans are also light on the wallet. Much cheaper than beef! A half kilogram (1 lbs) of pinto beans costs about $1.20, with the same amount of lean ground beef now typically costing around $5.70.

And while beef is a good source of minerals, vitamin B-12, and protein, too much of it can put you more at risk of heart disease, certain cancers, and digestive issues.  The American Heart Association and the American Institute for Cancer Research both suggest you eat more plants and less meat, so substituting beans for beef would probably be a huge boon to your health!

Other than your health and bank account, how would making the switch from beef to beans affect the rest of the world?  In 2018, the Intergovernmental Panel on Climate Change stated that we only have until 2030 to stop the globe from warming to a level over 1.5C (2.7F) more than pre-industrial era temperatures.

Beyond that and the risk of drought, floods, extreme heat and poverty will increase drastically. That doesn’t sound too optimistic for the future of our world.

So where does beef figure into all this? Well, while people usually focus on carbon dioxide (CO2) as the bad boy of greenhouse gases, methane (CH4) and nitrous oxide (N2O) are also major players.

More than half of these non-CO2 emissions come from – you guessed it – livestock farming. A single cow can burp and fart up to 320 liters (84 gallons) of methane gas every day.

Without the demand for beef, the global population of over 1.5 billion cows would decrease, significantly reducing the amount of methane released into our atmosphere. Methane traps heat in the Earth’s atmosphere and has 23 times more warming potential than carbon dioxide. Less cows mean less methane, and that would help slow rising temperatures across the globe.

But it doesn’t stop there. It takes 15,000 liters (3,962 gallons) of water to produce just 1 kilogram (2.2 lbs) of beef. That’s twice the amount of water needed for pork production, and three times the amount needed for chicken.

Kidney beans only need 1,500 liters, which is a tenth of the amount of water required for beef. Consuming beans instead of beef could help alleviate any water scarcity looming in the near future.

Beans also use much less land. Just one-twentieth of land per unit of protein consumed compared to beef.
Seeing as 35% of all US farm operations are beef farms, switching to beans would free up a lot of land.

The newly available land could be turned into parks and wild areas. Or it could be used to grow other types of food, which could help mitigate growing food demand.

Both the ranchers and the US economy would take a serious blow. We would have to figure out a way for ranchers to transition from a tradition-based livelihood to something else.

And that’s just if you gave up beef, not all meat. Even if you have to phase beef out slowly, it’s a great way to begin your personal fight against climate change.  Sometimes, global occurrences can seem out of our control. But what we eat is something we actually have major power over.

If you remove all animals including humans, climate change would continue due to many geological and astrophysical events. Earth has warmed and cooled many times over the eons and glaciers were around NYC only 10000 years ago. As our human population approaches 11 billion in a few decades, if we have not adapted, nothing will work. Also, animal rights people want to preserve all living beings. Desalination of ocean water, reforestation, proper off coast building are all required until the next ice age. One can only hope political blame will disappear.

What If it Rained Every Day for a Year?

What If the Megalodon Shark Never Went Extinct?

What If We Woke Up Volcanoes to Fight Climate Change?