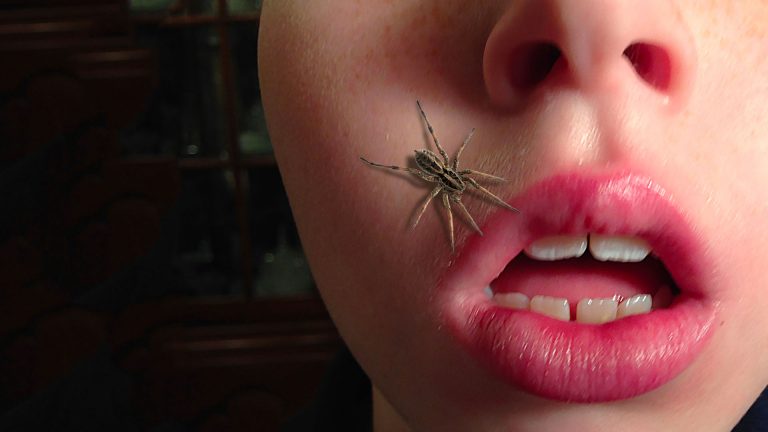 Have you ever felt that creepy sensation of bugs crawling on your skin in the middle of the night? Don’t worry, It’s probably all in your mind. But it could actually be spiders. If you happened to swallow one, should you be worried?

Would a spider survive inside a human body? What would happen if you ingested a venomous spider? Could they lay their eggs in you?

Chances are, some annoying friend of yours has told you that humans swallow on average eight spiders every year. Well, I hate to break it to you, but your friend’s right. The good news is, most of the time, spiders will die on the way down and you get a little protein boost. They’re also rich in folic acid and zinc, so think of it as a healthy late night snack.

As creepy as this all sounds, there’s no need to worry. Unless you’re suffering from arachnophobia, or even worse, Delusory Parasitosis. Known commonly as Ekbom syndrome, this rare psychological condition provokes the delusional fear of being infested by an insect. Sufferers of Ekbom syndrome often feel itchiness, numbness or that creepy crawly prickling sensation under their skin.

Well, if bugs crawling on you is just a delusion, could a real spider actually survive inside you? Generally, spiders won’t target humans unless they feel threatened. But what if one just happens to falls in your mouth? Could it poison you? Well, despite popular belief, there is no such thing as a poisonous spider. Simply put, they’re not toxic to us. In fact, in some cultures, fried spiders are a delicacy.

Ok, eight-legged snacks aside, what if a venomous spider happened to make its way inside you? Could it kill you?

There are around 40,000 species of spiders and only about 12 of them can cause serious harm to humans. Take for instance, the highly venomous Sydney funnel-web spider, or Atrax Robustus.

They can grow up to 5 cm (2 inches) long with fangs strong enough to bite through a fingernail. So much for that manicure! They’re also clingy and like to dig in to ensure their venom enters the bloodstream of their prey. To make matters worse, they have been known to survive underwater for up to 30 hours. As resilient as they are, thankfully, our stomachs are far more acidic than water, and even a venomous spider is no match for that powerful gut of yours.

Unless, of course, it happens to latch on to your esophagus on the way down. Then, you would need about 2-12 anti-venom injections, depending on the severity of your symptoms. There’s also the slight chance that you’re allergic to them, in which case, I’d keep that EpiPen in close reach. Luckily, venom can only affect you if it’s injected. So even venomous spiders are safe to accidentally consume.

So what if a spider decides to lay its eggs in your ear? This is highly unlikely, so you can take those ear muffs off. Even if you did find a nest, all you’d have to do is rinse them out. Spiders burrowing in humans is a popular urban legend, but in reality, they’re more likely to avoid you, so don’t expect any superpowers overnight. Even if they somehow managed to set up shop in your ear, once the baby spiders hatched, they would probably leave your body in search of food. Not exactly a pleasant experience, but nothing a good shower can’t fix!

So you might be asking yourself, should I wear a bug net while I sleep? Well, there’s really no need. Spiders can sense danger through vibrations, and we produce a lot of noise. This ‘spidey-sense’ would likely trigger if you’re snoring like a chainsaw or even peacefully breathing.

So thankfully, your noisy slumber will likely deter them. Even if you sleep with your mouth open, if a spider managed to crawl in, you would probably just cough really hard and kill them in the process. So the good news is, spiders simply cannot survive inside you. They are far more likely to hang out in dark and secluded areas that aren’t a part of your body. With that said, it might be time to clean out that closet of yours. Better safe than sorry.

I am going to shatter this piece of lie article, I am living proof that spiders can live in a human body, for years. And I have the medical proof to prove it. On my mri scans

What If You Didn’t Change Your Underwear For One Year?

What If You Had Twice as Much Skin?