What If Your Bones Were Bulletproof? 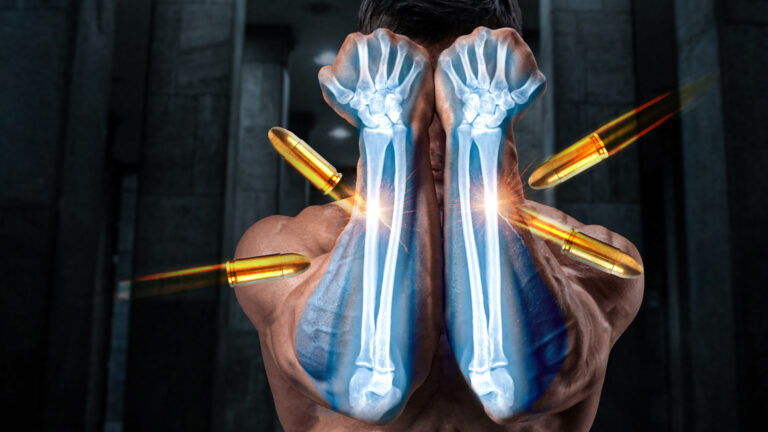 Bullets can rip through your organs, dislocate your limbs and shatter your bones. But not today. How could your bones become bulletproof? Which superhero would this make you similar to? And why would this turn your life into a living nightmare?

Bones. Hard to imagine your body without them. In a large variety of shapes and sizes, these hard tissues made of calcium are what give you your shape. They also protect many of your most important organs. Without your skull covering your brain or your rib cage guarding your heart and lungs, you’d be a lot more vulnerable to injury and death.

But they aren’t completely impenetrable. Getting shot could still rip a hole right through your body. So why wouldn’t you want your bones to be able to stop bullets in their tracks? Unless, of course, it meant you’d never be able to get a night’s sleep without pain. In terms of their weight, your bones are already stronger than steel.

One cubic cm (0.06 cubic in) of bone can bear a load of about 517 kg (1,140 lb). That’s heavier than a grand piano. So maybe all you’d need to do for your bones to be bulletproof is make them a little denser. One man with bones eight times denser than normal was able to walk away from a serious car crash without a single one broken.

Separated from the rest of the softer parts of your body, your skeleton weighs around 10.5 kg (23 lb). So if we wanted to make your bones denser without them shrinking in size, you’d have to put on a little extra weight. One way you could do this while adding some additional heft would be to coat your bones in liquefied metal, just like Wolverine from X-Men. But this would definitely come at a cost.

If you added a 5 mm (0.2 in) layer of metal to all your bones, in theory they would be more resistant to the damage a bullet could cause. But in this case, the cons would really outweigh the pros. Literally. As expected, your weight would increase. But by how much depends on the metal. You’d now have restricted movement and this added metal insulation wouldn’t necessarily protect your bones so much as harm them.

Your bones need blood to absorb nutrients and oxygen. Cutting them off from their surroundings would lead to the bone tissue decaying. And not to rain on your parade, but Wolverine’s skeleton is covered in a steel alloy called Adamantium. Sorry to say this doesn’t actually exist. But maybe scientists could develop something similar just for you.

If you had super-cooled amorphous metal covering your bones, they’d be stronger than normal steel. But you’d lead a pretty miserable life. You’d be in nearly constant pain. You’d start to lose control of basic bodily functions. And with their blood supply gone, your bones would begin to crack and eventually collapse.

At first, you’d only notice the pain here and there. But eventually, it would hurt so bad that even lying down for a night’s sleep would be an excruciating experience unlike any other. A better option to steer scientists toward would be a form of titanium with a foam-like structure. This metallic foam would better match the normal properties of your bones, like flexibility and allowing all the blood flow they need.

But I still wouldn’t jump in front of a gun any time soon if I were you. Bulletproof bones wouldn’t mean much for the unprotected parts of your body. Getting shot point-blank in the ribs may no longer be a big deal, but it wouldn’t make you invincible. So be happy with the bones you’ve got. Because it’s better than having no bones at all.

What If We Discovered Alien AI?

What If a Rogue Star Collided With the Sun?