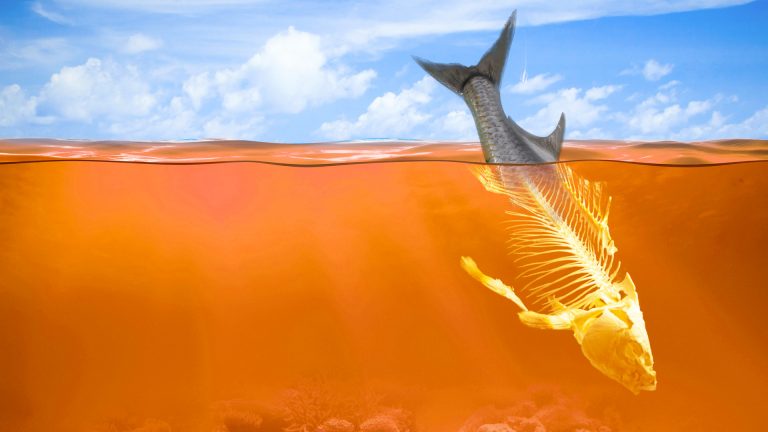 It can instantly cause severe burns on your skin. It can even dissolve things like limestone and concrete. This is battery acid.

What would this acid do to ocean wildlife? What would swimming in this be like? And how could this affect our cities?

To put what we’re about to do in perspective, our oceans have a pH of around 8. pH levels are a measure of how acidic or basic a solution is. Battery acid has a pH of 0, right at the bottom of the scale, meaning it is incredibly acidic.

And scientists are expecting something like this to happen, with 100% of the Arctic Ocean becoming corrosively acidic by the year 2100. But what if we speed this up? And make it affect all our oceans?

First, we should figure out why something like this is happening. Due to climate change, the ocean is absorbing more carbon dioxide than ever. And when that happens, it dissolves and reacts with the water, creating carbonic acid. Over time this can cause our oceans to become incredibly acidic, harming fish, coral reefs, and even the ocean floor itself.

If something like this were to happen overnight, it’s safe to say that all the fish you like to eat would be killed, and be quickly dissolved by the acid. There are nearly 230,000 different species in the ocean. And that’s just what we’ve found. Scientists estimate there are over 2 million more species we have yet to discover.

So tons of fish would be dead, but what about more robust fish like sharks? Although they have much thicker skin, they would die relatively quickly as well. So would mammals like dolphins and whales.

What about crustaceans like lobsters and crabs? Well, they’d definitely have a better chance of surviving, due to their hard shells protecting them. But that would only happen if the oceans gradually got more acidic. With it happening instantly, every species in the ocean would go extinct.

And even if a species could miraculously survive, losing all the others would destroy the food chain. So they would go extinct as well.

But what if something like this happened over the course of 100 years? Would all the creatures in the ocean be able to adapt? Well, no.

Something like this happened 55 million years ago. And even though it took place over thousands of years, it caused a mass extinction event. So regardless of how long it takes for the oceans to turn to acid, it would kill any living creature within it.

So now, with all the fish dead, what’s left in our oceans? Well, the coral reefs might be able to hold out a bit longer, but they won’t last forever. Once they start to dissolve, we’ll also begin to see these oceans of acid affect what we have on land.

Our oceans already dissolve and erode our coastlines, but slowly. But since our oceans have turned to acid, the process would occur much faster. Over time, the oceans would start to take over our land, gradually dissolving coasts, then making its way to our houses, and eventually our cities. And since this was all caused by global warming, which increases the chances of hurricanes, imagine these acid waters flooding our streets.

If that were to happen, our homes, buildings, and roads would all start to dissolve and fall apart. And it would inevitably make contact with your skin, causing it to burn. Yeah, swimming in this acid would be out of the question.

And as this happens more and more, millions of people would become injured or die, and the oceans would start to take over the Earth. Anyone who managed to survive, perhaps up on a mountaintop, would eventually be left with nothing.

So turning our oceans into acid would be a horrific idea. If we do want to mess around with acid, maybe we should take some stomach acid and fill a swimming pool with it. And how about we try jumping into it, just to see what happens?

What If We Discovered Alien AI?

What If the Spanish Flu Never Happened?