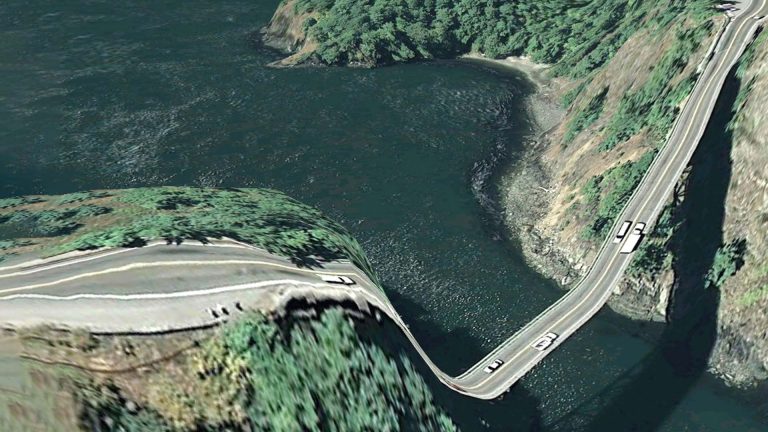 What would it take to construct the longest road on Earth? How long would you spend behind the wheel to complete this epic journey? And why would building this highway upset environmentalists?

There are about 64 million km (40 million mi) of all kind of roads around the globe. But not a single highway network can take you from New York directly to Cape Town. The hypothetical freeway we’re about to build would easily take you from Colombia all the way to Indonesia.

Combine that with some of the existing road systems, and you might just be able to drive anywhere in the world. But that would be a very expensive engineering achievement. Because the big part of this highway would have to be constructed underwater.

On average, it takes about five to ten years to build a highway. But we wouldn’t be building just any highway. We’re aiming for a 40,000 km (25,000 mi) long, two-lane equatorial road. To construct it in about the same timeframe, we’d need to be working on different parts of it at the same time. Our globe-spanning highway would require about 8 million skilled workers, and some $9.2 trillion to build.

Yeah, those are some whopping numbers to consider. And what would it be like to drive on it?

I’d say it’s pretty cool. The equator cuts through 13 countries, and three oceans. Say, you start in South America, in Ecuador, and travel east through Colombia to Brazil. You’d be enjoying a humid tropical climate, and very high temperatures. So make sure your car’s air conditioner is working before you leave for the trip.

You’d be passing over mountains and the Amazon river. And if you decided to go for a refreshing swim, remember that the Amazon’s full of blood-thirsty piranhas waiting to eat you in a matter of minutes. Just joking, piranhas are actually calm scavengers, so you can go for a swim, at your own risk.

Your Amazonian adventures would just be the beginning. You’d soon reach the Atlantic coast of Brazil, and you’d be about to enter the first underwater stretch, the Great Atlantic Tunnel. And the view here is rather dull. Hopefully, some parts of the tunnel would have walls made of some very durable glass, so you’d have something to look forward to.

Finally, there’s land. After days of travel, you would make it to Africa. You’d be driving through the savannas, swamps and dense rainforest of Gabon and Congo, and into the deserts of Kenya and Somalia. On your way, you might see elephants, gorillas, buffalos and leopards on your way. And that would make the long trip through the tunnel kind of worth it.

But then you run out of land. And you enter another underwater tunnel. This time, it’s the Great Indian Tunnel. I see land, again. It’s Indonesia, with its 17,000 islands scattered around the equator. You’d be driving through a series of short tunnels to cross from one island to another. And every time you got back on land, the scenery would be majestic. Volcanic landscapes, rice fields, tropical rainforests. I bet you could use a day at the beach after such a long drive.

Okay, it’s time to move on to the next tunnel, the Great Pacific Tunnel. Is it just me, or this one is like three times longer? Ah, no, this is the longest underwater stretch of the entire trip. And by the end of it, you’d have a little bonus in the form of the last exciting spot of the highway, the Galapagos Islands. A showcase of evolution, where the most unusual forms of life are thriving in the wild. Ah, that’s a feast for the eyes after the long drive.

Then you would drive a little further, through one last short underwater tunnel, and end up right where you started, in Ecuador. Congratulations, you made a road trip around the globe. Traveling at 100 km/h (62 mph), you’d spend some 400 hours, or about 17 days, at the wheel. Twelve of those days, you’d be stuck inside a tunnel under the ocean.

With some breaks for the night, rest, and time to enjoy the sights, the entire travel time would add up to at least two months. Hope you can afford such a long vacation. But as much fun as this idea could sound, this would be an enormous hit on the planet. The construction of the highway itself would disrupt ecosystems both on land and in the ocean. On top of that, during this epic trip, your car would emit almost twice as much carbon dioxide as the average car does in a year.

Looks like we’ll never see a highway like that running along the equator. Maybe we could start building flying cars that would require a different type of highway altogether.

Please do “what if it rained food”? (Cloudy with a chance of meatballs irl)