What If You Fell in a Pool of Alligators? 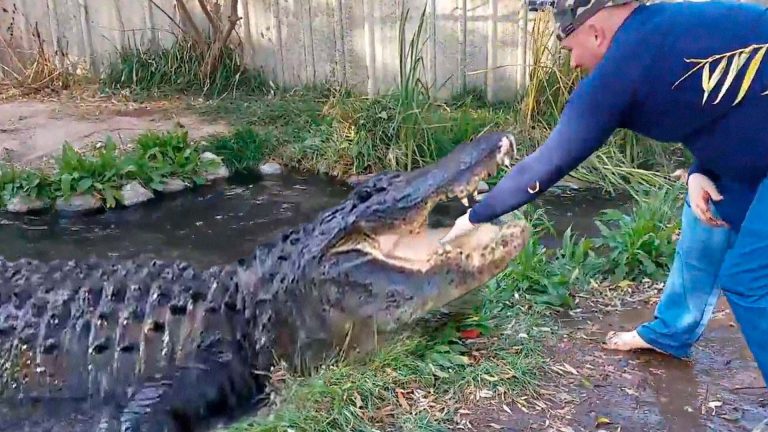 They’re big. They’re green. They could be human-eating machines. Why not go ahead and take a dip in a pool full of alligators? How could you fight them with your bare hands? Which gator body part would be the most vulnerable? And why should you just let them bite you?

Alligators are essentially our very own modern-day dinosaurs. These reptiles can reach sizes up to 4.2 m (14 ft). And they can weigh anywhere from 320 kg (700 lb) to 450 kg (1,000 lb). Gators are incredible predators. As a group, known as a congregation, they’ve been observed to hunt together. And not just as lone rangers in the same place at the same time. But with collective strategies to direct their prey and conserve their own energy.

But once they get their cone-shaped teeth into prey, it’s almost always game over for the wide range of animals they’re on the prowl for. That’s everything from fish to turtles and even deer. Oh. And you too. As you prepare to cannonball into the water on this hot summer day, you’d notice a few surprise guests hanging out under the surface. Gators. A bunch of them.

Too late. Your last-minute panic would cause you to belly flop right smack into the water. Large ripples would fly across the whole surface of the pool. Such a grand, unexpected entrance could be the biggest mistake you’d ever make. And your last. Alligators are generally scared of humans and wouldn’t attack you unless provoked. Or if they’re extremely hungry. And this group would be both.

The alligators would detect the disturbances in the water with pressure receptors they have near their jaw. These small dark spots on their skin are called dome receptors. Well, you could identify them, if you weren’t flailing to get yourself out of the pool. But escape wouldn’t be so simple. You’d be surrounded by a circle of alligators, slowly pushing in around you.

You’d even notice several alligators outside of the circle that seem to be totally at ease or resting. Don’t be fooled. They’d be waiting to jump into the action. That’s when one of the alligators would attempt to sink its teeth into you. But it wouldn’t release you right away. Instead, it would try to drag you to the bottom of the pool.

American alligators can hold their breath underwater for up to 24 hours. Drowning you would be part of their strategy. That way they’d be able to dismember your lifeless body at their own leisure. So you should fight back as hard as you can. The best maneuver? Try gouging their eyes out or punching their snouts. You wouldn’t be able to do much to the rest of their body due to their protective reptilian skin.

Alligators don’t actually like to fight. Giving them a hard time would make it much more likely for them to release you from their grip. But this would be no easy task. Especially, if a gator gets you into their aptly-named death roll. If this happened to you, surprisingly the best thing to do would be to simply go with the flow. Or the roll, in this particular case.

As this is underway, keep trying to gouge its eyes. Death rolls require so much energy from the gator that if you managed to stay conscious, you could find yourself with a second chance at life. With that second chance, get out of the pool as fast as you can. Of course, considering the unfortunate set of circumstances you find yourself in, this would be unlikely.

But if somehow you did, you’d want to put as much distance between you and them as possible. Though not necessarily with speed. Gators can run up to 48 km/h (30 mph), but only in short bursts. If you ran in a zig-zag, you might manage to tire your pursuers out. Nature might be able to help you a little here. Alligators don’t typically catch their prey by chasing them, so they might not even follow you out of the pool.

Safe on dry land, you could breathe a sigh of relief. But only for a moment. You’d need serious emergency medical care for your gaping wounds. You’d be at a high risk of developing an infection. That’s because there are numerous kinds of bacteria living in a gator’s mouth. These come from the animals that they eat, as well as their environment.

Though maybe you’d be lucky they were in a relatively clean pool. And you could also count your lucky stars that you didn’t end up in a pool full of something possibly more dangerous. Like sharks.

What If You Swallowed Liquid Mercury?

What If the Megalodon Shark Never Went Extinct?