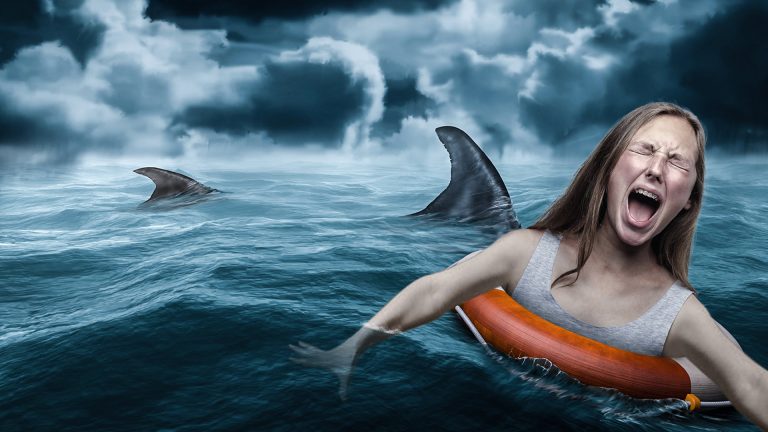 This man is about to dive 20 m (65 ft) off the top of a cruise ship. What will happen to his body when he hits the water?

Well, luckily for him, and others, the impact of hitting the water wouldn’t be the worst part of going overboard. The worst part would be what could come next: being lost at sea.

Even if you’re wearing a life jacket, surviving all alone in a giant body of water until someone rescues you will not be easy. What would be the biggest threat to your survival?

How could fish eyes save your life? And how long would you have before the water starts breaking down your skin?

We say 24 hours because it’s a nice number, but the reality is that you’ll be lucky if you even last that long. Hypothermia can set in within minutes, and dehydration and exhaustion would soon follow.

One crucial thing to keep in mind is that you’d be surrounded by saltwater. You can’t drink it, but it could save you from drowning.

Not only is saltwater more buoyant than freshwater, but it’s also safer to inhale. If you’re going to drown in saltwater, it’s because the water you inhaled into your lungs stopped you from getting oxygen and expelling carbon dioxide. But with freshwater, it can be a little more complicated.

Freshwater can kill you even after it’s been removed from your lungs. When you inhale salt water, the higher salt concetration prevents the water from crossing into your lung tissue.

When you inhale freshwater, it can enter unprotected lung cells, and make them swell until they burst. This can lead to such severe damage that you might not recover, even after the water is removed from your lungs.

You’ll be losing water from sweating, urinating, and even breathing. As dehydration sets in, you’ll start to feel extremely thirsty, dizzy, confused, and fatigued. None of that will raise your chances of survival.

If you’re lucky, it will rain. Rainfall will provide a good source of drinkable water. Just lay on your back and open your mouth.

But if you don’t get any rain, you’ll need to be a little more creative. Try to catch a large fish. If you’re successful, then all you have to do is eat its eyes. Big fish eyes are full of a watery liquid that will surely quench your thirst.

Yes, I know. It’s gross. But there’s no time to think about that, because you still have to worry about hypothermia.
Generally, you can expect to survive in 5 °C (41 °F) water for 10-20 minutes before your muscles will get weak, and you lose your strength and coordination.

This happens because the blood moves away from the furthest parts of your body and towards the core. The best way to prevent hypothermia is to pull your knees up to your chest, and keep them there, so you can retain as much heat as possible.

The less you move around is also better for conserving your energy, and not attracting predators. As you’ve probably gathered from the past few minutes, finding yourself in this scenario would be very bad.

Your best bet at surviving in the sea is to avoid getting into this situation in the first place. If you’re going out on a fishing trip, or a boat, remember to tell people where you’re planning on going, and when you’re supposed to be back.

Technology is making it easier to find people who get lost in water. But the more information, the better, when it comes to rescue missions.

You’d want to be rescued from the water as soon as possible, because being submerged in water for any longer than 24 hours can lead to your skin breaking down. If this happens, you’ll have open sores, and you would have a greater risk of fungal and bacterial infections, even if the water is completely sterile.

What If a Marshmallow Hit the Earth at the Speed of Light?

What If You Were Attacked by a T-Rex?