What If You Stepped on a Rusty Nail? 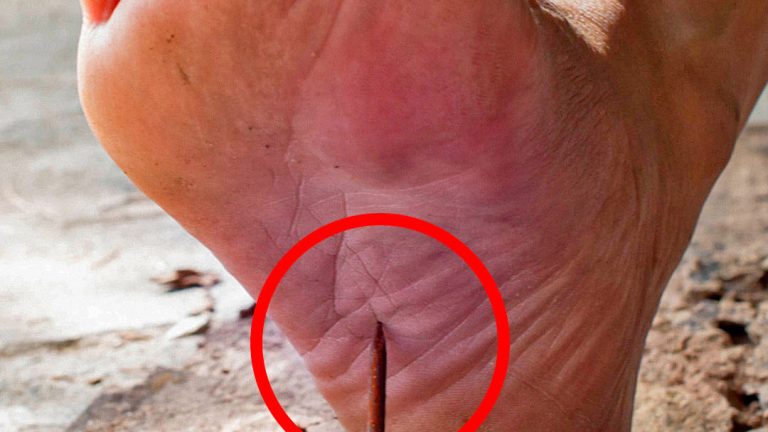 Yikes. You just stepped on a nail. Worse yet. A really rusty nail. What would all that rust do to your body? How long would you have before an infection kicked in? And how could this one rusty nail lead to your death?

Your skin is the largest organ of your body. And yet, the smallest incision or puncture to it opens up the floodgates to all the bacteria in the outside world. That exposes you to health risks and infections. Stepping on a nail would result in a wound that is deeper and narrower than a regular scrape or cut.

This means you are at a higher risk of infection, but the damage is usually considered minor and easily treatable at home. But if the nail is coated in a reddish-brown or orange-brown color, it means it’s covered in rust. The chemical reaction between iron and moisture from air or water. So how does rust make this painful accident even worse?

The first thing you need to do after stepping on a rusty nail is remove any rust remnants remaining in your wound with clean hands. After that, you should apply some pressure to the wound. This would stop the bleeding. And if you are thinking of rubbing alcohol or hydrogen peroxide, stop. These products can harm the tissue and mess up the healing process. Soap is all you’d really need.

That is, if you have it handy. Now take a moment to think about the last time you had your tetanus shot. Tetanus, also known as lockjaw, is an infection caused by the Clostridium tetani bacteria. This bacteria can easily contaminate a rusted surface like the nail you just stepped on. The pain might make it hard to remember, but do your best.

About one in ten people infected by tetanus die. Tetanus on a nail would disperse in your blood. And after eight days, you’d start experiencing muscle spasms and contractions. The first sign of trouble would be stiffness in the jaw, known as trismus, followed by a tightness in the neck.

You’d have a real hard time swallowing before that rigidity begins to settle in all of your body’s muscles. Add to that a bad fever, elevated blood pressure and a rapid heart rate. It could be months before you fully recover from this infection, and if not treated immediately the constant spasms may lead to brain damage due to lack of oxygen, broken bones, pneumonia or even death.

What’s the most effective way to prevent tetanus? Get the tetanus toxoid vaccine, and make sure you receive your booster shot about every 10 years. Even if after stepping on a rusty nail you can’t remember if or when you got it, play it safe and take the shot. Oh, and bear in mind that tetanus is not the only thing you could contract from your pointy nemesis.

You could get an abscess or a bad case of cellulitis. So keep your shots up to date and watch where you step. Otherwise, you could end up falling into quicksand.

What If Russia Started a War?