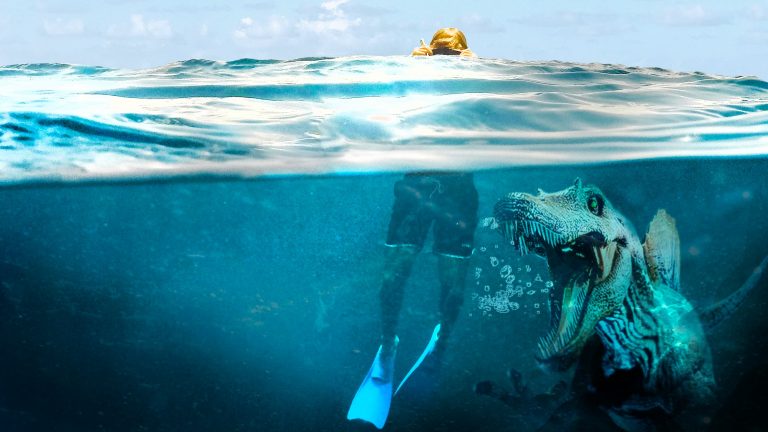 Why are these crocodiles spending so much time on dry land? Is it because their watery homes are too polluted?

Or is it because they’re scared of a bigger predator lurking in the water? An ancient dinosaur that we thought was long gone, but it never left?

Meet the Spinosaurus. It’s more massive than the T.rex, likes to swim, and loves to eat anything that enters its territory.

If humans had been living alongside these river monsters all along, how different would our lives have been? The Spinosaurus lived about 95 million years ago. With a body length of 14-18 meters (46–59 feet), and an estimated mass of 12,000–20,000 kg (13–22 tons), it was the largest predator the Nile River has ever seen.

If it had somehow managed to avoid extinction of the dinosaurs, it would still be swimming there. And Egypt would have never developed to be what it is today.

Would ancient Egyptians still have been able to rely on the Nile River for food and transportation? Would they have found a way to co-exist with the giant river monsters? Or would they have fought them to the death?

The Spinosaurus had a long tail that produced a higher thrust, and was more efficient in water than the tail shapes of other dinosaurs. This made them very hard to escape from in the water. But they were not as threatening on land, because they were pretty clumsy, and not well-adapted to it.

So, if we lived in a world where the Spinosaurus still existed, then all we’d have to do is stay out of their water, and we’d be safe. Right? Not exactly. We wouldn’t be the only ones to fear these giant dinosaurs.

Today, lots of crocodiiles live along the Nile River. If the Spinosaurus had survived the mass extinction, and still lived in the Nile today, the crocodiles would be looking for a new home on land.

If crocodiles became land dwellers, the land along the Nile would look very different too. Crocodiles might eat small mammals, and humans would need to be more aware of their surroundings to protect themselves from the crocodiles.

Ancient Egyptian culture relied on the Nile River, and if the large semi-aquatic dinosaur was roaming around, they might not have been able to use it as much. Or at least they would have needed a way to protect themselves from the giant dinosaur.

Hunting the Spinosaurus wouldn’t have been easy, but it would have been necessary if Northern African communities wanted a steady supply of fish to eat. The practice would have become so important to the people’s survival that hieroglyphics would probably have had drawings of the dinosaur, and how the Egyptians captured and killed them.

Over the years, in true human form, we would probably have started hunting the Spinosaurus for sport and fashion. You think crocodile boots are cool? Wait until you see Spinosaurus sandals!

Maybe we would even have hunted them so much that they’d be on the brink of extinction. And what then? Would they become a protected species, or would we all be happy to see them disappear?

Well, before you go making “save the Spinosaurus” signs, just remember that none of this is really likely to have happened. The Spinosaurus probably died from the mass extinction event that wiped out the dinosaurs. If it didn’t, it would have quickly gone extinct soon after because of the lack of food.

There would have been massive competition for food between Spinosaurs, since the environment was more favorable for smaller creatures that didn’t need as much food. But that’s probably a good thing. Even though it might’ve been cool to live with dinosaurs, if these huge dinosaurs were still living, they would have changed evolution in Africa.

We might have had different fish, land animals, and ancient civilizations that were adapted for living alongside these massive creatures.

what about the song plays at the egypt part? i could not find it out.

What If Earth Were Teleported to the Edge of the Universe?