What If the Strongest Hurricane Ever Hit New York? 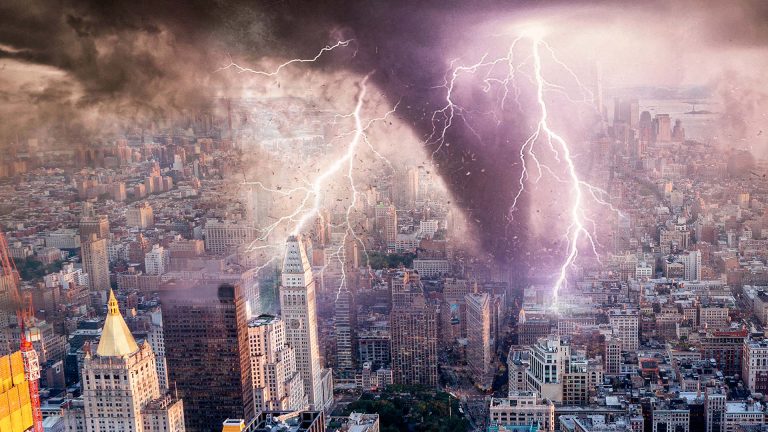 Hurricanes, typhoons, cyclones. They’re all one in the same. Storms. Now, the mother of all of them is about to hit New York and you’re caught right in the middle of it. What would make this the strongest hurricane ever? What kind of dangers should you expect to endure? And what, if anything, would be left when the storm subsides?

Hurricanes form when bad weather, like a thunderstorm, moves across warm regions of an ocean. As the storm pulls warm air from all directions, this heat energy becomes the perfect fuel for a perfect storm. As long as there is warm air and water for the storm to feed on, it will grow and grow. From a tropical storm to a category 1 hurricane. And the further up the scale it goes, the more damaging it becomes.

Super Typhoon Goni, the strongest storm to make landfall ever recorded, hit the Philippines in 2020. And with peak wind speeds of 314 km/h (195 mph), it decimated the country. But let’s go even bigger and badder. A category 6 hurricane is about to rock New York. Category 5 is the highest classification a storm can get. These storms have wind speeds of 252 km/h (157 mph) or higher.

And they’re catastrophic. Homes get destroyed, large areas are rendered uninhabitable and the power outages could last for weeks. Even months. But with the warming effects of climate change on our oceans and atmosphere, a whole new classification could be added to the mix. Category 6. A superstorm this strong would make a category 5 storm seem like a windy walk in the park.

The very first seed of this tropical storm would form in October, late into hurricane season. It would start as a low-pressure weather system that creates clouds and thunderstorms. Ten days later, this tropical wave, as it’s known, would evolve into a tropical storm in the Caribbean. But it wouldn’t stop there. After a few more days, it’s officially Hurricane What If.

And as it passes over Jamaica and Cuba, it would continue to grow in size and force, climbing from category 1 to 3 and even up to 5. From New York, you’d see the damage What If is causing in its path. But you still wouldn’t worry. Normally, these storms curve east and out to sea before they hit you. This time, you wouldn’t be so lucky.

Three weeks after it began, the storm would shatter records to become the biggest, strongest hurricane ever. Making its first landfall in New Jersey, it would slam the state with wind speeds up to 300 km/h (185 mph). When Hurricane Sandy made landfall here in 2012, the wind speeds were less than half of that. And when all was said and done, Sandy caused around two million people to lose power, $19 billion in damages and left 43 dead.

When our category 6 hurricane makes landfall in New York, you should expect astronomically more damage than this. The storm would be larger in size than half the U.S. That’s when the real chaos would begin. Storm surges over 8 m (19 ft) would cause rapid and dangerous flooding all over the city. From the beaches to the streets to the tunnels. Without mass evacuations, millions would be stranded or in immediate danger of drowning.

Water would gush into subway stations. It would sweep buses and cars down the street. Wastewater plants would be impacted, resulting in untreated sewage mixing with local waterways. If you were caught outside, you’d certainly be fighting for your life. Powerful winds would make flying debris a constant hazard. A category 6 storm would make the smallest objects into deadly projectiles.

Especially shards of glass from damaged skyscrapers that would sway in the wind like trees. If the wind managed to penetrate your storm-proofed building, all that air would make the roof and walls cave in. And that would mean even more projectile material in the wind. The power would go out too.

All of New York City and its nearly nine million residents would be in total darkness. Vital services such as healthcare, transportation and communication would be completely cut off. Millions of people would be desperate for rescue. Before all this is over, you’d find yourself briefly in the eye of the storm. Here, everything would seem calm.

The pressure in the center of this storm would be so low it would be like standing on a mountain peak 1,500 m (4,921 ft) above sea level. You’d be gulping for air. Finally, the storm would subside. On land, there would no longer be warm ocean water to fuel it. With so much infrastructure destroyed, you’d have no way out except by boat.

As you travel through the flooded streets of Manhattan, you’d see the whole city completely ruined. The power would be out in Times Square. Millions could lose their homes, and many would die. It sounds impossible, but maybe things could have been worse. After all, two hurricanes could have collided.

What If You Woke Up During Heart Surgery?

What If We Nuked the Mariana Trench?