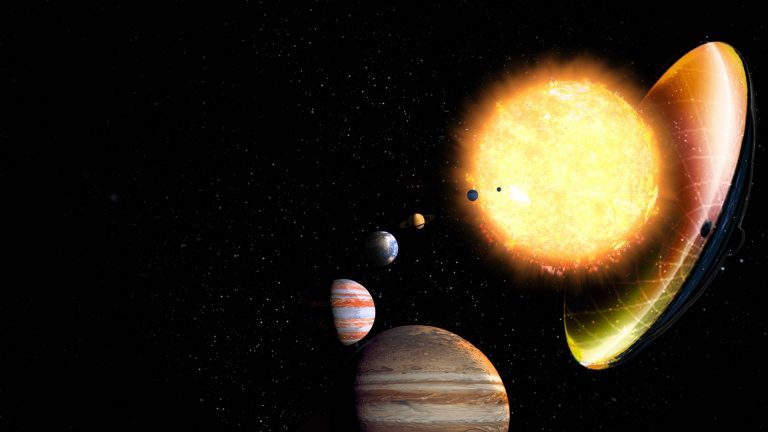 Moving is never easy. The packing and unpacking, having to start fresh and make new friends, all this can be challenging. Let’s face it, whether it’s a nasty landlord or an imminent threat to humanity, sometimes you just have to move!

In another What If, we’ve looked at moving the Earth to avoid certain danger, but what if that wasn’t enough? What if we had to build a stellar engine to move our entire solar system?

How could we do it? Where would we go? What would happen to us here on Earth?

To move our solar system would require an incredible amount of energy and careful planning. We could potentially do this with a stellar engine, a class of hypothetical megastructures using a star’s radiation to create usable energy.

Thankfully, with our planets locked in orbit of the Sun due to its immense gravitational pull, we only have to find a way to propel the Sun and our planets and moons will follow.

Russian scientist and aeronautical engineer, Leonid Shkadov, proposed an ingenious method to move our Sun using a giant parabolic mirror known as the Shkadov Thruster. It works by harnessing the Sun’s photons and reflecting them back around the Sun, creating thrust.

Each photon carries a tiny amount of thrust, meaning if you were in space, and you turned on a flashlight, you would eventually move… just very, very slowly. The Sun produces 10 to the power of 45 photons per second.

This impressive energy makes the Sun the most powerful nuclear reactor ever! As a result, we would have to position this parabolic mirror exactly over the Sun’s poles to avoid burning one of our nearby planets.

This limits the direction we could move, and it would likely take us about 230 million years to move 100 light-years. That’s an astronomical amount of time, so is there a faster and more efficient way we could move the Sun?

Astrophysicist Matthew E. Caplan of Illinois State University has proposed a new type of engine called the Caplan Thruster. This stellar engine requires one quadrillion satellite mirrors, known as a Dyson swarm, to orbit the radius of the Sun.

These would reflect the Sun’s energy in a concentrated area, heating it up and shooting the Sun’s mass and solar winds outward, allowing us to utilize the billions of tons of Hydrogen (H) and Helium (He) collected using large electromagnetic fields.

A thermonuclear reactor on board could conceivably convert the Helium and Hydrogen into radioactive oxygen used as exhaust to propel the craft. And any leftover Hydrogen from the Sun would be shot in a jet of plasma using a particle accelerator, pushing the Sun forward and keeping the thruster from being sucked into the Sun’s gravity.

This delicate balancing act would allow us to move in any direction we want at much greater speeds. The real challenge might be building the Dyson sphere itself.

For one thing, we would have to mine Mercury for its rich supply of metals, minerals, and its proximity to the Sun. This would take a considerable amount of time and effort, but could provide us with an almost infinite energy source.

But what would it feel like on Earth when our entire solar system surfs through space? Well, turns out everything might feel more or less the same. Researchers at Illinois State University believe shifting the solar system wouldn’t disrupt our planets’ orbits, since the thrust of a stellar engine would create just a small acceleration overall.

As we orbit the Sun, and the Sun orbits the galactic center of the Milky Way, we don’t feel this movement because it’s constant. If the Earth suddenly stopped moving, however, we’d be in cosmic trouble!

With so many travel destinations in the Universe, we’d still be limited to only a small portion of it known as the Local Group. This collection includes our massive Milky Way Galaxy, the Andromeda and Triangulum galaxies, and about 50 other dwarf galaxies.

Due to the mysterious force of dark matter, scientists have discovered the Universe is rapidly expanding. Even though we can see them, all the other galaxy groups are moving farther away from us at speeds we will never be able to reach. We’d be better off looking for other habitable planets like ours within our own galaxy!

In approximately 4.5 billion years, our Milky Way will eventually collide with the Andromeda Galaxy, forming ‘Milkdromeda.’ At this point, galaxies outside the Local Group will be so far away we won’t even be able to detect them like we can now.

Future civilizations born in the Milkdromeda Universe may think the Local Group is all there is. They wouldn’t be able to learn about the Big Bang and may think the Universe is static and never-ending. So consider yourself lucky to be living in a time where we can research the past and possible future of our own Universe.

Maybe someday we will harness our stellar energy and get to explore our galaxy and make some new friends along the way. This would make us a Type II civilization on the Kardashev scale, which measures a civilization’s technological ability to control and utilize energy.

What If Your Stomach Acid Disappeared?