What If You Were Pregnant With Octuplets? 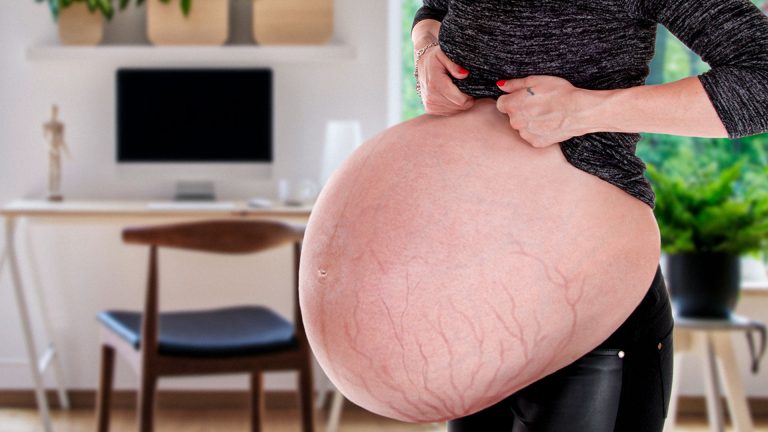 One baby could test the limits of your body and patience. But what if you gave birth to eight babies? How could this process destroy your body? Would you have to give birth to one baby at a time? And how would you get them out?

In 2008, Nadya Suleman made history when she gave birth to eight. I repeat, eight babies. And she had more than just a little help. It took 12 implanted embryos, and a team of 46 doctors and nurses attended to Nadya on the big day. From conception to birth, science guided Nadya and her children to success.

Who knows what could’ve happened without these trained professionals. But even if you had the medical dream team on call, what problems could your babies face? Your body is about to grow out to proportions you never thought possible. Suleman gained more than 59 kg (130 lb) during her pregnancy. With eight kids of your own on the way, expect to expand by at least that much.

If you don’t eat as healthy as possible, you could develop gestational hypertension. The increased hormones surging through your body could even lead to diabetes. But keeping a balanced diet wouldn’t be easy. You’d need to consume an extra 2,400 calories every day. That’s 300 calories per baby. And no matter what you eat, there could be a power struggle brewing inside your body.

Any fetuses sharing a placenta could also share their blood. In twins, this loop could leave one child with too few red blood cells and the other with too many. Now multiply that sibling rivalry by four. Nadya suffered broken ribs while carrying around her kids. But if she had given natural childbirth, the process could’ve ripped her apart.

Instead, her medical team worked around the clock to keep each baby alive and healthy. That’s hard considering most babies born in clusters come out earlier than single pregnancies. The octuplets came out in just 31 weeks while a single baby pops out at 38 weeks on average. If your babies came out too early, it could lead to several health issues.

Babies born prematurely are 16 times more likely to have a low birth weight and five times more likely to have breathing problems. Two of Nadya’s children were placed on ventilators, their lungs still not large enough to function on their own. At this size, even their hearts would be at risk. Sometimes an artery carrying blood to bypass the lungs while still in the womb doesn’t close.

This can lead to problems if not corrected through surgery. That’s not all that can go wrong. In some newborns, an intestinal condition might have a few of them feeding through an IV drip. So how did Nadya give birth to all those babies at once, the heaviest of which was barely 1.5 kg (3.5 lb)? She required a cesarian section, which had each baby removed one at a time.

But your births could have deliveries that last over weeks. Good luck remembering all eight birthdays. Now that you’ve given birth to eight babies of varying sizes in a medicated haze, your body will need rest for the next few weeks. Avoid any heavy lifting and concentrate on holding that couch down. With this many babies, you wouldn’t be able to breastfeed.

Over time, the stretch marks would fade into silver-colored patches. But you might worry more about something else. With your hormone levels returning to normal, you could lose a lot of your hair. Don’t be surprised if you experience anxiety or depression after this physical trauma. Well, that sounds really stressful. What if you could pass on the pressure of getting pregnant? What if men could get pregnant?

What If You Fell Into Lake Vostok?

What If Ticks Were the Size of Humans?

What If the Oceans Were Made of Gasoline?