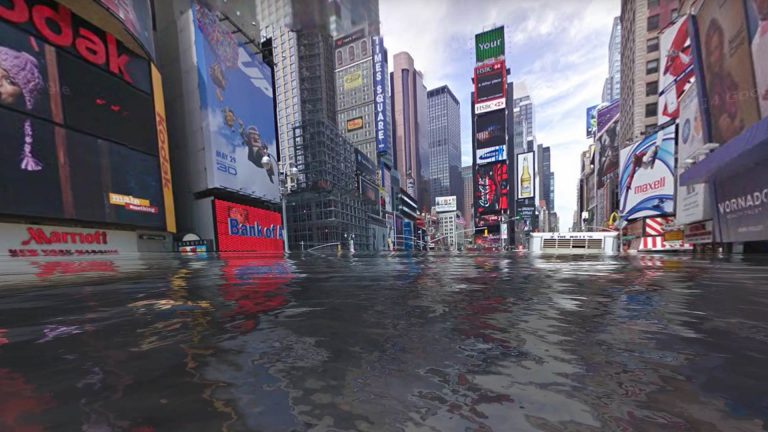 FacebookTwitterEmailWhatsAppReddit
What if climate change was taken to the absolute extreme and the entire planet’s ice melted?

Anybody who had a wading pool or bathtub growing up knows what happens when you try to sit in it and the water’s too high. It makes a wet mess thanks to water sloshing everywhere, and the adults get angry at all the clean-up.

We’re approaching a period in time when our planet will be an overflowing bathtub, as glacial ice melts into our oceans, sending the shorelines further inland and water levels ever higher.

Sea levels have gone up 20cm (8″) since 1850, but it was unevenly distributed around the globe. That’s roughly half the height of a bowling pin, 3.5 times the size of a golf tee or one-tenth the size of Danny DeVito.

It might not seem like a lot, but that’s a global increase, attributed to the slow, gradual melting of glacial ice.

Things have heated up since then. Considerably. Experts warned in 2019 that if the West Antarctic ice sheet collapses into the sea, North America and Europe alone will have a more than 30% increase in sea level rise, prompting evacuations of people in coastal areas, pushing people — and their infrastructure, homes, livelihoods, everything — further inland.

This ice sheet contains ice equivalent to a 3.3-meter rise in sea level alone, yet is itself considered only a small portion of the ice that could be turning into water relatively soon.

This is nothing to sneeze at: the Scientific Committee on Antarctic Research indicates 18 million people could be displaced from Bangladesh and a majority — 66% — of Hindu Kush mountain glaciers could be gone by 2100.

By 2050, we’re talking about 340 million people, of the world’s more than 8 billion, having their lives touched in some serious way by climate change.

If it ever came to the point where all of Earth’s ice quickly melted away, the effects would be global devastation. Shorelines would be reforged as over 70 meters (230ft) of ice water would spread inland. Here’s what our coastal cities would look like in such an extreme scenario when all ice on Earth is gone: 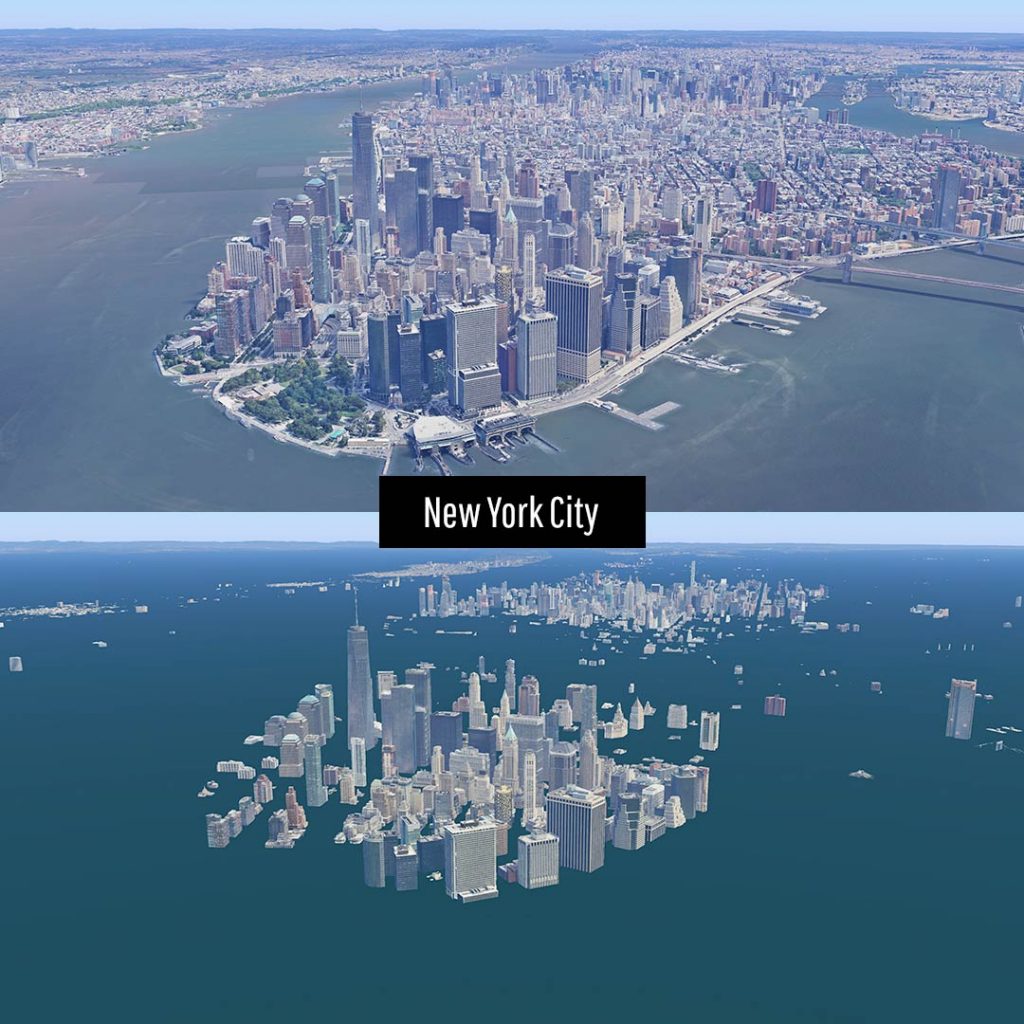 Technically, New York City would be dealing with a sea-level rise of about 66 meters (216 feet) due to its East Coast location, but that still means your new ground floor of the Empire State Building would be substantially closer to the top floor of the city’s architectural 381-meter (1,250 foot) landmark than it is now.

But we know this isn’t about buildings, although there are a lot of them to hold the city’s over 8 million inhabitants. Outside of the skyrises, almost everything would be underwater. 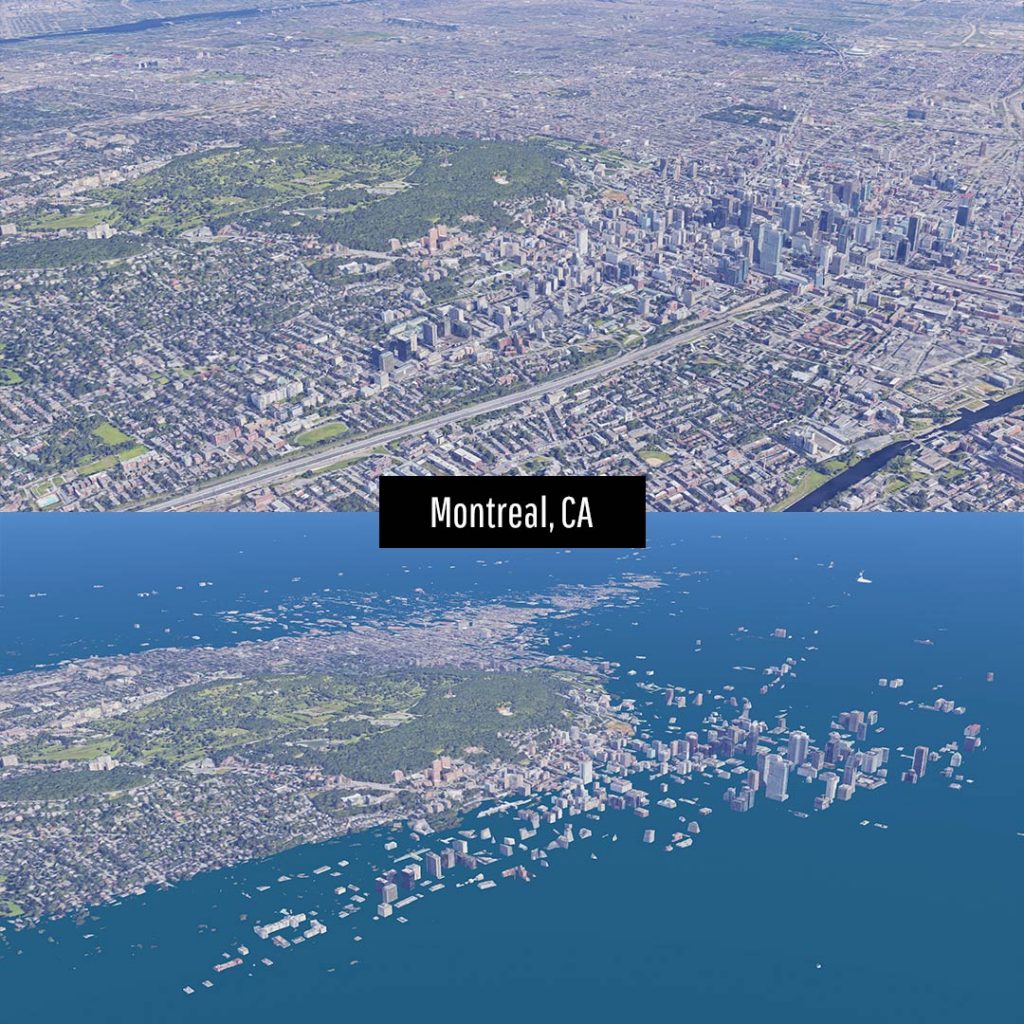 Montrealers would be faced with life not so much as one major urban metropolitan center (surrently the second-largest only to Toronto), but rather a series of islands if they are lucky. While the vast majority of the city would be completely underwater, at least it wouldn’t be facing the same fate of the entire state of Florida — bring a diving tank since it would be gone completely. 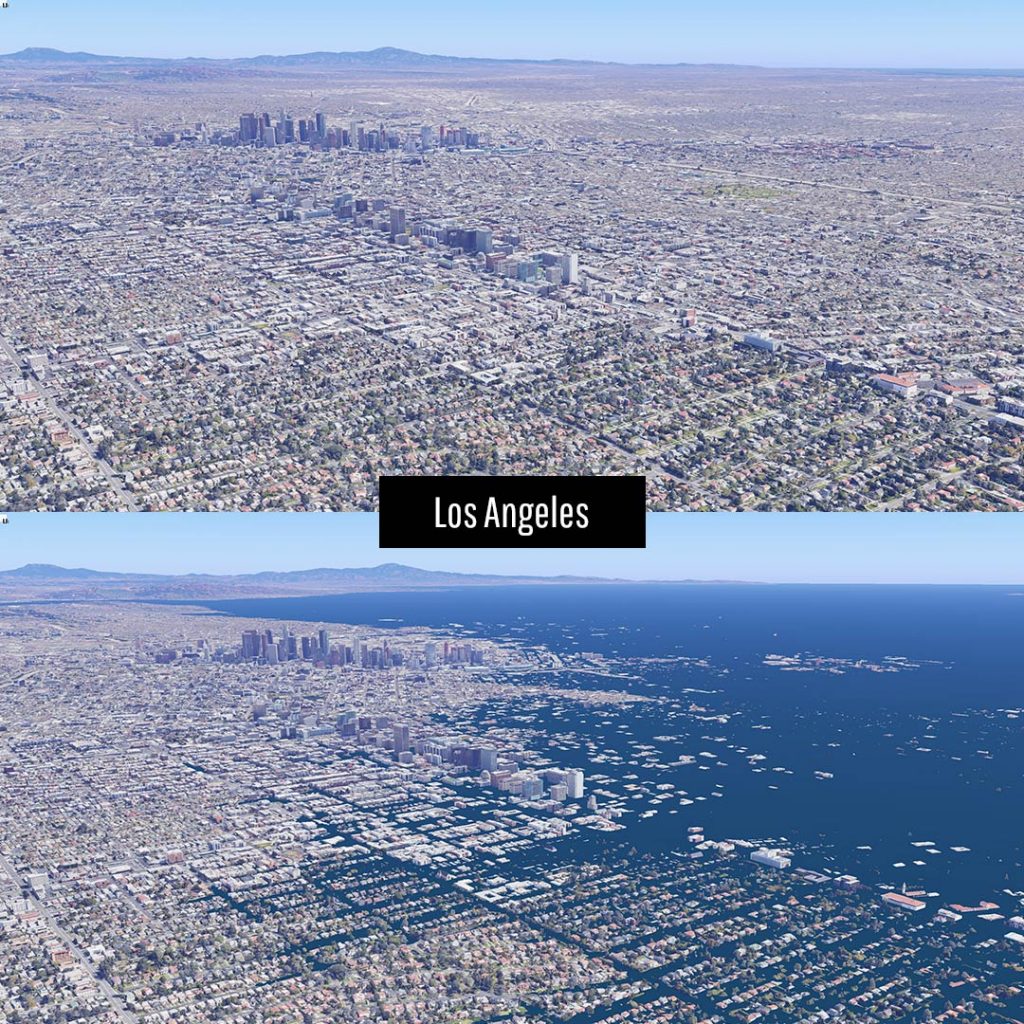 If it weren’t for the fact the omnipresent Hollywood sign in Los Angeles is perched atop Mount Lee, that word’s letters (at 14 meters, or 45 feet in height), representing the hopes and dreams of millions of those wanting to be making a life for themselves in the world of entertainment, would be sunk. Or to be clearer, submerged.

With that comes the harsh reality of over three million homes not on a mountainside that would be suffering the same fate. 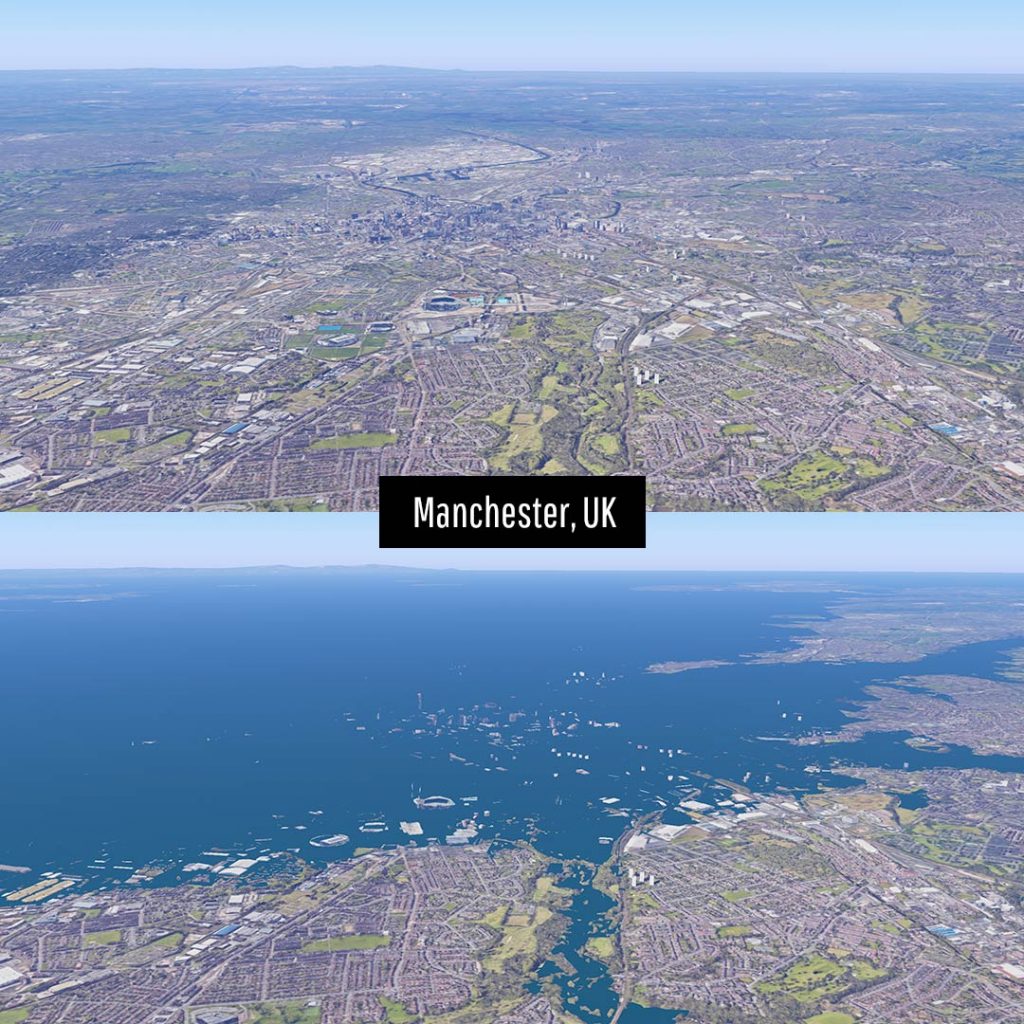 During the last ice age, the fine folks of Manchester know their city was under 4 kilometers (2.5 miles) of ice. Place yourself in these modern times and that history might have been a frightening precursor for Manchester to what this England city would be dealing with in the here and now if sea levels rise by tens of meters. Sure, they might still be able to film Coronation Street there, it will just need to be on a barge. 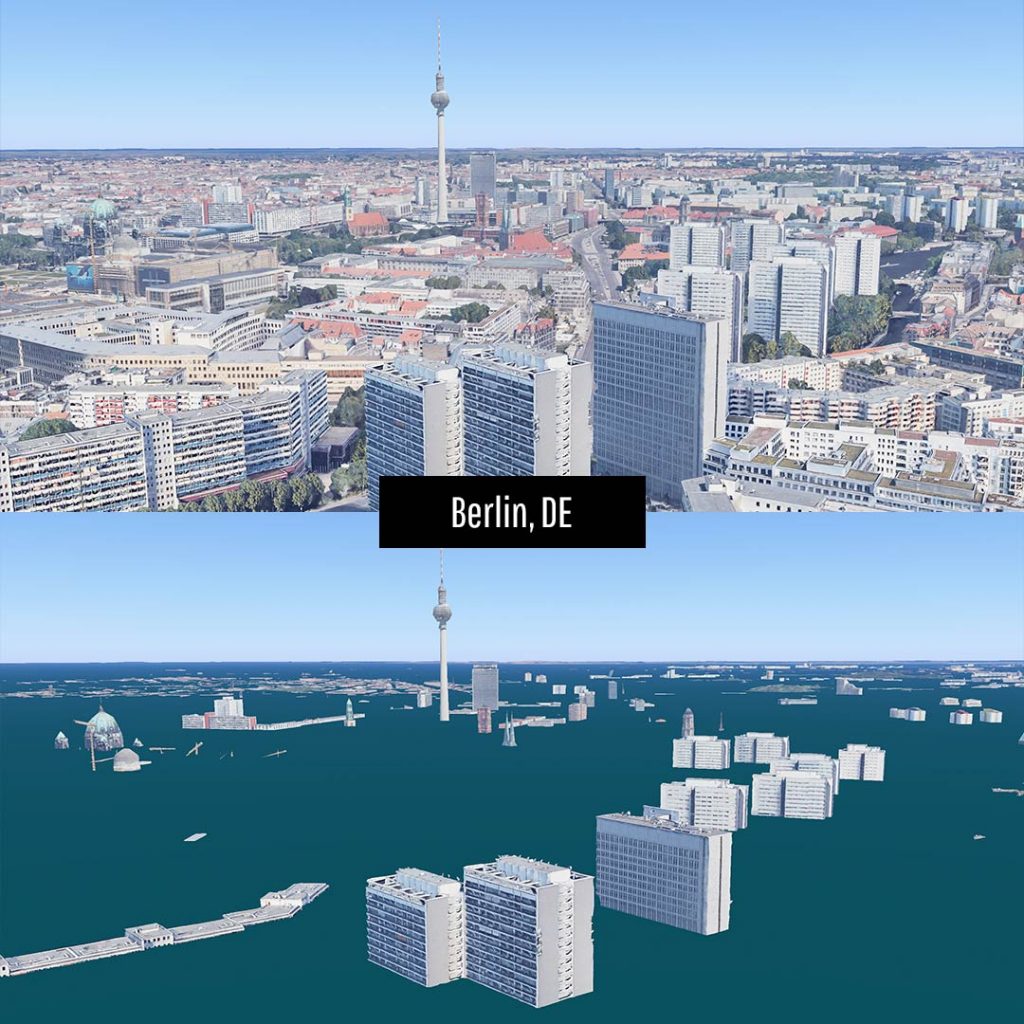 Here’s the thing for Berlin — set aside all of the tacky ‘bet a wall would come in handy here’ remarks and you’re still dealing with the harsh reality that Germany’s coastline would be shifted 400 kilometers (250 miles) south. With that would come the unceremonial ending of Berlin as it finds itself completely underwater. And for the record, just like back when the city actually had one a wall wouldn’t really do any good here. 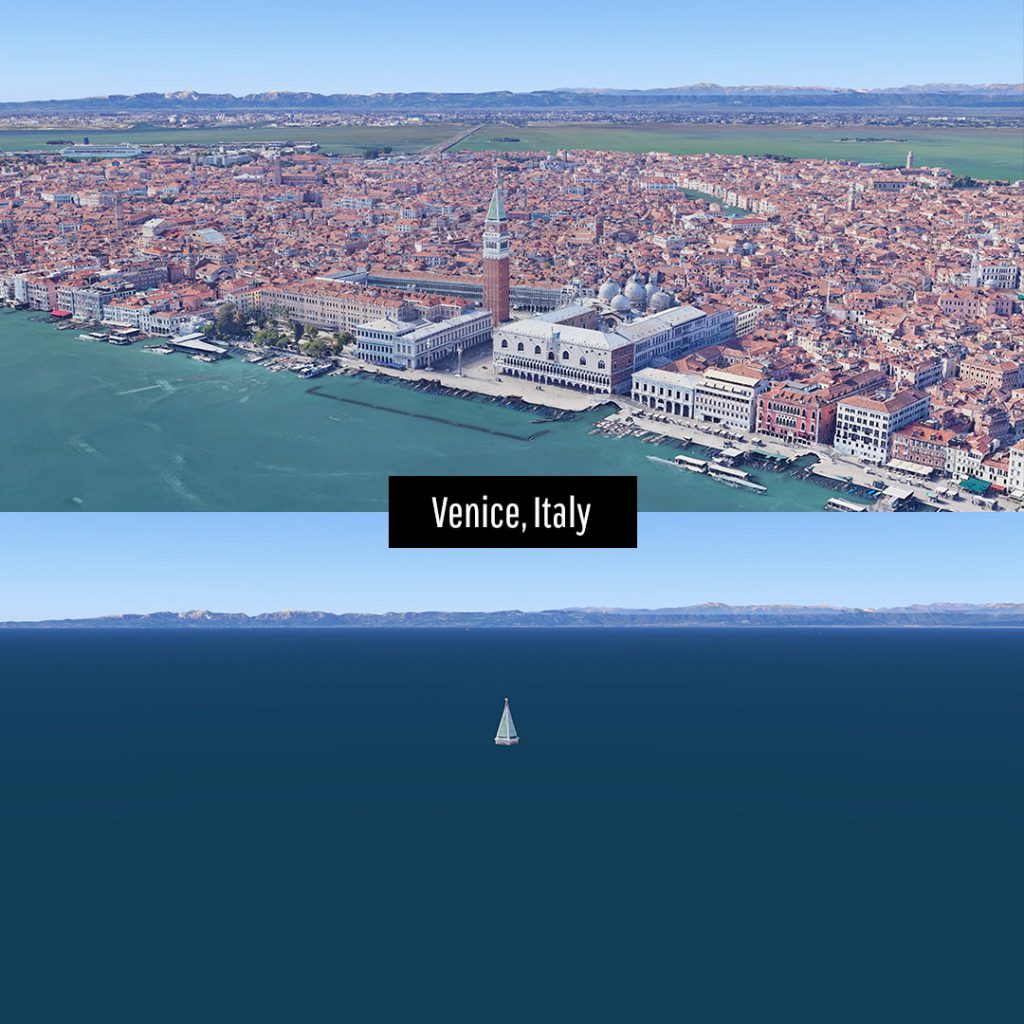 Already Venice has had to deal with some recent flooding caused by rising sea levels, with record waters hitting approximately 70% of the city in 2019. Currently, Venice is accustomed to what is known as Acqua Alta, seasonal high waters that hit the city between autumn and spring. Already, the city is reeling from nearly 60 of these blasting it every year, compared to just 10 approximately 100 years ago. Unfortunately for Venetians, the next major Acqua Alta in this timeline would be the last for almost all of them. 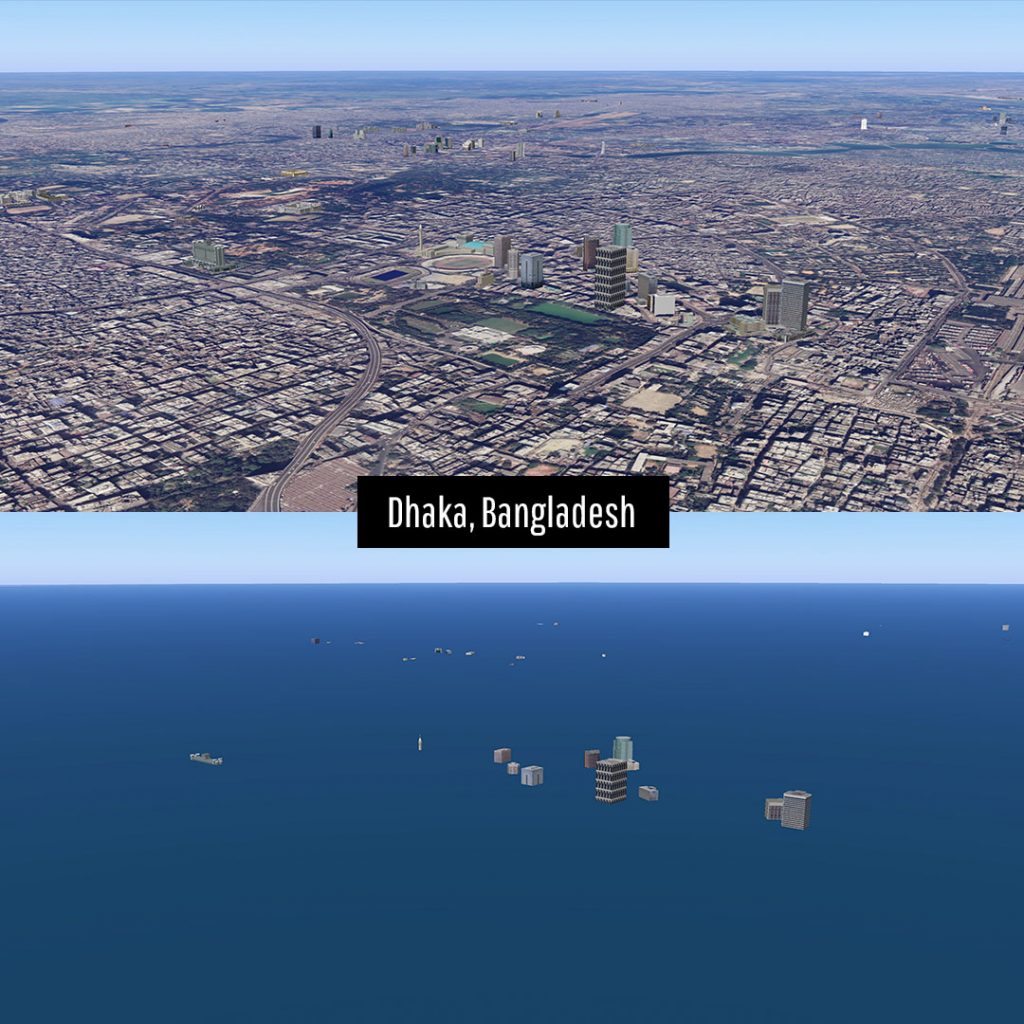 The capital city of Bangladesh, Dhaka is center among the nearly two billion people of South Asia we already know could find their lives forever changed with current rising sea levels over the next 80 years. The country already experiences extreme seasonal fluctuations linked directly to sea levels, and with this scenario pushed into the present-day Dhaka and all of its neighbors will find themselves like 25% of the country already is — flooded. 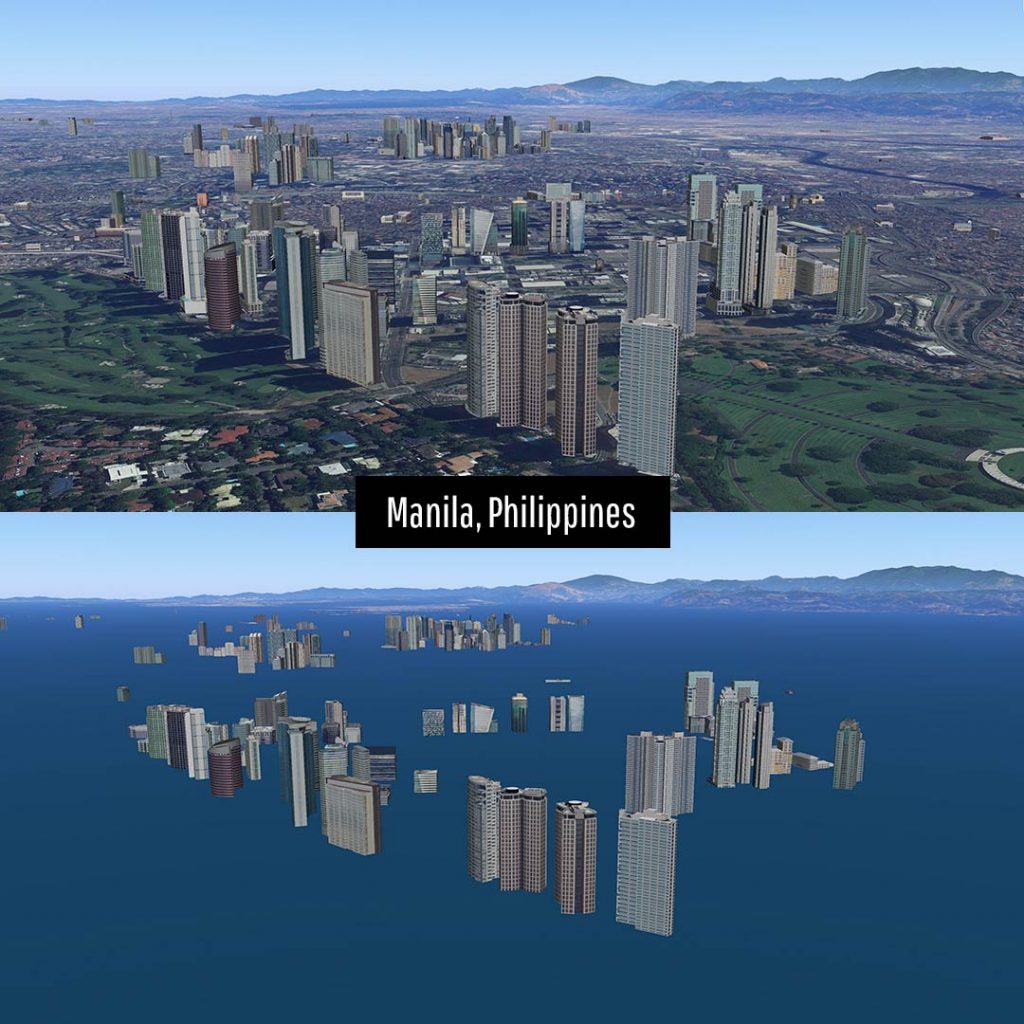 Over the past several decades, the 14 million people of Manila have tried to slow the rising levels of the Pacific Ocean by pumping the increasing amounts of groundwater out from under them. That still meant a rising coastline to look out on, all while the city collapsed like a bowl in the center. Unfortunately, in this situation, not only this urban bowl but the entire city is going to be filled — completely — with ocean water. 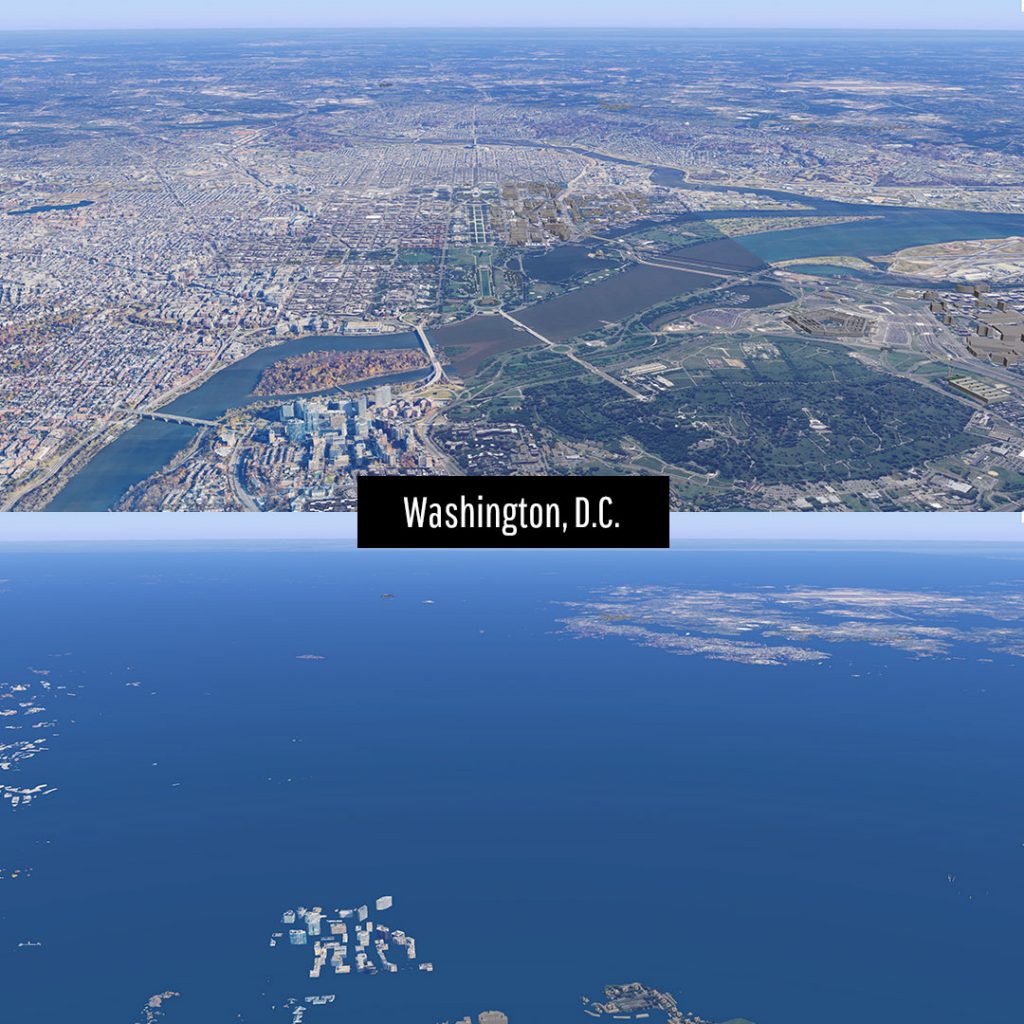 Although it is landlocked, it is already predicted that with the current climate change rates Washington, D.C. could find itself with rivers that are nearly 3.5 meters (just over 11 feet) higher by 2100. That’s not a number to shake a stick at, and already that puts the Reagan National Airport and the National Mall underwater. Taking this to our extreme, Washington would be an ocean-side city, complete with a front-row view of the Atlantic Ocean which would probably require a personal floatation device to enjoy. 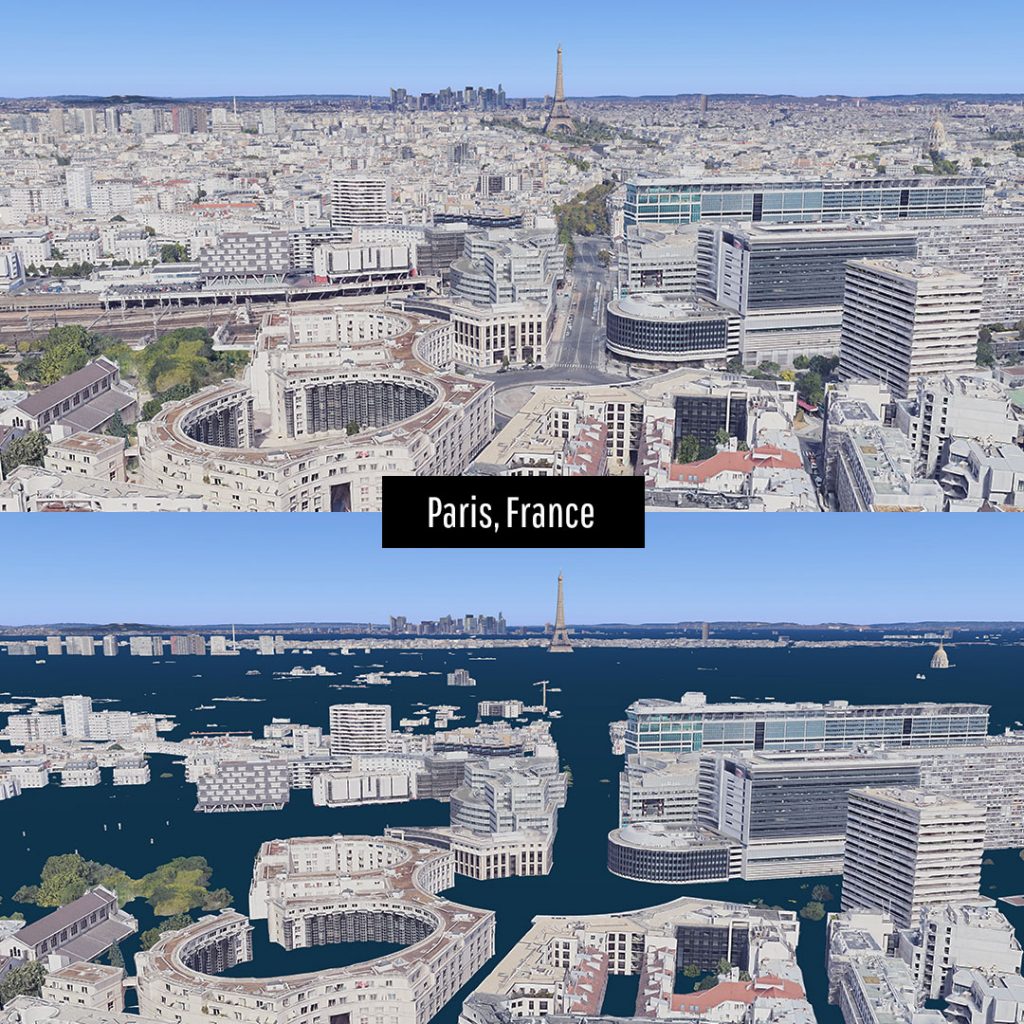 Back in 1910, Paris found itself being compared to Venice after flooding kept it partially underwater for two months and famous streets like Rue de Maine had boats floating up and down them. It is now known as la grande crue, or the great flood. Today, there’s a handy statue the people of Paris used to judge when the city’s river, La Seine, is rising too high. They’ll need a few dozen of them to measure this scenario’s levels, and as they do Paris will be flooded away.

What If the Sun Was a Blue Star?