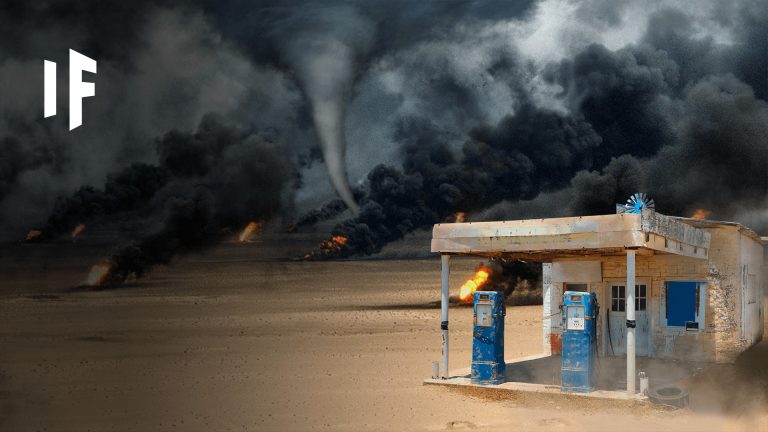 What could you do to stop a giant fire tornado? Or anchor a floating house?

If your answer is “probably nothing,” then you’re just like most of us who stare blankly at images like these on our screens every day. Sure, we know that these are the kinds of extreme weather disasters that were predicted to get worse with climate change.

And yeah, we know what to do to avoid the worst impacts of climate change. But as long as there are giant corporations and trillions of dollars clinging to the oil industry, it all seems pretty overwhelming. So maybe it’s time to give up.

These companies are not going to stop polluting on their own. So, if they burned through all the oil, would it really matter, in the end? How much oil can we afford to burn?

How fast can we move out of oil into renewable energy? And what are the stakes for our communities and the planet?

In 2018, the Earth had about 1,730 billion barrels in crude oil reserves, with oil companies pumping out about 94.7 million barrels each day. The Wall Street Journal estimates that ExxonMobil, Chevron, Shell, BP and Total pocketed about $84 billion dollars that same year (2018).

These corporations are making a pretty penny on burning oil and releasing carbon into the atmosphere, but each one of us and the planet are paying a very high price for it. Increasingly extreme weather disasters, human misery, and massive extinction, among many other impacts of climate change, show us that we need an immediate and ambitious transition into renewable energy. We cannot afford to keep burning oil and other fossil fuels as those companies would want us to.

So, what are our options for a viable future?

Throughout the years, society has had a love/hate relationship with oil. On one hand, it’s used to create a lot of products we use everyday. And no, I’m not just talking about filling up our gas tanks.

This didn’t just happen out of nowhere. Oil companies have worked hard for years to make sure people depend on their products, while misleading the public about the climate damage they were causing.

According to Richard Heede from the Climate Accountability Institute, 90 carbon producers are responsible for nearly two-thirds of global industrial greenhouse gas emissions between 1751 and 2010. And of those 90 polluters, the top four contributors are the all-too-familiar oil companies Saudi Aramco, Chevron, ExxonMobil, and BP.

Simply put, burning oil releases carbon dioxide into the atmosphere, which then makes the average temperature on Earth hotter. A study led by the Union of Concerned Scientists estimates that carbon and methane emissions from the 90 largest carbon producers contributed to nearly 50% of the rise in global average temperature between 1880-2010.

And yes, we know you’ve probably seens hundreds of graphs, animations, and presentations explaining how bad the impacts of a hotter planet can be. But now, those impacts are becoming very real and making our planet less safe.

A changing climate leads to increases in the amount of extreme weather, including deadly heatwaves, severe drought, and wildfires. And it doesn’t stop there. Increasingly hotter temperatures, and more droughts, lead to lower corn and wheat crop yields. Having less food available causes prices to spike, and food shortages.

The Intergovernmental Panel on Climate Change has predicted that reaching beyond 1.5 degrees Celsius would make extreme temperatures more likely, increasing heavy rains in some regions while creating record droughts in others. We have not even reached that limit and there have been unprecedented bushfires and floodings in many regions.

Climate change is already having a negative impact on us and the way we all live. The same panel estimates that climate change will make those already in poverty even poorer.

It will also have a negative effect on displacement and immigration flows, particularly on communities that depend on agriculture. And we know all that could ultimately escalate into social conflict, and create political tensions between countries.

So what would be a good replacement for oil? Any other fossil fuels, such as coal or gas, would cause a lot of the same problems. And replacing everything we use oil for, by turning to renewable energy, would be too expensive, right?

Well, in reality, replacing oil and even fossil fuels in general with renewable energy would actually save us money. And we already have a strategy we can use.

In the US for example, the transition to clean and renewable wind, water and solar energy would start with an investment of $7.8 trillion. And this investment would pay for itself over time from energy sales.

It would create 3.1 million net US long-term, full-time jobs and save 63,000 lives from air pollution each year in the country. It might sound a little too good to be true, but we’re already seeing strides towards making it a reality.

In 2018, the world had more than one terawatt – one trillion watts – of solar and wind capacity installed. And by 2023, we’ll have another terawatt of capacity, at half the cost of the first.

As Elon Musk puts it: “We have this handy fusion reactor in the sky. You don’t have to do anything, it just works. Shows up everyday and produces ridiculous amounts of power.”

This all sounds great, but do we still have the luxury of continuing to burn oil? Not exactly.

You see, if corporations keep extracting the reserves of oil and other fossil fuels we know about, there will be nearly 942 billion tonnes (almost 1 trillion tons) of carbon dioxide released into our atmosphere. That would result in global warming of 3 degrees Celsius (5.4°F), 4 degrees Celsius (7.2°F) or even higher, which is way beyond the limit of 1.5 degrees Celsius (2.7°F) that experts agree is the point of no-return for our planet.

So instead of playing the waiting game, it’s time to actually do something about all the environmental problems we see in the media. Instead of feeling overwhelmed, and thinking of climate change as only your responsibility, start putting it on the real culprits: the corporations that produce the most carbon emissions, and the governments that let them get away with it.

Get out there and vote, whenever you can, for government leaders who will push for enforceable social and environmental laws, and won’t be captured by corporate interests. Maybe one day, more governments will take a strong stance against these corporations, and make them pay every time they hurt us and our planet.

But if burning oil creates more CO2, wouldn’t plant life thrive since they breathe in CO2 and out oxygen?

What If You Ate Plastic?