What If the Megalodon Shark Fought the Leviathan Whale? 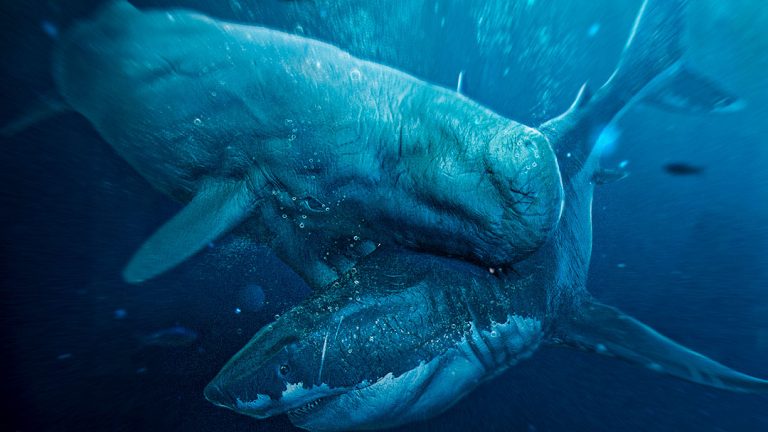 Don’t be fooled by these gentle waves. These still waters hide a 20 million year death match between two prehistoric monsters. Grab some popcorn and a snorkel. You have a front-row seat for the ultimate aquatic showdown between the megalodon shark and the Leviathan whale. Which would have the bigger bite? How big could a megalodon grow? And how fast could a Leviathan whale swim?

Twenty million years ago, these creatures dominated the oceans, and they may have fought before that. Although they’re long gone, you can still see the remains of these giants in their descendants. Just look at the sperm whale, which descended from its toothed ancestor. Even this monster doesn’t compare in size to the Leviathan.

And while you might think that the great white descended from the megalodon, it’s closer to the blue shark. See that snubbed nose and flat jaw? But if we could see these two giants face off now, who would win? Before we get to the main event, let’s run down the stats on these fighters. The Leviathan whale grew to almost 18.5 m (61 ft) in length in its heyday.

While today’s sperm whale relies on suction to lure its prey, this monster had teeth the size of bowling pins to rip its meals apart. Its massive mouth had the largest tetrapod bite recorded, and it fed on other whales. But these teeth were not this killer’s only weapon. Some scientists theorize that the sperm whale uses its unique organ, the spermaceti, to control its buoyancy during deep dives.

The waxy substance inside hardens and lets the whale sink into the water easier by filling this body part with cold water. But since the Leviathan didn’t hunt deep-sea creatures, researchers think that this organ could have been used as a battering ram to hammer prey into submission. Scientists also wonder if this organ could have increased the whale’s echolocation ability.

That means a Leviathan could have stunned its target with a sonic blast. But how would the megalodon handle this powerhouse? Well, don’t count out this predator yet. Tests have dated megalodon shark fossils back two and a half million years. And the largest bones found were almost 18 m (59 ft) long, making this the largest fish to ever to roam the seas.

This shark had one of the most powerful bite forces of any predator on Earth. And with 276 serrated teeth that measured almost 18 cm (7 in) long, this terror has earned its fearsome reputation. Like the Leviathans, megalodons fed on large whales, sharks and dolphins.

These gigantic creatures were so fierce that some theories state their babies would devour each other alive while still developing in their mothers. But you didn’t come here for Baby Shark.

Let’s get to the main event. Weighing in at almost 60 tons, the megalodon would outweigh the Leviathan. The shark might have seen the whale first while on patrol, giving it ample opportunity to attack first. While the whale comes in at only only 45 tons, this killing machine is much more intelligent than its opponent and could try different tactics.

If the Leviathan had used its agile swimming maneuvers to get at just the right angle, its sonic boom could stun the megalodon. Then the whale could ram the massive shark with its head. But this warm-blooded mammal couldn’t stay underwater forever. It had to come up for air. That could give the megalodon the opportunity to chase its deadly prey.

Speeding along at 17 m (55 ft) per second, this ancient shark could have cut through the water fast and landed a bite on the Leviathan’s fin, making the whale all but helpless. If the meg caught ahold of the fin, it could tear through the whale like a steel trap. Remember, this predator relied only on instinct and sheer power. And unlike the Leviathan, it did not back down.

But if the whale managed to bite the shark’s soft underbelly, it could have a chance of tearing apart its spine. With a bite superior to the megalodon’s, a few strategic whale chomps would end this fight once and for all. While most people online give this fight to the megalodon shark, the Leviathan whale has the speed and wits to come out on top.

What If the World Lost Oxygen for an Hour?

What If Earth Was Spinning at the Speed of Light?